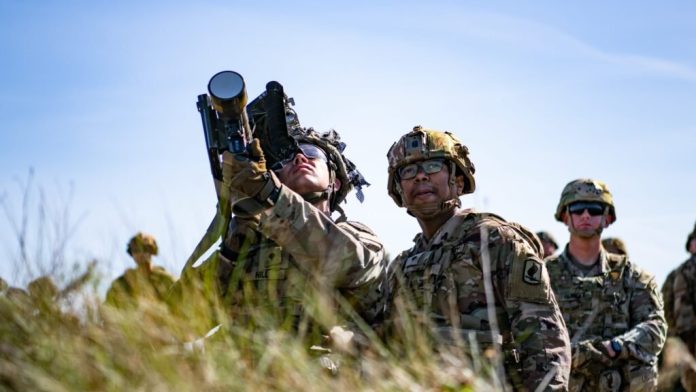 U.S. Army paratroopers assigned to the 173rd Airborne Brigade practice acquiring a target with a FIM-92 Stinger during an air defense live-fire exercise alongside soldiers with the Croatian Air Defense Regiment. This training is part of Exercise Shield 22 at Kamenjak near Medulin, Croatia on April 8, 2022. (U.S. Army photo by Staff Sgt. John Yountz)

WASHINGTON — The Pentagon’s top acquisition official is signaling he could be amenable to putting certain high-priority munitions on multi-year contracts to fulfill ongoing Ukrainian requirements and replenish US stockpiles.

“What really matters is contracts,” said Bill LaPlante, undersecretary of defense for acquisition and sustainment, during the Defense News conference today. “We buy munitions and many of these things in a single year. We don’t do multiyear contracts.

“We do multiyear contracts for ships, we do it for airplanes, we don’t do it for these other munitions. We need to do it because that’ll stabilize the supply chain. That will send a signal to industry to say, they’re in it for the long haul, and we can make the commitment.”

LaPlante’s comments come a couple months after Lockheed Martin CEO Jim Taiclet said it would take “two to three years” for a ramp up in US defense spending to result in contracts that impacted the company’s bottom line.

“The clutch isn’t engaged yet,” Taiclet said in July, according to Defense News. “And the clutch engaged means there are contracts in place, there’s a demand signal out there that’s clear, there’s funding appropriated by the U.S. Congress ― in the case of the United States ― and we’re producing … with a supply chain that’s robust enough to support it.”

Due to the demand from the Ukrainian military, Lockheed has had to ratchet up production of both Javelin anti-tank weapons, which the company makes with Raytheon Technologies, and the M142 High Mobility Artillery Rocket Systems (HIMARS). In the near term, however, Lockheed’s sales have been lower than expected, and Taiclet said the company has had no guarantees that internal investments in HIMARS and Javelin production would ultimately pay off.

“The question is, how much higher can we take it over the next number of years?” he said. “The reality is today, none of it is under contract.”

LaPlante, in his comments today, said he agreed with Taiclet’s criticisms. The United States has a history of keeping munitions production at a minimum viable rate, and then shutting down production whenever a certain procurement quantity has been met or when peace breaks out, LaPlante said.

This mindset led to the Defense Department shutting down the Stinger anti-aircraft weapon production line in 2008, pausing HIMARS production between 2013 and 2017, and “barely” keeping frequently-used weapons like the Tomahawk missile in production every year.

“What we’ve asked the Congress for … is a fund that would allow us to keep these production lines running hot …on these munitions and other things so that when an FMS case comes along, we can just take the thing off the line and give it to them. Because if we don’t have the production line going, the FMS case will take forever,” he said.

“And so what that means — and this is a culture shift for us, as a country — we have to be comfortable as taxpayers funding production lines to produce things that the US may never use. And that’s something that we as a country have to struggle with.”

Shifting munitions production to a multi-year procurement process would require approval from Congress, and LaPlante acknowledged that “some people don’t want multi-year contracts” due to concerns about lack of oversight. In the meantime, LaPlante said he is trying to give industry officials more information about the Pentagon’s thinking with regard to future spending.

“We in the department, and with the Hill, need to give [industry] a better plan. This is what I think they’re asking for. And I agree with it.”

US, Partners to Meet on Ukraine War Supply Chain Shortages