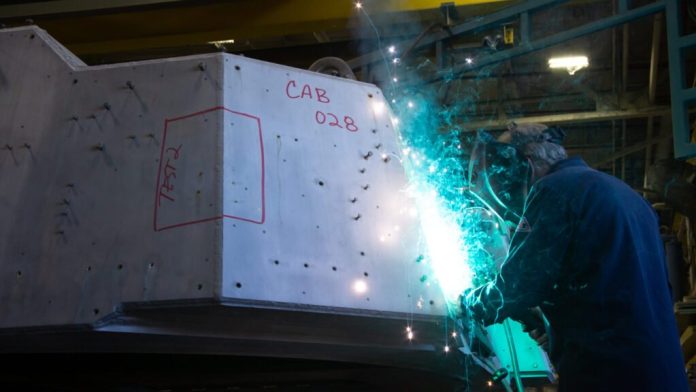 LETTERKENNY ARMY DEPOT, Pa. — Just over 100 miles northwest of Washington, DC, leaders of a small Army depot are planning major updates to their facilities in order to prepare for future battlefield systems that will eventually be fielded through the service’s rapid technological modernization.

“It’s really important for us to keep track of Army modernization. If we wait until a system goes into a sustainment cycle for us to be able to tool up and facilities up, it’s way too late,” Kate Williams, director of the office of strategic management at Letterkenny Army Depot told Breaking Defense during a recent visit. “So we’ve got to really put our plans in place now to align ourselves to meet the future capabilities.”

The Letterkenny workforce focuses on repairing the Army’s air and missile defense platforms, in addition to some precision fires platforms. On any given day, the facilities are lined with skeletons of High Mobility Artillery Rocket System or disabled parts of Patriot radar systems.

But to prepare for the future, leaders at Letterkenny Army Depot have their own $1.4 billion modernization plan to upgrade facilities, equipment and workforce to prepare for the service’s next generation of air defense systems, which includes laser systems to protect soldiers from small drones and artillery.

With nearly 30 percent of the Army’s 35 modernization priorities aligning with air defense or precision strike capabilities, Letterkenny has to start the transformation now, while continuing to sustain the Army’s present operational systems.

“We need to build the right facilities at the right time with the right equipment and the right skill sets prepared to provide service to the sustainment community,” Williams said. “It’s a balancing act for a depot, right? We’ve got to be agile, we’ve got to be flexible. We’ve got to put things in place now, but not pull the trigger before it’s time.”

Revamp Could Include Laser Test Range

As part of its plan, the depot wants to house a a high energy laser test range, according to Chris Ghigliotti, electronics engineer at Letterkenny. The range would allow other government agencies and contractors can test their equipment.

“LEAD [Letterkenny Army Depot] is currently working on an investment plan for a high-energy laser (HEL) below-the-horizon engagement range utilizing the LEAD-owned mountainside as a backstop,” a spokesperson said in a follow-up email. “This range would provide the DE [directed energy] community added test capacity for below the horizon realistic drone engagements in the northeastern US environment.”

The challenge, however, is convincing senior leaders the investment is worthwhile.

“It is a concept that we will pass up through our leadership, and it’ll have to be approved at levels above us before we can facilitize for that,” Williams said. “We are trying to put ourselves in the best position with the best knowledge with the best kind of business cases for air missile defense systems so that our leadership can make a decision as far as where those investment dollars go.”

While many of the Army’s top modernization priorities are still in the midst of the development phase, Letterkenny is already using new processes that officials hope will provide beneficial in the future.

For instance, as part of the facility’s current work, it’s modifying M109A7 Paladin turrets to become the XM1299 Extended Range Cannon Artillery turret, one the service’s top 35 modernization priorities. To improve quality assurance processes, the depot has invested in blue-light scanning, which it uses on the ERCA turret. That kind of scanning makes it possible to build a digital model that can be used to identify manufacturing flaws.

“We’re able to show how the depot can provide support today on those future systems with our applications with cold spray, blue-light scanning and 3D printing,” Williams said. “We provide a good opportunity for Army Futures Command, who are directly working with OEMs [original equipment manufacturers], to partner back with the depot on signature modernization efforts.”

According to Dale McClanahan, chief of the business development office at Letterkenny, the depot is currently rewelding the turrets and completing high voltage cabling for ERCA.

“What we did … is we demonstrated a technical competency that says, ‘Hey, these guys can do this,’” McClanahan said.

The depot has also invested in a new way to repair rusty parts of vehicles without having to replace the piece entirely. That’s done through an additive manufacturing technology called cold spray, which shoots a powdered metal through a spray gun under high pressure and at a high temperature in order to restore the surface.

In one recent success story, a HIMARS vehicle had corrosion on its roof. If not for the cold spray, the whole cab would’ve had to be replaced, according to Ashley Filling, a production engineer at Letterkenny. That would’ve cost $750,000 and knocked the vehicle out of service for over a year. The cold spray completed the roof in about a week for less than $2,000. The additive manufacturing technique gives the Army a cost effective way to repair vulnerable areas on vehicles to increase soldier safety, depot officials said.

“Anywhere where this armor material was thinner because of corrosion could be a spot that would be weaker on the cab, if it would need to be strong if it got a shot at or an explosion,” Filling said. “So this material that we sprayed it with is actually harder than the armor.”

Filling said that the depot is training its welders to be cold sprayers. In the future, it would like to automate cold spraying for the longer sprays, which can be more physically intense.

Such techniques can make the Army’s ambitious modernization plan more cost-effective, but with the lives of the end users — American soldiers — on the line, depot officials know the products that roll out of their facility have to meet high standards.