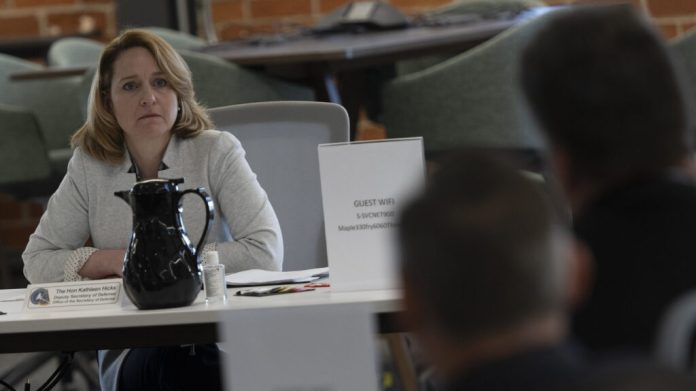 WASHINGTON — The Pentagon’s new directive on space policy moves away from the aggressive language of Trump-era space policy documents — in particular avoiding the term “space superiority,” which has been used by Russia and China to claim US intent to weaponize space.

The directive also officially codifies the responsibilities of the Space Force, Space Command and the assistant secretary for space policy, as well as formalizing the “tenets” of responsible behavior for the military laid out by Defense Secretary Lloyd Austin in a memo last year.

The new document, “DoD Directive 3100.10 Space Policy,” is an internal Pentagon document, replacing the 2012 version that was last updated in 2016. It was signed on Aug. 30 by Deputy Defense Secretary Kathleen Hicks, and made public Monday. It also reflects the agreement signed last year by SPACECOM and the National Reconnaissance Office regarding their roles in defense of the spy agency’s own satellites.

The document does not represent the end-all-be-all for DoD’s guidance in space. Different presidential administrations have promulgated other types of documents to guide DoD space policy over the years, in addition to National Space Strategy framework documents that capture the roles of other departments and agencies such as NASA — making historical comparisons among administration policies a bit complicated.

That said, for the most part, US space security policies have remained broadly consistent in their strategic goals. What has differed is the extent to which different administrations have emphasized the need for hard power options in space, as well as the “signaling” language about US military intentions. On the world stage, words matter and even subtle changes in US space policy documents can profoundly reassure or rattle allies and adversaries alike

For example, the Obama administration in 2011 issued a National Security Space Strategy [PDF] coordinated by DoD and the Office of the Director of National Intelligence (ODNI) as a top level guidance document for DoD. That was followed by the 2012 version of Directive 3100.10, and its 2016 update.

The Obama strategy moved away from what arguably was a strong “unilateralist,” anti-treaty bent to the language used by the administration of George W. Bush that had alarmed allies, instead focusing on working cooperatively with other nations and commercial partners to achieve US space security goals.

Despite the August 2019 stand up of SPACECOM and the December 2019 creation of the Space Force, DoD did not update 3100.10 afterward. Instead, the Pentagon in 2020 issued what it called a Defense Space Strategy, in both an unclassified and classified format. That document was not signed by the ODNI, but DoD officials said at the time that it was “coordinated” with Intelligence Community agencies.

Trump-era space policy language, in effect, reversed the Obama language and revived controversial Bush-era terms such as “space superiority” and “space dominance.” The Defense Space Strategy predictably piqued the Russian government to issue a statement tagging the document as reflective of “aggressive” and “destabilizing” US military intentions.

The new DoD directive avoids loaded political terms, even eschewing any reference to “offensive” operations and capabilities or “orbital warfare” (language that is found in DoD space doctrine and Space Force guidance papers.) Instead, it talks about SPACECOM’s responsibility to ” defend U.S. vital interests, deter conflict, and, if necessary, defeat aggression” and the need to develop “combat” capabilities to “defend against and counter the hostile use of space.”

It also includes robust language about the need for partnerships with allies and friendly governments, as well as commercial partners — including the need to defend them “if directed” by the DoD secretary or “other appropriate authority.”

Brian Weeden of the Secure World Foundation characterized the new directive as in line with other policy guidance documents issued by the Biden administration, such as the December 2021 United States Space Priorities Framework.

“Nothing, I’d say, unusual or unexpected,” he summed up.