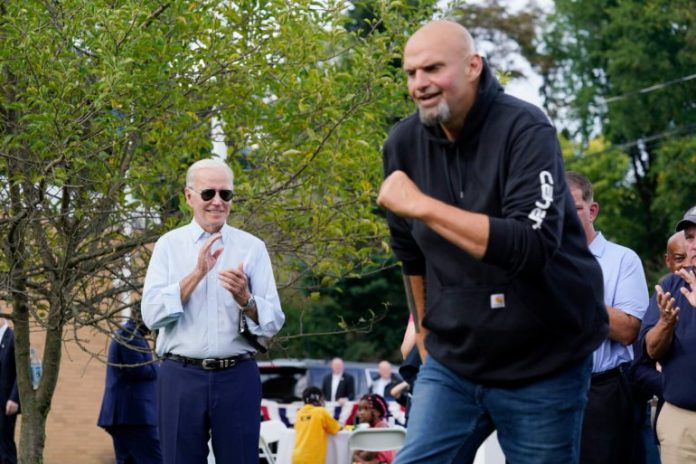 Most of us remember Ahmaud Arbery. He was a black jogger who was stopped by three men, then shot and killed. Two of the men who were convicted of murder got life sentences and a third got 35 years.

The Democrat candidate for US Senate in Pennsylvania, John Fetterman, had a similar incident in his not-so-distant past. Back in 2013, when he was the mayor of Braddock, Pennsylvania, Fetterman thought he heard gunfire. When he then saw an unarmed black man jogging by, Hizzoner grabbed a shotgun and chased down the jogger and held him for police.

What’s more, given Fetterman’s affinity for gun control laws, why did he have a shotgun at all? Why didn’t he let police handle the situation? Can you spell hypocrite? Or does he use his gun ownership as he “cred” to sell his anti-gun views (from his campaign website) . . .

True public safety also must include ending the tragedy of mass shootings in this country. The United States is the only country that sees this level of mass shootings, and we have the power to end it. I’m a gun owner, and I’ve been around guns my whole life. I want what an overwhelming majority of Americans, including the majority of gun owners, want – which is common sense gun safety measures. We need universal background checks, red flag laws, and more proactive efforts to get illegal guns off our streets.

Nevermind that the USA actually ranks 64th in the number of mass public shootings. But let’s not allow reality get in the way of a good soundbite.

The bigger question though involves the racism component of the story. Is John Fetterman a racist bigot? Because it seems that gunfire plus a running black man equals a criminal trying to get away in Fetterman’s mind.

Never mind the runner was dressed in running apparel. And unarmed. And never mind that Fetterman wasn’t a cop in his tiny town or trained as one anywhere else.

In February 2020, Ahmaud Arbery, 25, was murdered while jogging in Satilla Shores, near Brunswick in Glynn County, Georgia. Three white men pursued Arbery in their trucks for several minutes, incorrectly believing him to be a burglar. Arbery tried to run away, but the men prevented his escape and eventually shot him and recorded themselves doing it. National outrage erupted over the shooting and the botched investigation, but all three men were found guilty last year.

This story bears a striking resemblance to an incident from nine years ago involving John Fetterman, the Democratic nominee for the U.S. Senate in Pennsylvania. Yet, there’s a good chance you haven’t heard the story.

In 2013, John Fetterman, who was mayor of Braddock, Pa., at the time, saw a black man jogging after hearing what he thought was gunfire. After the noise, he brought his child inside to safety and dialed  9-1-1. Instead of waiting for authorities to investigate, according to the police report, Fetterman grabbed his shotgun and chased an unarmed black man down, holding him at gunpoint until the police arrived.

Fetterman was never charged after police showed up. He claimed that he thought he heard gunfire and that he couldn’t discern the jogger’s race, but even Philly’s Democrat former mayor Michael Nutter calls BS on that. Also from PJ Media . . .

Fetterman’s primary opponents called him out over the incident during a televised debate, questioning his motives and his lackluster explanations for his behavior. Pennsylvania Democrats also expressed concern that the incident could reduce the turnout of African Americans in the upcoming midterm elections. Without significant minority turnout in the cities of Philadelphia and Pittsburgh, Democrats are unlikely to prevail in November.

“He’s not shooting straight on this, no pun intended. Just fess up. Apologize,” Michael Nutter, Philadelphia’s last Black mayor, told NBC News in April. “All this other stuff — that he was the chief law enforcement officer or that he didn’t know the guy was Black — just doesn’t really sound like he wants to tell the truth.“

Nutter added, “It’s not helping him. Figuratively speaking, he’s shooting himself in the foot, and he doesn’t have to.”

Fortunately, the gun-toting then-mayor didn’t shoot the innocent jogger. But it does show his views towards African-Americans.

In ordinary times, a guy like that wouldn’t have a prayer of getting anywhere near a federal elected office. However, after Joe Biden allegedly got 81 million votes in 2020, anything’s possible. And both Biden and Fetterman have similar oratory skills.

This man is deeply unwell and I’m sick of being gaslit into thinking that he’s perfectly fine mentally. pic.twitter.com/FLA95EeoA0