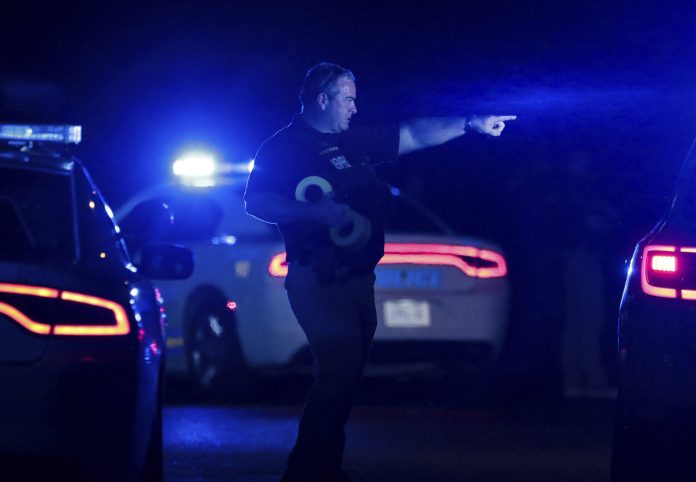 Ezekiel Kelly was convicted of attempted murder in 2020. Probably as part of the process of “reimagining” criminal justice, he was released in March of this year. After a new warrant was issued for first degree murder against him yesterday Kelly drove around Memphis last night shooting people at random and livestreaming the carnage.

A gunman who livestreamed himself driving around Memphis shooting at people, killing four and wounding three others in seemingly random attacks, was finally arrested after crashing a stolen car, police said early Thursday.

The hours-long rampage had police warning people across the city to shelter in place, locking down a baseball stadium and university campuses and suspending public bus services as frightened residents wondered where the man might strike next.

Ezekiel Kelly, 19, a violent felon who was released early from prison this year, was taken into custody at around 9 p.m. in the Memphis neighborhood of Whitehaven, police spokeswoman Karen Rudolph said. Memphis Police Director Cerelyn “CJ” Davis said during a news conference early Thursday that four people were killed and three others were wounded in seven shootings and at least two carjackings.

The first killing was at 12:56 a.m. Wednesday, and officers responded to three more crime scenes before receiving a tip at 6:12 p.m. that the suspect was livestreaming himself threatening to cause harm to citizens, Davis said.

Police then sent out an alert warning people to be on the lookout for an armed and dangerous man responsible for multiple shootings and reportedly recording his actions on Facebook.

Three more shootings and two carjackings followed. Police said he killed a woman in Memphis as he took her grey Toyota SUV, which he left behind when he stole a man’s Dodge Challenger across the state line in Southaven, Mississippi.

Kelly was arrested without incident two hours after the initial police alert when he crashed the Challenger during a high speed chase, and two guns were found in the vehicle, Davis said.

As the shooter terrorized the city, buses stopped running and the Memphis Redbirds cleared the field during their minor-league baseball game. Friends and relatives frantically called and texted each other and TV stations cut into regular coverage with updates.

Police received “numerous tips” from the public during the ordeal, Davis said.

The University of Memphis sent a message to students saying a shooting had been reported near the campus. Rhodes College, which is about 4 miles away from the university, advised students on and off campus to shelter in place.

The area where Kelly was arrested was about 11 miles from the University of Memphis and about 12 miles from Rhodes College.

“If you do not have to be out, stay indoors until this is resolved,” Memphis police said on Twitter, before the arrest.

Police did not discuss a motive or release the identities of those who were killed or wounded. It was too early in the investigation to discuss how the suspect got the gun or guns used in the shootings, said Ali Roberts, acting assistant special agent in charge for the Bureau of Alcohol, Tobacco, Firearms and Explosives in Memphis.

In February 2020, Kelly, then 17, was charged as an adult with attempted first-degree murder, aggravated assault, using a firearm to commit a dangerous felony and reckless endangerment with a deadly weapon, court records show.

Records show he pleaded guilty to aggravated assault and was sentenced in April 2021 to three years. Kelly was released from prison in March, 11 months after he was sentenced, Memphis Mayor Jim Strickland said.

“This is unacceptable. We should not be terrorized.” – Memphis Mayor Jim Strickland talking about the suspect getting out of jail 11 months into a 3 year sentence for a 1st degree murder charge pleaded down to agg assault pic.twitter.com/ipdsDD5Ti5

“This is no way for us to live and it is not acceptable,” the mayor said. “If Mr. Kelly served his full three-year sentence, he would still be in prison today and four of our fellow citizens would still be alive.”

And even before the bodies were cold, Michael Bloomberg’s bought-and-paid-for sock puppet kicked off the race for the quickest and most intellectually dishonest anti-gun take with this tweet . . . Did you catch that? In the hoplophobic harridan’s twisted world view, constitutional carry resulted in a convicted felon illegally obtaining a gun and murdering innocent people.

Watts knows full-well that constitutional carry — which only applies to law-abiding citizens — has nothing whatsoever to do with criminals like Kelly, who are prohibited persons, getting and using firearms. But she’s more than cynical enough to count on the average suburban wine mom not picking up on the false conflation here and getting on board the Bloomberg do something train.

As Watts makes perfectly clear, the Civilian Disarmament Industrial Complex is not above using gang-related and other crimes like what happened in Memphis to further their efforts at disarming legal firearm owners. If they get their way, of course, more law-abiding types will be easier pickins for violent predators Ezekiel Kelly.

That, however, is beside the point. Watts and the rest think society needs fewer guns. If that means fewer legal gun owners and results in more dead citizens, well, you have to break a few law-abiding eggs to make a gun-free omelet. As Watts and her gang of anti-gun droogs see it, the fewer law-abiding citizens with guns — whatever the cost — the better.

And so it goes.

“Salt is good: but if the salt have lost his saltness…”