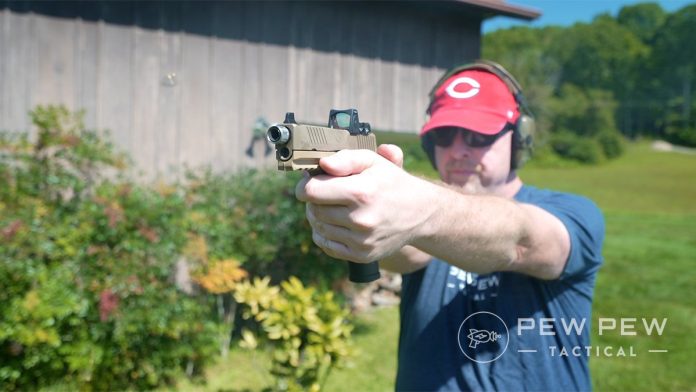 Want a full-size 9mm loaded with features, ready to go right out of the box?

Well, look no further than the FN 509 Tactical…

This striker-fired 9mm lives within FN’s 509 series, but with other options on the table, why should you choose the Tactical?

I’m going to tell you all about the FN 509 Tactical – lay out the pros and cons, get it out to the range. By the end, you’ll be able to decide if this peanut butter colored machine is right for you.

Spoiler alert. I love it. (Also, you lefties are in for a treat today…)

FN 509 Tactical Review at a Glance

This striker-fired 9mm is a great bedside or home defense gun that works whether you’re a righty or a lefty.

In 2017, when the U.S. Army was phasing out the Beretta, everyone and their brother competed to win the Modular Handgun System contract.

Of course, that contract went to Sig Sauer, but that didn’t stop other manufacturers from releasing their entries – including FN.

The 509 Tactical was FN’s submission for the MHS, but now it’s available in the civilian world for normal, everyday gun owners.

FN has a myriad of 509 models, but the Tactical means it has all the bells and whistles.

The 509 Tactical is a striker-fired pistol that’s best for those looking for a full-sized pistol with some elevated features. It also works great for left-handed shooters as its controls are ambidextrous.

If you need a bedside gun, I highly recommend the 509 Tactical.

This is not a small gun by any means. Being a full-sized, duty pistol means it’s large and not something you probably want to conceal appendix style. But that’s not really what it was designed for.

All the controls feel familiar, and this gun just makes sense in your hand. That FN grip feels good. Of course, you can change the backstraps, but whichever you choose, it will feel good in your hands.

But you lefties have already spotted something, haven’t you? The 509 series is completely ambidextrous right out of the box.

Nothing has to be swapped over – it’s ready to go.

That may not seem like a big deal to righties, but the lefties in the crowd can attest that this is a BIG deal.

Very few guns on the market are truly ambi. Not bad, FN, not bad…lefties are people too.

As far as aesthetics, I think it looks solid. I got FDE, but it’s available in black, of course. There’s some branding on the grip and slide, but nothing obnoxious.

Overall, it’s not a bad-looking gun.

How Does the FN 509 Tactical Shoot?

Before we start, I think it’s worth mentioning that this is my personal gun that I bought with my own money.

For this test, I got all the mags together. Loaded them with Remington UMC and let ‘er rip.

I was immediately struck with the trigger. It, of course, feels pretty stout. But it’s a duty gun, so that’s to be expected. That said, the reset is shallow, and on day one, I was able to get it running great.

Not sure how to explain it in words, but the trigger is really good for a service weapon.

As far as how it ran…well, it ran awesome for me — zero issues, like, for real zero.

Keep in mind I was using factory mags, and I didn’t run it suppressed or in weird weather, just summertime in Tennessee. But boy, oh boy, it kept up with me and ran without failure.

It feeds and ejects without issues and locks back on empty every time.

I love the reliability. I have two FNs now, and they run like Belgian Sewing Machines.

Accuracy-wise, it stayed on target with no stray shots. It hit where I wanted it to without complaints.

The Trijicon 3-Dot Night Sights offer more than standard sights when sticking with traditional iron sights – even when shooting suppressed.

These sights are suppressor height, so you can still see your target even with a can.

But again, you don’t have to stay with regular, ole sights. The Tactical model means you get what you need to mount up a red dot. I added a Trijicon RMR to mine, and I really like the combo.

The only trouble I had was that I nicked my hand pretty badly on the range. Was that the gun’s fault? Nah.

Truth be told, I was sloppy with my grip, which is totally on me. However, those of you with big mitts, be aware.

Its ability to be range ready and lefty-ready out of the box is a huge win for the FN 509 Tactical.

Want to mount an optic? You can do that. Need a light? It’s ready for one of those too.

Not to mention, the ability to upgrade mags from 17-rounders to 24 makes range reloads so much easier.

This thing didn’t quit on me a single time. It just kept pinging targets.

It feels great in the hand, and the fact that it supports left-handed shooters is a bonus.

It pings targets exactly where you want. No issues here.

You can throw on a red dot, suppressor, or light, and those 24-round mags are great. That said, it doesn’t have the full suite of aftermarket as Glock (but really, who does).

Upgrades for the FN 509 Tactical

The FN 509 Tactical offers a few upgrades you can throw on.

First, I recommend a good red dot. I used the Trijicon RMR, but we have a whole list of red dots we recommend over in our Red Dot Guide.

Next, I suggest grabbing a light to get the whole tactical aesthetic. Again, we have some recommendations in our Best Pistol Lights Guide.

Finally, throw on a suppressor. Trust me; it makes shooting way easier on the ears. Again, you can see what we like in our Best 9mm Suppressors article.

Overall, I am happy with my FN 509 Tactical. The folks at FN bring you a fantastic 9mm handgun with a great trigger in an optics-compatible, suppressor-ready platform.

What more could you want? So, from me, this gun gets two big thumbs up.

What do you think of the FN 509 Tactical? Let us know below. I found my go-to bedside gun…have you? Check out the Best Beginner & Home Defense Pistols.

How To Pickle Watermelon Rind The Amish Way