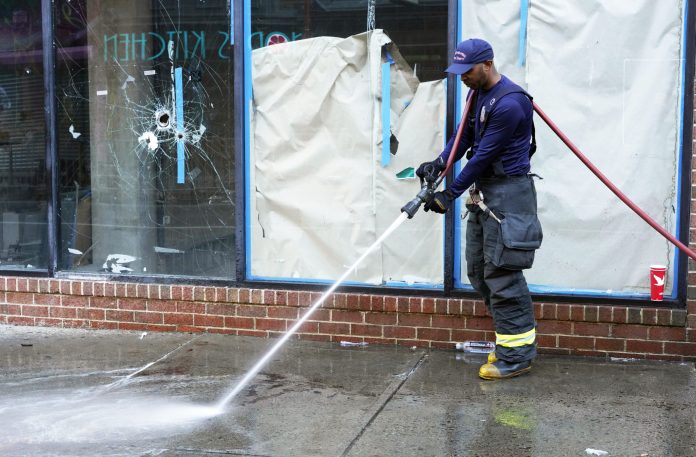 The Philadelphia Center for Gun Violence Reporting announced it will host a workshop in September with local television news journalists, along with “experts from impacted communities, researchers, educators and other thought leaders,” to explore if news reporting can help solve the out-of-control crime problem in the City of Brotherly Love.

News media should be at the table with The Philadelphia Center for Gun Violence Reporting. The question they should be asking is why are elected politicians failing to enforce laws and locking up criminals preying on the innocent.

Crime is out of control in Philadelphia. No one can argue that. The debate is over how to solve it.

Mayor Jim Kenney and District Attorney Larry Krasner have proven they are inept or unwilling to solve the crisis. They would rather target lawful gun owners and the firearm industry instead of prosecuting criminals and locking them up. Apparently, it’s easier to scapegoat than to actually do something to help the neighborhoods that are being victimized by criminals.

The Philadelphia Center for Gun Violence Reporting is a convenient tool to do this. They’re funded, in part, by the Philadelphia Office of Violence Prevention. That’s taxpayer dollars at work to push a political antigun narrative.

The Philadelphia Center for Gun Violence Reporting focuses on partnering “credible messengers” with media to tell their stories. Victims of criminal violence deserve to be heard. They also deserve to hear what their elected officials are going to do to solve the crime crisis.

Philadelphia, it seems, is doing little aside from blaming the firearm industry. The Philadelphia Center for Gun Violence Reporting’s data shows there is no progress. Philadelphia recorded 47 shooting victims last week and 56 in the previous week. There were 1,648 shooting victims this year, up four percent over 2021, and 373 homicides this year so far, a three percent increase over last year and up 77 percent from five years ago.

Mayor Kenney’s answer to this abysmal failure was to tell his city, “I’m waiting for something bad to happen all the time. So I’ll be happy when I’m not here, when I’m not mayor, and I can enjoy some stuff.” Mayor Kenney made those callous remarks after two Philadelphia police officers were shot on the Fourth of July.

He’s made no bones about his disdain for the Second Amendment. At the same press conference, he ripped lawful gun ownership, implying that the United States should follow Canada’s gun control example.

“I was in Canada two weeks ago and never thought about a gun,” he said. “The only people I knew who had guns in Canada were police officers.”

Krasner won reelection in 2021 with the help of a $259,000 contribution from Soros. That bought Philadelphia the notorious distinction of being named among the 10 cities with the highest murder rates.

“I was very disappointed there wasn’t one mention of starting to refocus and strategically target persons that are carrying guns illegally, especially previously convicted felons and persons on probation or parole, as that should be the backbone of any anti-violence program in Philadelphia,” said Joe Sullivan, the former deputy commissioner of patrol at the Philadelphia Police Department, to Fox New Digital. “But since he’s taken office, we’ve seen a significant reduction in prosecutions in general and for persons carrying guns illegally. I think that’s counterproductive for a time when the city of Philadelphia is setting records for gun-related homicides and shootings.”

DA Krasner knows, or should know, that criminals aren’t buying their firearms at retail after passing an FBI National Instant Criminal Background Check System verification. They’re getting them through theft or the black market. The Department of Justice’s Bureau of Justice Statistics consistently shows this.

The firearm industry is willing to step in even when local officials aren’t. NSSF co-created and funds the Don’t Lie for the Other Guy campaign to remind the public that attempting a straw purchase is a federal crime, now punishable by up to 15 years and a $250,000 fine. That’s a partner program with the Department of Justice (DOJ) and Bureau of Alcohol, Tobacco, Firearms and Explosives (ATF).

Even that was criticized by city officials. Max Weisman, the communications director for City Councilmember Isaiah Thomas, tried to call it subtle advertising for gun sales.

The posters depict a convicted individual in an orange jumpsuit, a stark reminder that straw purchases are illegal. NSSF is undeterred by hecklers that shout from the sidelines instead of doing the hard work it takes to reduce crime. The firearm industry takes this seriously and criminal misuse of firearms is something we’ve been proud to combat with law enforcement for over 20 years.

Philadelphians are suffering from elected officials unwilling to do their jobs and lock up criminals. Victims deserve to be heard. Teaming them together with agenda-driven news outlets to push a gun control narrative doesn’t stop crime. The Philadelphia Center for Gun Violence Reporting is another example of appearing to do something when nothing is actually getting done. The question the media should be asking is when will Philadelphia start locking up criminals?

Joe Bartozzi is the President and CEO of the National Shooting Sports Foundation.

“There’s no samurai code or fair play in battle!”