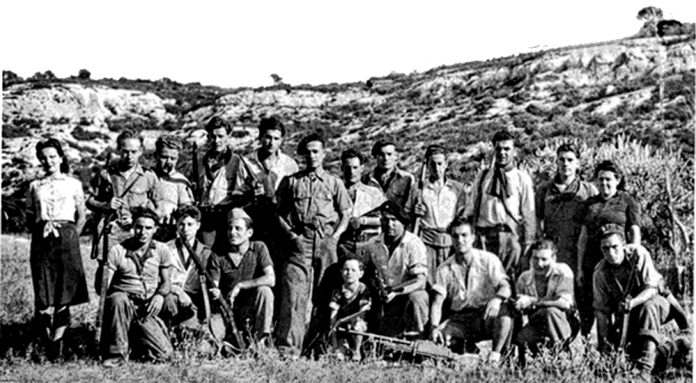 As the German armies rolled into Paris, all seemed without hope. Their homes had been taken, and they were no longer free people.

Men were regularly rounded up and sent back to Germany to work in the factories producing desperately needed goods for Hitler’s men…but some Frenchmen said “no.”

Known as the Maquis, these were the rural version of The French Resistance.

They quickly organized, fighting against the Germans at every turn, using sabotage and ambush to accomplish their goals before quickly fading into the night.

But it is hard to fight without weapons and ammunition, and the few arms that the Maquis did possess were rapidly dwindling.

The people needed help, and that help was about to arrive. Operation Cadillac was underway.

On July 14, 1944, the Maquis received notification that a massive arms shipment was imminent, slated to arrive atop Mont-Gargan.

They heard the engines in the sky overhead, and as the people looked up, they saw a sky filled with parachutes of red, white, and blue.

Machine guns, Stens, grenades, mortars, ammo, money, medicine, and food — that was how they would fight back and maintain freedom.

But time was of the essence.

The Germans were furious about Operation Cadillac. The Maquis had proven to be a thorn in their side for far too long, and they intended to stamp them out completely from the region.

Fortunately, the Maquis knew the Germans were coming. And so, they rapidly retrieved the packages, hid what they didn’t immediately need, and then waited.

Mont-Gargan was saturated with the Maquis. Two days later, the Germans arrived.

The Maquis knew what lay ahead of them. If they surrendered, like other members of the French Resistance before them, they would be tortured and executed.

Reprisals against their loved ones would likely take place as well. Not fighting wasn’t an option.

As the Nazis arrived, fierce fighting broke out throughout the entire region of Mont-Gargan. According to one Maquis fighter, “We didn’t eat or drink for three days, because we had to fight.”

Though the Maquis fought valiantly, the Nazis overtook the mountain.

A total of 38 of the Maquis were killed in the action, 54 were injured, and five were missing.

But the casualties inflicted upon the Germans were three times that of their own.

The Maquis made Hitler’s men pay dearly for that piece of French soil. A month later, the Maquis surrounded the Nazi-held French city of Limoges.

Realizing they were surrounded, the Nazis laid down their arms and surrendered.

And the Maquis entered the city to the cheering roar of their people.

How To Make Long-Lasting Tallow For Survival