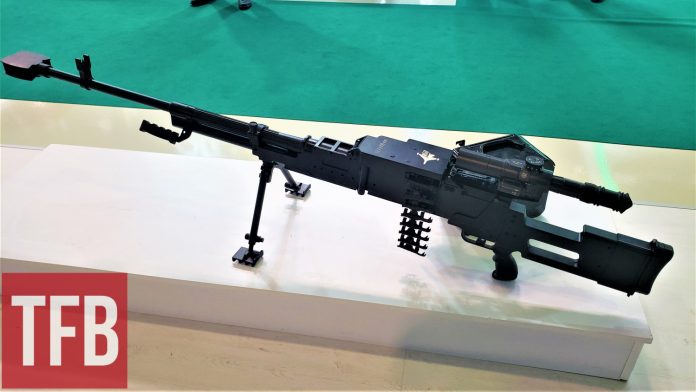 In Part 1, we looked at some of the Azerbaijani-made small arms showcased at the ADEX 2022 exhibition in Baku. In Part 2, we’ll look at more unique and lesser known products of the Azerbaijan defense industry – large caliber sniper rifles and machine guns.

Generally, military small arms in Azerbaijan are developed and produced by a company named “IGLIM”. Before starting in the firearms industry, IGLIM specialized in aircraft engineering. The most significant new product “IGLIM” brought to the ADEX expo was their new 12.7×108 caliber machine gun, which, according to the representative, didn’t get a name yet. The machinegun is apparently based on the Soviet NSV heavy machinegun which is currently produced in Kazakhstan and also looks similar to the Russian “Kord” MG developed to replace NSV.

Azerbaijan’s booth at the ADEX exhibition also featured a wide array of anti-materiel rifles. The first one, IST 12.7 was chambered for the same 12.7×108 round as the new heavy machine gun. This round is basically a Soviet version of the .50 BMG. The next one, NST 14.5 is chambered for 14.5×114, a lesser known Russian round that is used in KPVT heavy machinegun mounted on various armored personnel carriers. And then there is “one rifle to rule them all” called IST-23. Previously, TFB’s Miles reported about the prototypes of this rifle, and the final version certainly looks more elegant compared to the prototypes.

The round, 23×115, was initially developed in the 1940s for automatic aircraft cannons and was never used in small arms before. While the utility of this rifle can be questioned, the actual idea is certainly unconventional and interesting. While it is hard to come to any conclusion without testing all the above-mentioned rifles, it is evident that Azerbaijan spares no expense when it comes to building its military industry and eventually can become an important player in the international arms market.

Vladimir Onokoy is a small arms subject matter expert and firearms instructor. Over the years he worked in 15 different countries as a security contractor, armorer, firearms industry sales representative, product manager, and consultant.