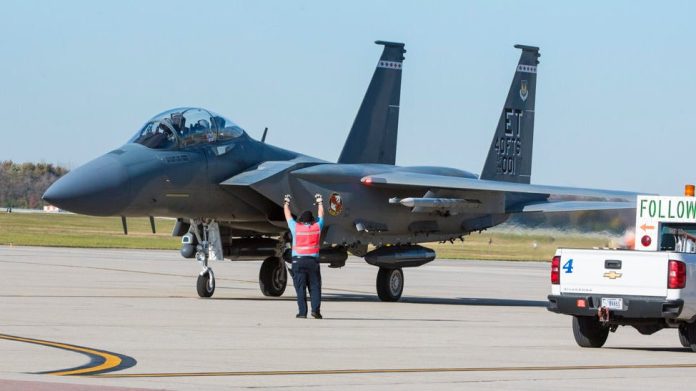 During a roundtable with reporters Wednesday at the Air and Space Forces Association’s Air Space and Cyber conference, ANG commander Lt. Gen. Michael Loh repeatedly raised concerns about the Guard’s aging inventory of F-15C/Ds, saying that all need to be replaced by the Boeing F-15EX or Lockheed Martin F-35A.

When asked specifically whether he believed the F-15EX buy was currently too low and whether he would advocate for it to be increased, Loh smiled and gave a thumbs up.

“Some people are still looking at this as a 1970s-technology aircraft. It is not,” he said, pointing to the F-15EX’s advanced capabilities, including open mission system architecture, Eagle Passive Active Warning Survivability System electronic warfare suite and the AN/APG-82 radar.

However, he expressed his belief that more jets could be added to the program of record in the short term,  as the Air Force begins to field the aircraft and see its performance.

“We have not done a great job of saying, ‘Hey, here’s how this fits in better, let’s say, than an F-15E,” he said. “And that will be our challenge over the next couple of years. That will then drive different conversations.”

Currently, the Air Force plans to buy 24 F-15EX aircraft in FY23 and wrap up procurement in FY24 with a final 24-jet buy. But Congress could intercede — as it did over the last decade, when lawmakers continually forced the Navy to buy additional F/A-18E/F Super Hornets at a time the service planned to curtail Super Hornet production.

Loh’s support for the F-15EX could find eager support on Capitol Hill, specifically for lawmakers who represent St. Louis, Mo., where the F-15 is produced.

With a total of 80 F-15EXs, the Air Force would be able to replace the F-15C/Ds for about three existing squadrons — active or Guard — leaving five legacy F-15C/D squadrons without EX models to replace them. It’s possible the Air Force could transition those squadrons to the F-35 instead, though Loh noted that to do so, the Air Force should prioritize increasing F-35 procurement to 72 aircraft per year.

Portland Air National Guard Base in Oregon is set to be the first operational base to receive the F-15EX in 2023. Three bases where the Guard operates the F-15C/D — Barnes Airport in Massachusetts, Fresno Yosemite Airport in California, and Naval Air Station Joint Reserve Base New Orleans in Louisiana — are still waiting to hear whether pilots will transition to the F-15EX or F-35, as is Kadena Air Base in Japan, which is home to two active-duty F-15C/D squadrons.