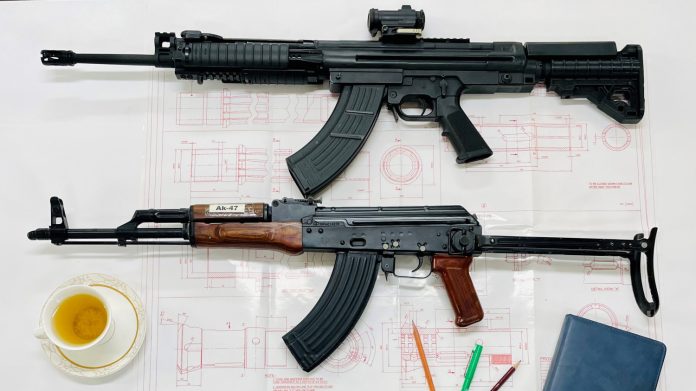 In December of 2021, TFB was the first firearms media to publish information about BW20, a new family of roller-delayed blowback rifles developed by Pakistan Ordnance Factories. In February of 2022, the entire family of weapons was officially presented in Saudi Arabia at the World Defense Show exhibition. Now, there is a new member in this family – CW39, which stands for “combat weapon chambered for 7.62×39”. Let’s start with a little bit of history. In recent years, the Pakistan Army and Law Enforcement units were armed with two completely different weapon systems – a domestically produced G3 rifle and a Type 56 Chinese AK rifle. While G3 was a standard issue weapon for the military, AK remained to be used as a “CQB weapon”, popular with Law Enforcement paramilitary units.

In 2016, the Pakistan army started the largest weapon trials program in recent history, testing various weapon systems both in 7.62×51 and 7.62×39 calibers to replace both G3 and Chinese AK. After the trials were complete, there was one surprising outcome – G3 proved itself to be quite competitive compared to newer designs.

Based on that fact, POF developed a new family of weapons that use the proven delayed blowback action and can be manufactured with the use of equipment previously utilized to make the G3 rifles. While BW20 can potentially replace G3, CW39 can potentially replace Type 56 and other AKs, making Pakistan less dependent on weapon imports. CW39 uses standard AK magazines. The weight of the prototype is 3.9 kg, but the production version should weigh between 3.6-3.7 kg. It is slightly more than a stock AKM but much less compared to modern accessorized AKs fitted with upgrades such as adjustable stocks and rails.

In the video below, Salman Ali, a POF officer who initiated the development of BW20 and is the primary designer of the project is testing his new prototype.

Production of the new rifle is scheduled for the beginning of the next year. It is hard to predict the destiny of any new weapons system, but one thing is certain – the legacy of G3 and roller delayed blowback action is alive and well and perhaps it will again find its place under the sun in the coming years.

Vladimir Onokoy is a small arms subject matter expert and firearms instructor. Over the years he worked in 15 different countries as a security contractor, armorer, firearms industry sales representative, product manager, and consultant.

It’s Time for a FREE Hunt