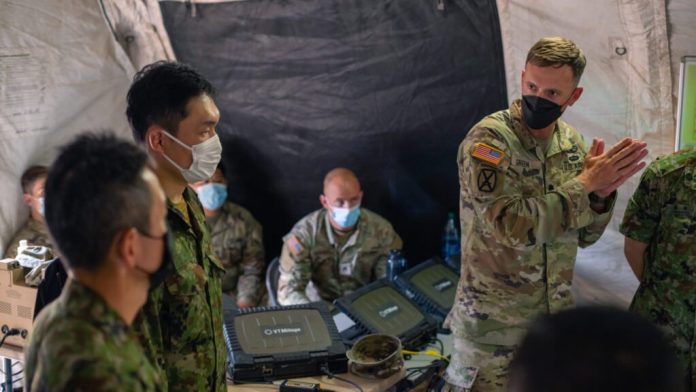 U.S. Army Multi-Doman Task Force (MDTF) and the Japan Ground Self Defense Force (JGSDF) rehearse the sequence of events for the sink exercise for Rim of the Pacific (RIMPAC) 2022 at the Pacific Range Missile Facility. (DVIDS)

WASHINGTON —The US Army is formally activating its third Multi-Domain Task Force today as the service looks to provide the joint force with more battlefield options across the vast distances of the Indo-Pacific.

The Army Multi-Domain Task Forces are new, theater-specific units that employ long-range precision effects, including cyber, electronic warfare or long-range fires. The MDTFs are cornerstone to the Army’s belief that in any future fight against China or Russia, the Army will have to confront its opponent in multiple domains, including air, space, sea and cyber, in addition to land.

The units, whose tactical focus is taking out enemy anti-access/area denial systems on the battlefield, are equipped with air defense, intelligence and strategic fires capabilities, in addition to a new high-tech battalion called the Intelligence, Information, Cyber, Electronic Warfare and Space Battalion (I2CEWS), which will provide long-range sensing or non-kinetic attack capabilities. The new task force, based in Hawaii, is second Pacific-focused MDTF.

“The MDTF brings specific capabilities that can operate in a distributed manner across island chains and over long distances,” Lt. Gen. James Jarrard, deputy commanding general of US Army Pacific, told reporters during a roundtable Thursday. “We cannot have too much capacity in those capabilities. I think it is a clear statement by the Army that they understand that this is the priority theater.”

The MDTF has “the opportunity to work with advanced and emerging technology and equipment,” Zinn said. “We have soldiers with technical expertise in building an operating networks and soldiers with training to employ our advanced systems.”

The Army now has three multi-domain task forces, one in Europe and another Pacific-based formation based out of Joint Base Lewis-McChord. The service has plans for two more MDTFs, one expected to be Arctic-focused and the other globally responsive.

Jarrard said that the third MDTF wouldn’t be structurally different than its two predecessors. However, Zinn said that the third task force would build up its formation faster based on lessons learned from the first MDTF, including how to assemble a team, how to begin operations and start participating in exercises.

“We should be able to perform the the organization much quicker with the third and get it to FOC [full operational capability] much quicker than we were with the first and second (MDTF),” Jarrard said.

Jarrard said that the goal for the new MDTF to reach full operational capability in fiscal 2023. After today’s activation, Zinn will start with an initial build and add additional capabilities over time, but declined to go into specifics about timelines for receiving capabilities. While Zinn wouldn’t get into specifics, the MDTFs are supposed to receive the Army’s Long-Range Hypersonic Weapon and ship sinking Mid-Range Capability once the service starts fielding the new missiles, expected to be next year.

“We’re designed to begin operations before receiving all of our personnel or all of our equipment,” Zinn said.

He added that the MDTF is currently “evaluating opportunities” to participated in exercises and operations, and will start to take part “soon.”