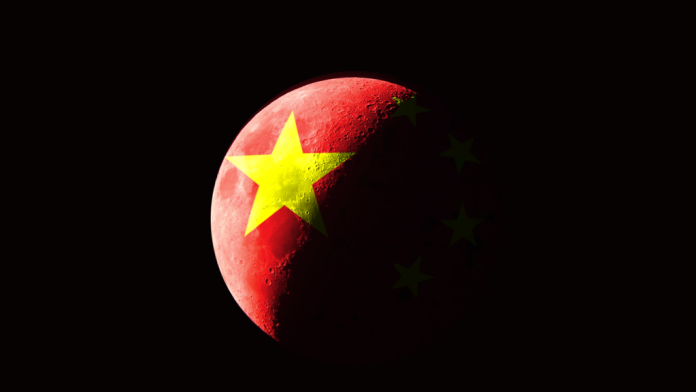 The moon once again a prize in a new space race. (Graphic by Breaking Defense / Original moon photo by Dom Le Roy from Pexels)

WASHINGTON — In order to stay ahead of China in the space domain, the US needs to increase investment in its infrastructure and develop stronger relationships with allies and partners, according to an official from the Pentagon’s Defense Innovation Unit.

Steven Butow, DIU’s Space Portfolio director, said increasing investment in “both physical and digital infrastructure” and having strong ties to its allies will help in “building the space economy” of the US and in times of war. It’ll also require bringing in all the different space-related efforts from agencies under one effort.

“So it’s going to be really important that we bring things together,” Butow told a Defense One “State of the Space Force” event on Tuesday. “There should be one space effort, not 17, you know, the weather guys do one thing, NASA does another, DoD does another.”

Butow’s comments come after an August report [PDF] spearheaded in part by DIU with the Space Force, Air Force and Air Force Research Laboratory that said China was on track to outpace the US as the leading space power by 2045. The report, fourth in a series stemming from an annual workshop of more than 350 industry and government participants, promoted a “North Star” vision for the US that focuses on economic development and human settlement in space.

“In order to compete and retain its leadership role, the U.S. must clearly articulate a North Star vision for space that transcends administrations, and aggressively pursue a whole-of-nation action plan to achieve it,” according to the report. “Both the vision and plan must integrate and synchronize efforts across civil, commercial and national security space and leverage both the disruptive innovation that is rapidly maturing within the new space economy domestically and abroad.”

Butow, one of the authors of the report, said during the Defense One event that the North Star vision requires more than just investing in space companies: The US needs to reinvigorate its STEM education and make sure it has a resilient supply chain, which the report says is an under-invested area. (According to the report, STEM graduates in China are projected to outnumber those in the US by 15 to 1 by 2030.)

“Despite the impressive growth in the sector, U.S. supply chains have failed to match the growing demand of a burgeoning commercial space industrial base, driving further dependencies on foreign sources for critical parts and components,” according to the report. “Logistics challenges of 2021 translated into longer lead times for critical parts and significantly increased cost for parts.”

Butow said that China has yet to miss a beat in its plans to become the dominant space power and is counting on displacing the US as a world economic leader.

“So really with the report if there was a subtext to it, or subtitle, it’d be, you know, ‘What the heck is China up to?’” he said. “Because China has a grand strategy for space that covers many decades and they update it every five years and they want nothing less to be the dominant space power by 2045. And they have a plan to achieve that economically, scientifically and militarily.”

Do Not Comply – No Matter What, by SaraSue. It’s going to boil down to: did I listen to God’s voice.