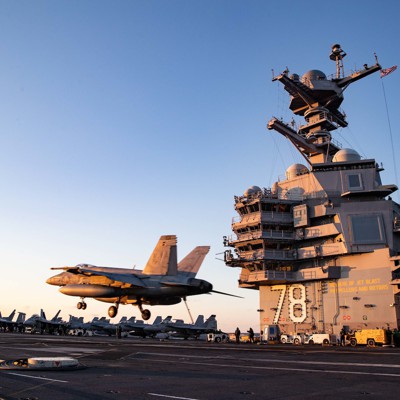 The first official deployment of the USS Gerald R. Ford will be something of a short test run: a set of exercises with allies in the Atlantic, the 2nd Fleet commander said this week.

This “service-retained deployment” will start next week and last for an undisclosed amount of time, Vice Adm. Daniel Dwyer told reporters Monday in remarks that the Navy asked to embargo until Thursday. The 5-year-old aircraft carrier is to make its first “global deployment” in 2023.

Other first-in-class carriers such as the Nimitz and Enterprise (CVN 65) have done similar initial deployments, Dwyer said. The Ford will remain under 2nd Fleet control and will not chop to a combatant commander, he said.

The Navy is “taking a similar approach with the available opportunity that Ford has in her schedule to deploy her in a service-retained fashion to work with allies and partners to continue to better understand how the Gerald R. Ford-class aircraft carrier can operate not only with U.S. naval forces but with our allies and partners,” he said.

This will be the first time the ship has worked alongside allied ships, said Capt. Paul Lanzilotta, the Ford’s commander.

Laid down in 2009, launched in 2013, and commissioned in 2017 at a cost of $13 billion, the Ford has been delayed by development problems related to several of its new technologies, including its aircraft launch and arresting gear systems and 11 weapons elevators.

Bryan Clark, a senior fellow at the Hudson Institute, said the Navy usually calls these types of deployments “training events” because they are operating for a naval purpose and not for a combatant commander mission. This one will allow the Navy to work out operational concepts and procedures for the Ford and its new equipment.

“So there’s all these new capabilities on the Ford and all they’ve done thus far is just test them to make sure they work in accordance with their design specifications,” Clark said. “And they’ve never really gotten the chance to go out and experiment with it and see how they want to use it, and what the maybe-more-effective ways to use it are.”

Most of the air wing will be aboard for the deployment, including aircraft from all squadrons, Dwyer said.

The Ford will join 17 ships and a submarine from the U.S. and eight other nations: Canada, Denmark, Finland, France, Germany, the Netherlands, Spain, and Sweden. Dwyer would not give a specific duration for the deployment, but said the Ford would sail into the north Atlantic and the U.S. Naval Forces Europe-Africa area. Lanzilotta said the ship would make a foreign port call, but declined to say where.

All this is part of a “stepping-stone approach” ahead of Ford’s global deployment next year, and an opportunity to find areas they can improve, Lazilotta said.

Clark said it’s good that Ford is getting the chance to exercise and try out the ship before its global cruise.

“The ship is certified for deployment, and so this is a perfect time to step back and do this kind of concept development that the Navy needs to do before they send it out there on an operational deployment,” he said.