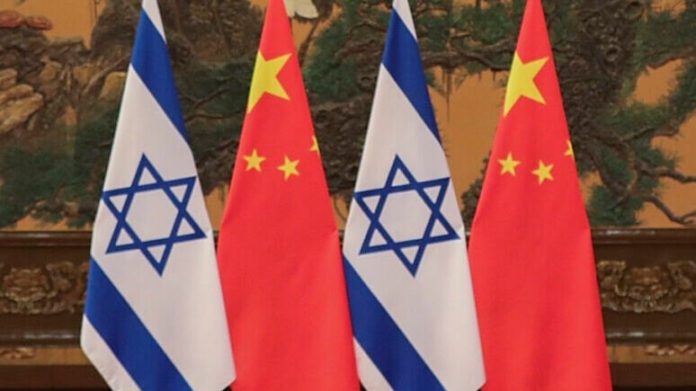 Chinese and Israeli flags hang together at a 2017 event. (Photo by Lintao Zhang/Pool/Getty Images)

The move comes as Israel is moving to create stronger bonds with Chinese research institutes, including an agreement launched last year specifically “to attract excellent Chinese students” to come study in Israel.

Soft pressure began over the summer, when President Joe Biden visited Israel, but has intensified recently to what one Ministry of Defense source described as a “request that cannot be rejected.” The goal from DC, the Israeli sources said, is to minimize, or if possible cut altogether, cooperation between Israeli and Chinese research organizations.

Israeli officials were surprised by the focus from Washington, and are now engaged in a back and forth with the Biden administration on how to move forward, per the source. Those talks were likely part of a Sept. 28 meeting this week between the national security advisors for both countries, Jake Sullivan and Eyal Hulata, at the White House.

Israeli defense sources told Breaking Defense that the main source of concern for Washington are so-called “dual-use” technologies, the kind of systems that have commercial applications but can also be used in defense products. That includes the kind of tech found in research programs dealing with cyber, space, communications, and long-range observation systems, to name just a few. In some Israeli academic institutions, these research topics are offered to foreign students, including those from China.

A Ministry of Defense source told Breaking Defense that the Americans are especially concerned about the leakage of sensitive data about cyber capabilities, mini-satellites and electronic warfare systems.

Those concerns are amplified by the nature of Israel’s civil-military intermingling. Many of the students and scientists that are part of the academic sector in Israel also serve as reservists in some of the Israeli Defense Forces’ elite technical units, such as the SIGINT-focused Unit 8200. That those researchers could be working on R&D capabilities with Chinese students is driving alarm bells in DC, the sources say.

The pressure follows similar campaigns from Washington to try and limit, or outright sever, China’s influence in Israel. Last year, the Biden administration pressured Israel over espionage concerns related to a Chinese-built port in Haifa while the information provided by the US led to Israel cracking down on Chinese attempts to receive Israeli defense technology.

US officials are wary of what has been termed China’s “military-civil fusion” effort, where any technology developed for civil or commercial use inside China must also be shared with the military.

Beijing “is implementing this strategy, not just through its own research and development efforts, but also by acquiring and diverting the world’s cutting-edge technologies – including through theft – in order to achieve military dominance,” a US State Department factsheet [PDF] reads.

In a Sept. 20 analysis, researcher Casey Babb wrote on the INSS website that “relations between China and Israel have gradually deepened over the last two decades across a wide range of fields.”

“For decades, the CCP has prioritized the theft and access of sensitive information, technology, and knowledge from research communities around the world,” Babb wrote. “From opaque academic recruitment efforts, consenting research partnerships, large-scale investments into academic institutions, covert espionage operations, cyber intrusions, and other tactics, China has developed a wide-ranging toolkit of licit and illicit activities to support its tech transfer ambitions throughout international research communities.”

Helping spur the American pressure is a relatively new Israeli initiative to increase scientific collaboration with China. In an Oct. 2021 announcement, the Israeli embassy in Beijing released details about this initiative, stating “The government of Israel attaches great importance to the academic and scientific ties between China and Israel. Large budgets and funds have been already allocated to this important goal.”

In addition to support for undergraduate students, the announcement includes encouragement for Chinese doctoral students to come and spend three years, all expenses paid, doing research in Israel. And the two countries “agree to launch calls for proposals to support collaborative basic research projects between Chinese and Israeli scientists in the areas of Life Sciences and Medicine and Exact Sciences and Technology. These joint research projects are to be carried out by established research groups from both countries.” 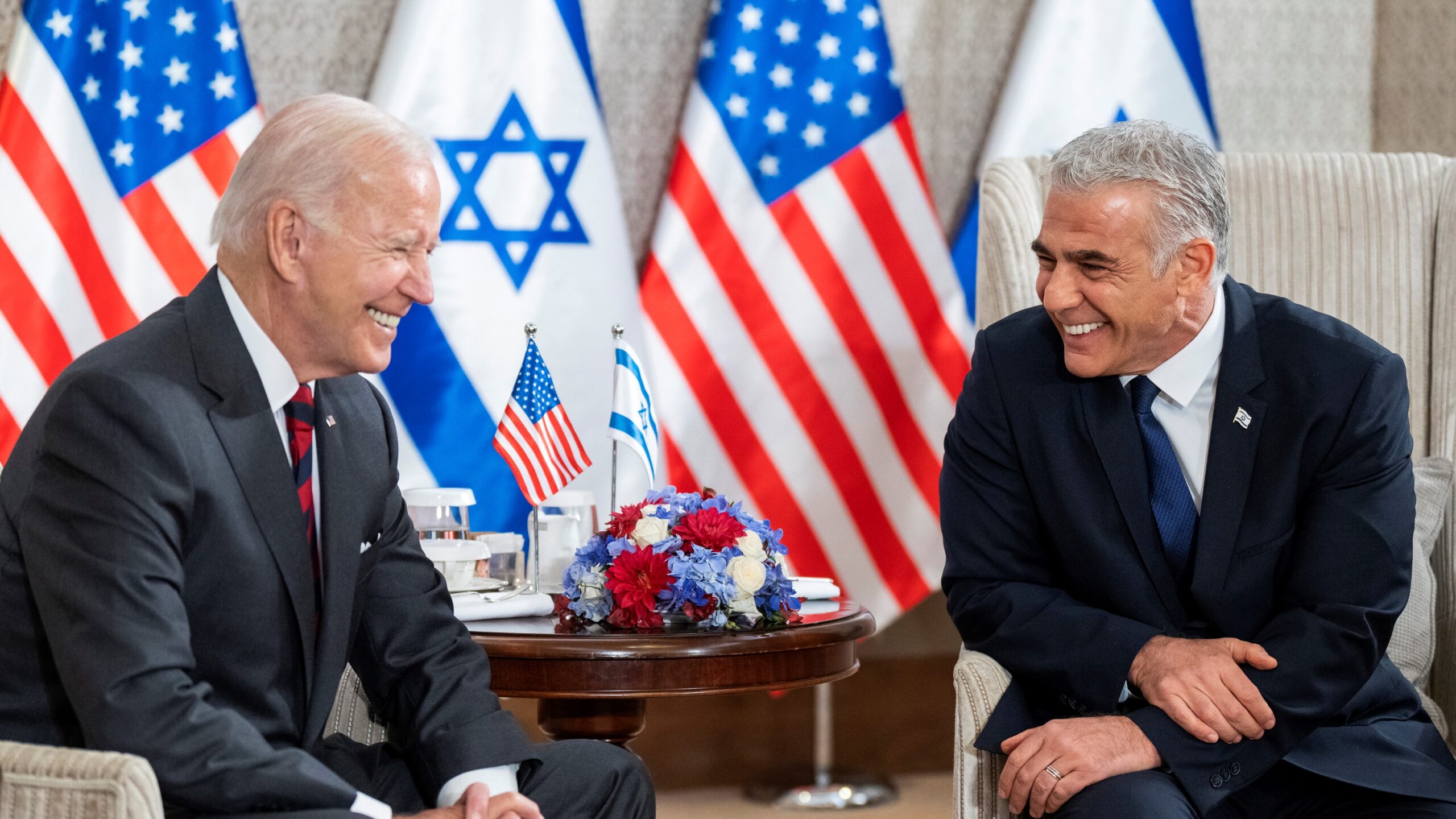 It appears that the new agreement with China largely flew under Washington’s radar until around the time of Biden’s July visit to Israel. In the lead up to that event, the White House issued a statement “launching the new Strategic High-Level Dialogue on Technology, tasked with establishing a U.S.-Israel technological partnership on critical and emerging technologies and solutions to global challenges: pandemic preparedness, climate change, implementation of artificial intelligence, and trusted technology ecosystems.”

Babb, in his analysis for INSS, called the announcement “a clear signal to China,” one which “underscore that Jerusalem is taking Washington’s concerns seriously.”

A White House readout of the the Sept 28 meeting between Sullivan and Hulata reads that the two “discussed the launch of the U.S.-Israel Strategic High-Level Dialogue on Technology that same day, a new vehicle announced by the President and Prime Minister Lapid in July in Israel to enhance technological collaboration to address pandemic preparedness and climate change, promote trustworthy artificial intelligence, and protect our technology ecosystems.”

Asked if China was specifically brought up during the meeting, a National Security Council spokesperson declined further comment beyond the readout.

Balancing Politics From Both Sides

Talking with sources and experts, there is no clear consensus on how Israel should respond to Washington. Balancing the interest of working with China with the political pressure from the US has been a longstanding challenge for Jerusalem, according to a senior defense industry source.

“Defining technologies as dual-use ones include almost every advanced technology,” the source noted. “The American demand calls for a very serious public debate because it will affect Israel in the long run.”

A former senior official in the Israeli defense establishment, speaking on background, added that DC needs to come at this issue with a greater understanding of the importance China plays for Israel economically.

“There must be a system that will evaluate specific cooperation projects, and not an across-the-board action,” the former official said.

Dany Yatom, former head of the Israeli Mossad, told Breaking Defense that Washington may be overplaying its concerns.

“I think that is some cases the Americans exaggerate,” Yatom said. “There must be a continuous dialogue with Washington about what can pose a threat to US security and what is innocent.”

But Gabi Siboni, an Israeli senior cyber expert and a reserve colonel in the IDF, told Breaking Defense that US concerns are understandable, as Israeli academic institutions invest in cyber research while some of the students and scientists have been trained by the Israeli defense forces while serving.

“That said, over the last few years, and partly in response to mounting US pressure on Israel to reconsider its relationship with China, there has been a noticeable cooling of economic activities between the two countries,” he noted.

The Technion, Israel’s top technical academy, has been cooperating with China for years. In 2013, the Technion partnered with Shantou University in the Guangdong province of China and the Li Kashing Foundation (a philanthropic fund registered in Canada) to establish the Guangdong Technion Israel Institute of Technology (GTIIT).

Asked by Breaking Defense about American concerns over research ties with China, a spokesperson said “The Technion perceives its involvement in GTIIT, from its inception to the present day, as limited to global subjects related to sustainability and the environment for the good of all humankind. In particular, it addresses the many challenges that China faces in water pollution, air pollution, soil pollution and food. Thus the educational programs that have been launched by the Technion in GTIIT have all focused on these subjects.”

EXCLUSIVE: US Strategic Space Review signed out, but no unclassified version is coming