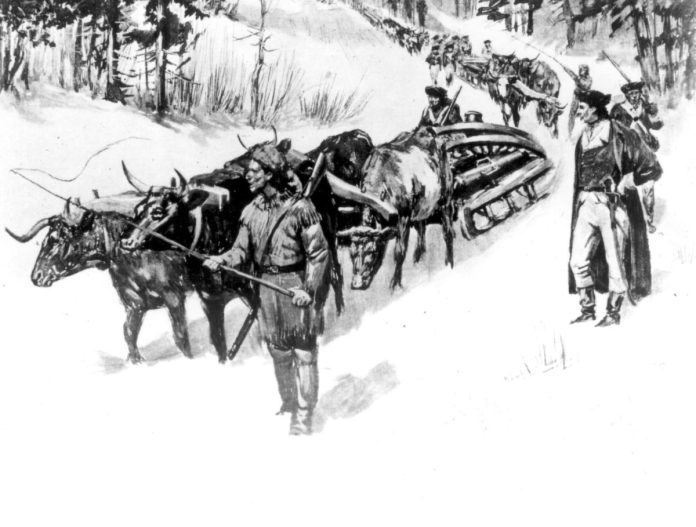 For months the British laid siege in Boston.

The supreme military force fought against a ragtag band of farmers, merchants, and trappers, and things looked grim.

Americans were running out of gunpowder, they had no artillery, and smallpox ravaged the men.

Fort Ticonderoga had recently been captured by Ethan Allen and later traitor Benedict Arnold. Several artillery pieces were present at the fort.

If these munitions could be transported to Boston, the Americans would have a fighting chance.

Transporting thousands of pounds of artillery pieces, mortars, and cannonballs over 300 miles through incredibly inhospitable terrain in the dead of winter wasn’t an easy task.

The American navy was non-existent, and any attempt to transport this weaponry by sea was bound to result in those pieces resting at the bottom of the Atlantic.

So, Americans had to get creative, and one man had a solution.

Henry Knox was a bookshop owner with no prior military experience.

Everything he knew about military theory he learned from pouring over old books – particularly Julius Ceasar’s Commentaries and Sharpe’s Military Guide.

He was the unlikeliest of candidates, and on paper, sending him to retrieve the artillery was laughable at best.

Yet he was chosen.

Knox arrived at Fort Ticonderoga on December 5, 1775, with his men. The weather was atrocious, but he had no choice – he had to succeed.

Loading 58 artillery pieces onto boats, Knox took the artillery down the ironically named Lake George. The wind was fierce and the weather cold, but he made it across.

Now came the hard part…they must travel overland with hundreds of miles to trek.

Knox loaded the cannons aboard oxen-towed sleds and set out.

After months of travel, Knox’s “Noble Train” arrived outside of Boston on March 17, 1776. Things looked dark within the city of Boston but hope arrived with Knox.

George Washington placed Knox’s artillery on Dorchester Heights – the key to taking Boston – and the impending threat of bombardment caused the British to realize that they could no longer hold the city.

The most powerful military in the world had just been pushed back.

Against impossible odds, a severely overweight, self-taught military theoretician and former bookseller just played an indispensable role in defeating a Goliath of a force.

11 Main Survival Blade Shapes (and their Pros and Cons)