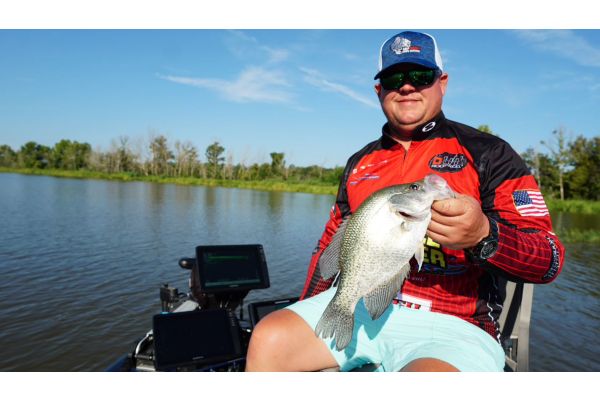 “Puts His Money Where His Mounts Are” in ’23 Season

Six years ago, professional crappie angler, Brandon Threadgill had never intentionally caught a crappie.  The Alabama pro had chased bass tournaments throughout the southeast for many years, but was looking to scratch the competitive itch in other venues with another species of fish.  He explains how he launched into the crappie scene, adding, “I started out fishing smaller local crappie events just to get my feet wet and immediately liked the more casual camaraderie among the guys.  I really love it now.”

His move to the crappie trails has been met with multiple high finishes, with a first place last year on the Crappie Masters national event held on Lousiana’s Lake D’Arbonne being one of the more notable.

One essential technology common to bass and crappie anglers alike has been the introduction of forward facing, live sonar.  The ability to see fish ahead of the boat in real time, along with the fishing lure, allows anglers of both species to target fish they couldn’t previously detect.  As Threadgill emphasizes, “Forward facing sonar has become so critical that an angler can rarely win or compete consistently in a tournament for bass or crappie without it.”

Like most bass and crappie anglers these days, Threadgill runs multiple sonar screens at both the bow and console of his fiberglass boat. His layout up front consists of two Garmin ECHOMAP™ Ultra 126sv units, which both have live forward sonar: one transducer is mounted to the trolling motor and the other is mounted on an independent shaft in order to have a fuller view around and in front of the boat.  Additionally, he mounts a 12” Humminbird Helix on the bow to run his mapping software.

At the dash, a 15” Humminbird Solix is used for side imaging and a 10” Humminbird Helix mounted off to the side of the Solix provides mapping from the driver’s seat.

Obviously, with this many sonar screens attached to the boat, efficient mounting of multiple screen configurations is critical.  Rose Metal Products (RMP), makers of the Trophy Graph Systems sonar mounts, has been an important sponsor for Threadgill’s crappie tournament exploits, and a key to effective placement of his electronics.  RMP’s tagline for their Trophy Graph System mounts is “Put your money where your mount is,” something Threadgill has taken to heart by sporting multiple RMP products across his 20’ Skeeter boat.

He details the many Trophy Graph System products found on his 20’ Skeeter, starting at the bow.  “Up front, I’m using the RMP Tall Dual Mount with the RMP Universal Gimbal Plate,” he explains.  Threadgill details that he prefers to sit when fishing for crappie and the height of the tall RMP bow mount provides the optimum view, adding, “The  RMP Tall Mount is the ideal height for me – it’s not in the way of my fishing but it’s tall enough to where I can see my screens easily.  RMP also has a new version of the tall mount that gets the screens at a better angle for those anglers that prefer to stand while fishing.”

Threadill notes that the RMP Trophy Graph Mounts at the bow require no height adjustment throughout the day, providing more efficient use of his time, stating, “The adjustable bow brackets that are on the market today require significant height adjustments to give visual clearance when running down the lake (from the console), but I feel like I get an extra 2-3 more casts every stop I make because my graphs are already set and in place.  I don’t have to move them to get them adjusted to my line of sight.  When I move to the front deck, I just start fishing.”

At the console, the crappie pro relies on a further assortment of RMP mounts, as he details, “I use the RMP Universal Dash Mount that works well with any boat with an aluminum dash plate.  This mounting bracket is very adaptable to fit anywhere on that dash plate; in fact, my boat dealer uses these a lot due to their versatility.  I also had RMP make me a special universal plate to accommodate my 10” graph, which is offset to the side of the boat’s console, but turned in so I can see it from the driver’s seat.  RMP will build custom mounts for those anglers with special mounting needs.”

As Threadgill concludes, “The biggest thing I like about RMP’s Trophy Graph System mounts is they’re very solid, but also very simple.  There are no moving parts that might vibrate loose, the brackets are all easily adaptable to fit your desired electronics configuration.  In summary, they’re simple yet tough.”

For the complete lineup of RMP’s Trophy Graph System mounts, visit their website at www.trophygraphsystems.com

8 Tips for Prepping in Suburbia and the City