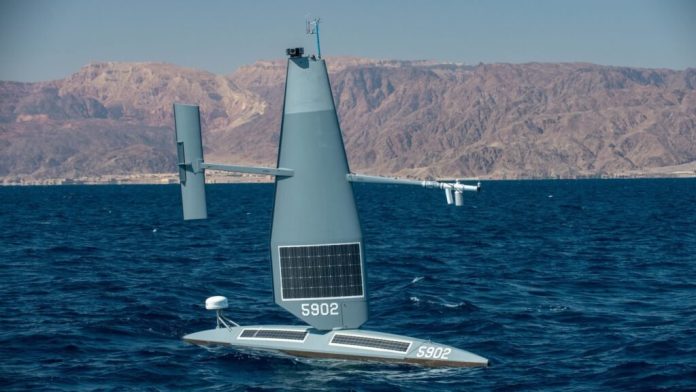 WASHINGTON — Twice in the last month, Iran has attempted to abduct US unmanned surface vessels produced by Saildrone. But the company’s CEO says he was unfazed by the events, instead calling the experience “valuable” and stressing the need for any organization operating unmanned ships to be anticipate hostile interference.

“It’s incredibly valuable experience to truly understand what happens in the field with real adversaries,” Richard Jenkins told Breaking Defense in a Sept. 21 interview. “Whether that’s an actual country, whether it’s just a hurricane or a physical adversary, you have to experience it to understand the features.”

“And if someone takes it, good luck. Keep it, it’s worthless. We’ve got hundreds of them,” he added.

The company’s eponymously named USV became the subject of headlines in late August and September when Iranian navy and paramilitary personnel twice attempted to confiscate drones while they were operating in the Middle East. In both cases, the USVs were ultimately recovered by the US Navy.

In statements following each incident, US Navy officials said the Saildrones were “unarmed and taking unclassified” photos of the environment when the Iranians approached. And to Jenkins, that the drones didn’t possess anything of value is a feature, not a bug of the product.

“You have to plan ahead so that there is no classified information… no security breach, IP leak that the person who stole it could glean from” the vessel, he said. “I think it’d be a very different problem if you had a lot of [Vertical Launch Systems] or other hardware onboard. I think as soon as you weaponize unmanned systems, you actually make it a target of theft.”

If a drone is stolen or destroyed, Jenkins said his company simply deploys another to replace it. And the company has plans to start producing their 65-foot Surveyor USV in greater quantities later this year. In August, the California-based company announced plans to partner with Alabama-based shipbuilder Austal to mass produce the USVs with a number of them already tagged for the US Navy.

Prior to 2020, Saildrone had mostly worked with the National Oceanic and Atmospheric Administration focusing on ocean mapping, water column analysis and fish stock surveys. But when the coronavirus pandemic hit and Navy ships were stuck in port over health concerns for the crews, the military took greater interest in Saildrone, inviting the company to participate in its biannual Rim of the Pacific Exercise.

The pandemic’s health constraints also forced the company to push the limits of its own products further.

“I think it [COVID-19] pushed us to do a lot more remote deployments,” Jenkins said. “We used to ship our drones in the container to the exact place to … assemble them and deploy them.”

But once COVID-19 had spread, it became exceedingly difficult to travel internationally. The result was Saildrone started deploying its USVs from the mainland United States, starting a months-long journey to the destination where it would execute its mission and then make the voyage back home. In one case, that meant deploying from Rhode Island, operating near the equator south of Africa and then returning to Jacksonville, Fla. — all without human intervention.

Those kind of extended deployments without any human interaction are along the lines of what the US Navy aims to achieve with its own unmanned surface vessels, with service engineers trying to work through making those ships reliable enough to persist for months.

For Saildrone, Jenkins said, the solution is wrapped up in the name. If the drone’s engines fail, then the USV uses a combination of wind and solar power to get home.

“That’s an absolutely critical piece that we’ve managed to evolve,” he said. “I think it’s crucial to the practical success of unmanned systems of having alternative power supplies. It doesn’t give them a limit on the deployment.”