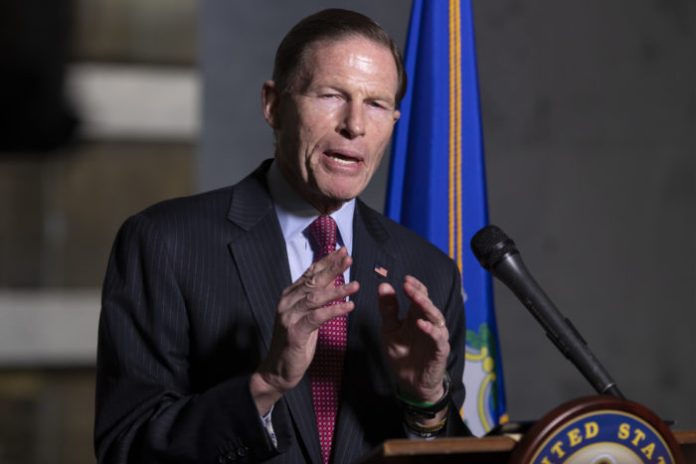 This morning, the Daily Beast published a breathless story exposing the shocking — SHOCKING! — hypocrisy of the National Shooting Sports Foundation. Connecticut Senator Dick Blumenthal sent the NSSF a letter Friday afternoon, accusing the trade association of amassing a secret database — a registry, if you will — of gun owner information including personal information and the guns they own.

There’s only one problem. That’s not what happened.

Da Nang Dick leaked his letter to the Daily Beast last week in a naked attempt at an October Surprise, trying discredit them in the run-up to the election. As the Beast wrote . . .

Blumenthal’s letter cites damning details that were exposed when Cambridge Analytica emails were leaked two years ago but received little attention at the time.

“The claim by Cambridge Analytica that NSSF maintains and leverages a database, akin to a registry, of gun owners’ personal information should come as a surprise to millions of law abiding gun owners, many of whom, undoubtedly, would never have consented for firearms manufacturers or retailers to retain, share, and expose their sensitive personal data for political purposes,” Blumenthal wrote.

The claim is that the NSSF hoovers up warranty card registration data from its member companies on millions of gun purchases and they then heartlessly use this ill-gotten information to campaign against good, hard-working, pure-hearted, clean-minded Gunsense™ candidates who are only working for more Gun Safety® laws to save the lives of innocent children.

The Daily Beast compounds the smear by linking the evil NSSF with the nefarious Cambridge Analyitica, the company that worked with the Trump campaign in 2016 and was the subject of much handwringing and wild claims.

The Beast claims this is all jaw-droppingly hypocritical because the NSSF’s Larry Keane had just decried privately maintained registries of gun owner information.

Larry Keane, who is also NSSF’s top in-house lawyer, appeared on The Reload podcast on Sept. 19 to discuss congressional bills proposed by Democrats that would give the feds a closer look at gun purchases—and possibly pressure banks to identify exactly what firearms, ammunition, and related gear end up on the receipt.

“You have an invasion of privacy,” he said, going on to detail how the existence of any database—in anyone’s hands—could be seized by government agents.

“It’s given to law enforcement or ATF and then all of a sudden law enforcement shows up at your door and says let’s see what you purchased… you have privacy issues wrapped around the exercise of a fundamental constitutional right. It’s very, very troubling,” he said. “They want to see what you’re buying so they can stop you from buying it.”

Oh. My. God. Thank GOODNESS we have someone with the integrity and civic-mindedness of Senator Blumenthal to watch out for gun owners’ privacy, not to mention the sanctity of the federal government’s ban on compiling a firearm registry. What would we do without him?!?

TTAG spoke to an individual with direct knowledge of what really happened here, though, and — surprise! — it isn’t even close to the wild allegations of the assiduously anti-gun Connecticut Senator or the hoplophobic jernalizmists at the Daily Beast.

The NSSF, as you probably are aware, runs a program called Gunvote which encourages voters to support and elect candidates who actually support and defend the Second Amendment. They contract with a company called FC-3 to produce the communications and send out the mailings.

FC-3, in turn, contracted with Cambridge Analytica until 2016 (Cambridge is no longer in business). Cambridge did standard data mining of public information to identify target voters for the Gunvote mailings.

In other words, the Gunvote campaign used exactly the same kind of public information and messaging techniques as virtually every other political campaign in America.

Even if Blumenthal’s allegations were true, this would have been a pretty poor way of compiling a gun owner registry. Only a small percentage of gun buyers return warranty registration cards (have you ever sent one in?) Such a program would only capture a tiny fraction of Americans who own firearms.

We understand that in the past, a couple of the NSSF’s member companies sent warranty cards into the NSSF. The NSSF digitized the customer demographic information, sent it to FC-3, and returned the cards to the companies. That, however, is no longer happening.

In other words, Blumenthal, who’s long been one of the most anti-gun voices in Congress, has concocted a bogus allegation against the NSSF and publicized it a month before the election to try to hamstring the NSSF’s Gunvote campaign and discredit the industry as millions of new gun owners prepare to vote.

So…exactly what you’d expect from a desperate pol who sees things trending against him and hates the fact that the gun industry’s primary representative is based in his own state.

As early voting has already begun in some areas, don’t look for Blumenthal’s ploy to have much of an effect on turnout or support for Second Amendment-friendly candidates. Oh, and don’ forget to #gunvote.

Letter from the Editor: Terror Turns 21