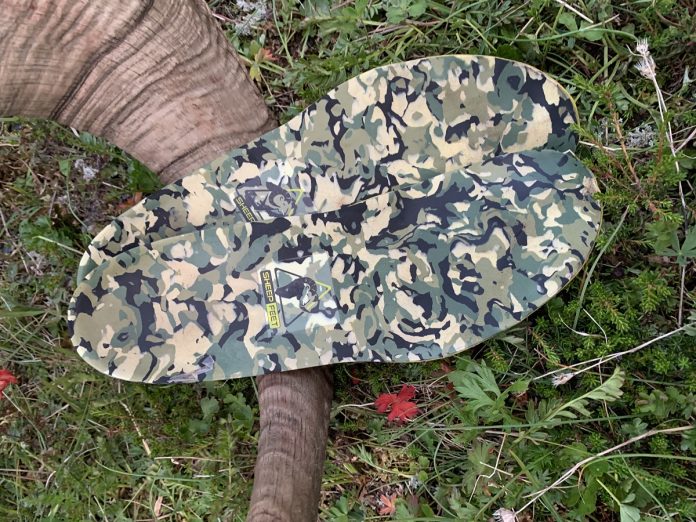 Most people who spend their free time in the mountains chasing game know the importance of good footwear. Those who’ve suffered through a multi-day grind of a hunt with less-than-optimal boots are keenly aware of the strategic role their feet can play in the success of their outing. Low resting heart rates and top-shelf gear are rendered inadequate when a hunter can’t stagger more than a few hundred yards on bruised and battered feet in the middle of a hunt so care must be taken beforehand.

Last year I found myself in just such a situation in the middle of a Dall sheep hunt. We had eyes on a target ram but geography had precluded us from getting within comfortable rifle range for the hunter. We spent rainy days in the rocks futilely trying to close the distance to no avail. When the sun finally popped out and warmed the ice and stone we were patiently waiting in, the moment was seized and a ten-year-old ram was broken down and distributed between three happy sheep hunters. A heavy downhill pack finished off my taped-down toenails and wreaked havoc on my big toe (metatarsophalangeal or MTP joints). I knew I would have to switch some things up for the following season if I wanted to keep frequenting the sheep mountains of Alaska.

Weeks later, I received my SheepFeet impression foam in the mail. Tucked in a sturdy cardboard box, the foam is used to take an imprint of the customer’s feet in a simple, couple-minute process and then shipped back to the SheepFeet lab. A cast is made from the foam for each foot and then adjusted for anatomical correctness giving the user a genuinely custom-built orthotic for each foot. The process took a couple of weeks before my orthotics arrived in the mail; I followed the simple instructions and trimmed them to fit inside my newer, slightly broken-in sheep boots. SheepFeet recommends a break-in period before tackling the mountains as feet need time to get used to the new program and anatomical corrections. Break-in can take a couple of days to a week or more depending on how many adjustments are in the orthotics. I budgeted a month before sheep season and was feeling confident in my new system before I headed north on the first hunt of the year.

This year’s first season hunt was a grinder in several ways: incessant rain, numerous unforeseen miles due to a variety of circumstances, and traversing glaciers, rocks, and rivers provided a field test I feel very confident in. My boots were wet from the second through the sixth day of the hunt due to the hunting conditions with thousands of vertical feet gained and lost before we found success. The day after we set a thirteen-year-old ram on the tailgate of an old Ford pickup, my hunter asked how my feet held up as his were fairly sore and somewhat swollen. “Great,” I replied. “Have you ever heard of custom orthotics?”

SheepFeet orthotics starting MSRP is $205.00 for half-length and goes up from there depending on the options chosen. The Foot Frame (custom molded “backbone” of SheepFeet) part of the orthotic is warrantied for two years from normal wear and tear while the other components are warrantied for one year. A user can expect to get one to two years of heavy use out of them after which time they can be restored for $49.99.  SheepFeet proudly manufactures their orthotics in the USA, you can find out more information on their website sheepfeetoutdoors.com

About the author:
Jordan Voigt is a lifelong passionate outdoorsman. He has been blessed to hunt in numerous countries and several different states, as well as having worked for outfitters in Montana and Alaska as a camp jack, packer, and guide. He lives in Montana with his beautiful wife and is busy teaching his two sons about the outdoors and chasing the next adventure. You can follow him on Instagram @jordan.voigt

How a Custom Fly Rod Is Made