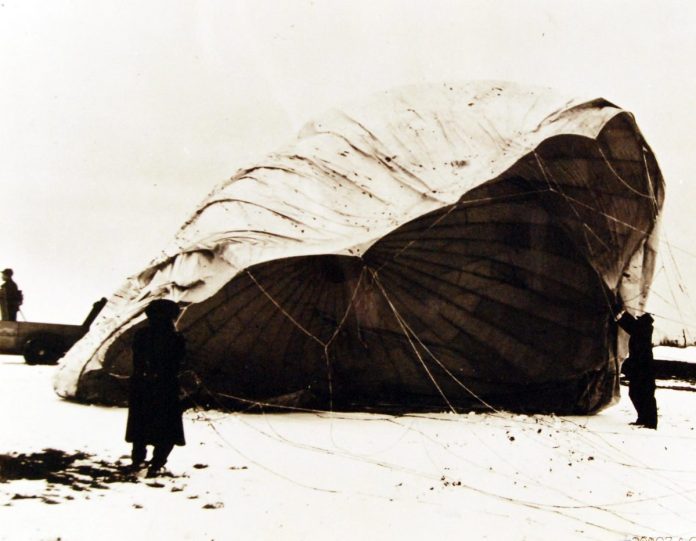 World War II was raging, but the continental U.S. appeared to be a scene of safety.

Twenty-six-year-old Reverend Archie Mitchell and his wife were headed on a picnicking and fishing excursion with five kids from their Sunday school group in Bly, Oregon.

For Archie, the future holds great promise. His wife Elsie was five months pregnant with their first child. He’d just moved to the area to lead a local church.

The nearby area of Leonard Creek by Gearhart Mountain seemed to be the perfect place for a bit of outdoor adventure. But something tragic lurked…

All Is Not As It Seems

As Archie went to the car to unload picnic baskets and fishing rods, he heard one of the children exclaim, “Look at what we’ve found! It looks like some kind of balloon.”

Reverends tend to be heavy readers. Perhaps Archie had read something about these balloons in the papers.

Maybe he had heard a news report or a rumor from a friend. He yelled at the kids not to touch what they found, but he was too late.

A huge explosion roared throughout the wilderness. Archie’s wife and the kids they brought with them all perished in the explosion.

They are the first and only casualties on the continental U.S. during World War 2.

The balloon the kids found was actually a weaponized weather balloon crafted by the Japanese.

After the 1942 American raids on Tokyo, the Japanese were furious. They knew they didn’t have any long-range bombers capable of hitting America.

But they did have the jet stream.

It was theorized that incendiary explosives attached to weather balloons, if sent up at the correct location, could drift across the Pacific of their own accord, causing massive chaos on American soil.

The hope was that California would erupt into flame, fear would be sown, and widespread diversion of resources would be the result of minimal effort.

In a way, the Japanese plan worked.

After the first balloons appeared, a total of 2,700 American troops with firefighting equipment were stationed at key points throughout the western U.S.

Fighter craft were kept at the ready to shoot down any balloons spotted in the air.

Less than 20 were ever actually successfully stopped by American aircraft, though. Few of the balloons actually caused any damage, either.

Americans learned an important lesson, however.

Though the war in the Pacific may have been quite some ways away, they may not be as safe as they originally thought.

War Is No Reason to Put Arms-Control Negotiations on Hold