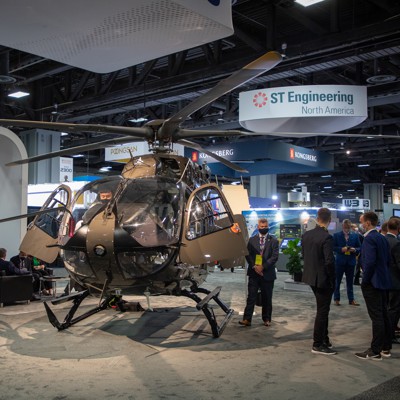 Lace up some comfortable shoes; the Association of the U.S. Army’s annual meeting is here. More than 31,000 people are expected at the Washington Convention Center next week—twice as many as attended the Air and Space Forces Association’s Air, Space & Cyber conference two weeks ago.

AUSA’s conference and trade show comes as the U.S. and its allies continue to supply the Ukrainian military with long-range fires and other types of weapons. Expect to hear a lot about these efforts as well as the resupplying of weapons stockpiles. We’re also expecting to hear more about how inflation and workforce shortages are affecting the supply chain.

This year’s theme is “Building the Army of 2030,” so expect to hear a lot about how the service is working to counter Chinese weapons advances.

The Pentagon says a contract awarded to Leidos’ Dynetics and more than 20 other companies will speed up hypersonic weapons testing. “This agreement for a new Hypersonics Test Bed will increase domestic capacity for hypersonic flight testing and leverage multiple commercially-available launch vehicles for ride-along hypersonic payloads,” the Pentagon said Thursday.

Government and industry officials have frequently said lack of testing infrastructure is slowing U.S. development of these weapons that can fly at five times the speed of sound.

“In order to meet our objectives in hypersonics, we need to be able to launch flight tests much more regularly,” Mike White, the Pentagon’s principal director for hypersonics, said in a Thursday statement. “That’s how we accelerate learning throughout our portfolio of development and demonstration programs.”

Meanwhile, the Pentagon awarded the University of Virginia $4.5 million “to advance hypersonics technology, with a focus on engine design, maneuverability control, and operational resiliency. The goal of the work is to complete technology development and conduct individual component ground tests, culminating in an integrated scramjet ground test during the three-year period of performance.” More here.

GM Defense will develop an electric vehicle battery pack for the Pentagon’s Defense Innovation Unit. “GM Defense will leverage GM’s most advanced battery technology, the Ultium Platform, as it works to meet DIU’s requirement for a scalable design that can be used for tactical military vehicles,” the company said.

Software startup Anduril announced Thursday that it has developed a new “loitering munition” version of its ALTIUS drone. Its larger ALTIUS 700M can carry an up to 35-pound warhead. “The ALTIUS 600M and 700M are designed for expeditionary deployment by air, mobile, ground, or maritime forces, giving them multi-domain launch capability,” the company said in a statement. “The airframe can be launched from any platform including fixed-wing aircraft, rotor-wing aircraft in both high and low altitude, ground and utility vehicles, as well as watercraft.” The announcement comes as Ukrainian military leaders have asked the United States and its allies for kamikaze drones.

BAE Systems opened a $150-million, 390,000-square-foot factory and R&D facility in Austin, Texas. “Work at the site will also focus on new and existing programs including the design, development, and manufacturing of radio frequency and electro-optical/infrared countermeasure systems as well as aircraft electrification technology,” the company said.

Meanwhile, Rolls-Royce has built a 26,000-square-foot factory in Pascagoula, Mississippi, to make propellers and propulsor components. The factory is equipped with foundry and machining equipment purchased with a $22 million Defense Production Act grant.

L3Harris Technologies said it would acquire Viasat’s Link 16 tactical data links for $1.96 billion. Link 16 is the technology used by the U.S. military and its allies to share information, such as targeting coordinates, on the battlefield. The deal comes weeks after L3Harris Chairman and CEO Chris Kubasik told Defense One that the company was looking to grow.

Even though a separate Navy review found that 34 people, including five admirals, contributed to or directly led to the loss of the USS Bonhomme Richard, Ryan Mays is the only person to have faced a court-martial.

Ukraine can reach the “vast majority” of targets with what they already have, a Pentagon official says.

Unlike other Pentagon BYOD efforts, this one taps the cloud for a secure remote work experience.

Keep extras in orbit? Have them ready on the ground? It depends.

Russia and China have overtaken the United States as the world’s premier nuclear-power exporters. But are they comrades or competitors?

How a Prepping Kit Can Help You Respond to Emergencies Faster

How to Fall Gracefully | Field & Stream