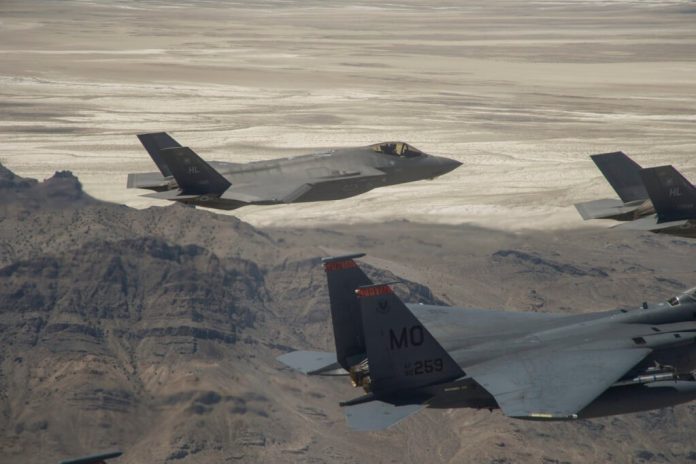 WASHINGTON — In 2019, the Pentagon announced the unit cost of the most common F-35 variant would fall below $80 million in production lots 13 and 14 — a long-held cost target for prime contractor Lockheed Martin that is comparable to an advanced fourth-generation fighter.

But with inflation, the impacts of COVID-19 and smaller annual production volume than what was originally forecasted, it’s unclear whether the F-35 will fall below the $80 million unit cost ever again.

“I can’t look at you in the eyes and tell you I’ll get back below $80 million,” Greg Ulmer, who leads Lockheed’s aeronautics business, said in a recent interview. “But I do think there’s opportunity space … to keep cost out of the airplane.”

Ulmer listed two opportunities to help “chip away at affordability relative to the production” of the aircraft. One involves investigating the “bill of material” — the cost of raw materials, components and other parts that lie deep within the F-35 supply chain, he said.

Another way to decrease costs in the future is to use model-based systems engineering to create a  “digital thread” for major modifications to the F-35, which would virtually map out an exact representation of the subsystem, allowing Lockheed to simulate the design, production and sustainment process with high fidelity. Typically, that process “reduces rework significantly” and improves production efficiency, Ulmer said.

It’s unclear how much Lockheed could cut costs by embarking on those initiatives. But Heather Penney, an F-16 pilot and senior resident fellow the Mitchell Institute for Aerospace Studies, said the focus should be on buying F-35s to meet the rising Chinese threat. (Lockheed, along with other major aerospace firms, is a financial supporter of the Mitchell Institute.)

“Will the F-35 ever get down below $80 million? … I don’t know that it matters,” she said. “We have put so much into the investment and the development of that aircraft, and like it or not is the best that we’ve got. And so we should maximize of the production and the acquisition of that aircraft today until we get the next fighter.”

When people talk about the unit costs of the F-35, most of the focus centers on the F-35A conventional takeoff and landing variant — the most popular (and least expensive) version of the aircraft in service by the US Air Force and most international customers.

In July, the Pentagon and Lockheed reached a handshake deal for F-35 production Lots 15-17, which encompasses about 375 aircraft. While the F-35 unit cost for those batches will be finalized when the contract is fully definitized later this year, it seems all but certain that the F-35A model will exceed $80 million per copy.

At the time, Lockheed stated that “the F-35 enterprise was able to achieve a cost per jet lower than record-breaking inflation trends,” but declined to give further price information. At Lot 14, the price of an F-35A stood at about $78 million.

One big factor contributing to a likely rise in price is a drop in production quantities. The 2019 contract for F-35 Lots 12-14 contained a whopping 478 F-35s for both US and international customers. The deal for Lots 15-17 reduced that by about one hundred planes, more than one-fifth of the 2019 deal.

The COVID-19 pandemic has also had a detrimental effect on F-35 production. Before the pandemic, Lockheed planned to ramp up production to 169 F-35s per year starting in 2022, but disruptions to the global supply chain forced the company to slow down production of the F-35 in 2020. Lockheed has since rebounded, delivering 142 F-35s in 2021 and is on track to hit its new maximum production rate of 156 jets per year in 2023.

“We’re looking at capacity above that, should we have demand for the airplane above that,” Ulmer said. “And we’re also looking at efficiency gain within the labor associated with manufacture, such that we can get more airplanes delivered within a given year.”

However, any increase to the production rate will depend on customer demands, and the US Air Force — by far the F-35’s largest customer — has decreased its annual F-35 procurement, buying 48 F-35As in fiscal 2022 and requesting funds for 33 jets in FY23, down from its previously stated intention to buy 60 jets per year throughout the 2020s.

According to its five year defense plan, the service will slightly increase its buy rate to 47 planes by FY26 and FY27, but Air Force leaders have claimed there is no plan to boost production until the more advanced F-35 Block 4 configuration is available. The F-35s equipped with new computing hardware needed to support Block 4 upgrades — known as Technology Refresh 3 — will begin delivering in Lot 15, another factor that could potentially drive up costs.

Even if F-35 procurement quantities had stayed the same across Lots 15-17, it would have been reasonable for costs to increase somewhat due to inflationary pressures, Penney said. However, lowering unit costs has always been contingent on maintaining a high production rate, she added.

While the Defense Department’s new F-35 program executive, Air Force Lt. Gen. Michael Schmidt, has not yet publicly addressed F-35 unit costs, his predecessor acknowledged that F-35 costs would rise, at least in the short term.

“I think it’s likely that we’ll see costs rise on a tail by tail basis,” Lt. Gen. Eric Fick said in March, adding that it was still too early to say whether an F-35A model would exceed the $80 million cost target.

“We’re trying to figure out how we sort through the headwinds and lead through them to find a place that allows us allows us to get the aircraft we need at a cost that we can afford, while still recognizing some of those challenges that Lockheed faces,” he said.

WATCH: 5-Foot Alligator Removed from the Belly of a Python