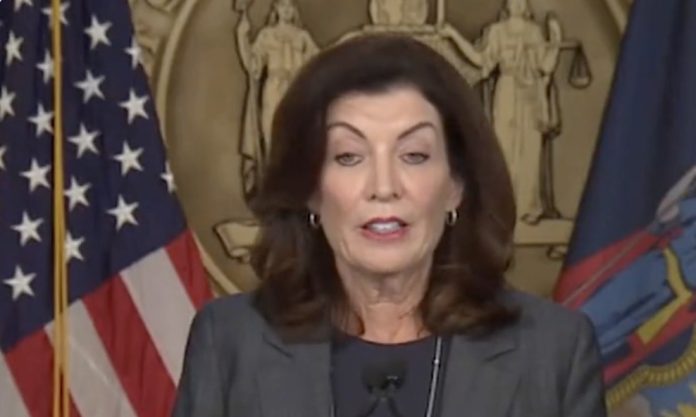 The Hochul administration is frantically responding to criticisms, trying to settle nerves from law-abiding New Yorkers but it isn’t working.

One impact may not be realized until next year. Conservation dollars could suffer a blow because of Gov. Hochul’s gun control laws – specifically her new statewide ammunition registry scheme. Laws that chill Second Amendment rights have impacts beyond their gun control agenda. Those laws could have potential impacts on how conservation efforts are funded – even those in New York.

Gov. Hochul’s new gun law includes greatly expanding the list of “sensitive areas” where concealed carry permit holders can carry guns. It mandates permit applicants’ social media accounts to be “examined for suspicious activity.” It creates a statewide registry to collect and maintain a database of who is buying ammunition. It’s having a chilling effect.

“It’s safe to say my ammunition sales are down 30 percent since the law started [on Sept. 1],” explained Jane Havens, owner of Calamity Jane’s Firearms in Hudson Falls, N.Y. “One of my distributor reps told me he’s not shipping ammo to hardly any New York dealers. ‘I won’t be buying ammo in September. Call me in October,’” he told her. “In seven business days, we’ve gone from 100 mph to zero. The agencies aren’t up to speed and don’t know what to tell us [about the law]. That’s costs us sales.”

New York state receives significant federal funds each year for wildlife management and conservation projects thanks to the Pittman-Robertson excise tax on firearms and ammunition – paid by the firearm and ammunition manufacturers. That has totaled more than $15 billion for conservation since 1937. For ammunition and long guns like shotguns and rifles, it’s 11 percent. On handguns, the tax is 10 percent. In 2018, the Empire State received $28 million. In Fiscal Year 2020, the total was $23.9 million, according to Department of the Interior (DOI) figures. Last year, funding back to New York totaled more than $30 million dollars. The upward trend makes sense due to more than 1 million New Yorkers purchasing firearms over the past two years – and all those new gunowners need ammunition for practice, training and recreational shooting. Given the outsized amount of ammunition needed by law-abiding gun owners, a reduction in ammunition purchases predicts declines in conservation dollars coming back to the state.

‘My Store Should Be Packed’

Pittman-Robertson excise tax apportionments to the states are based on geography and the number of hunting licenses sold. Gov. Hochul’s new gun control laws are already suppressing ammunition sales and appear to be withering away hunting licenses too.

One firearm retailer located in Saratoga County, N.Y., immediately felt the law’s impact as hunting season officially started. “It’s now hunting season and my store should be packed,” the retailer told me, wishing to stay anonymous. “I sold 10 guns on the Saturday before September 1st. Now I’ve only sold two guns all week. No one’s buying ammo because of the registry. It’s dead in here as people don’t know what to do.”

The retailer had one more reason for the lack of business. “We’re one county away from Vermont. That’s where they’re going – our dollars are driving over to them instead.”

If the same chilling effect that’s happening to gun and ammunition sales is to be repeated for hunting license sales, that would directly eat into conservation efforts funded by Pittman-Robertson excise taxes.

New York is home to several state and national parks that benefit from the millions of dollars of conservation funding, supported by outdoorsmen and women. That includes the more than 6 million-acre Adirondack Park north of Albany, comprising almost one-third of New York’s geography. Numerous environmental and conservation groups advocate for healthy wildlife and robust conservation efforts in the park, but few have said a word about the devastating effects Gov. Hochul’s gun restrictions will have on them – specifically the ammunition registry.

The Adirondack Council is the largest of the groups. They praised the governor when she assumed office, saying only, “Lt. Gov. Hochul has shown a strong interest in Adirondack Park wilderness protection, clean water, and community development.” It was total silence from the group on the impacts Gov. Hochul’s gun law will have on their efforts.

State legislators are already trying to right Gov. Hochul’s ammunition missteps. Republican state Sen. Dan Stec said, “We’re already seeing an immediate, massive reduction in these ammo sales. Practice and trap ammunition purchases are a significant source of revenue for local retailers and play a large part in funding our environmental conservation efforts. A decrease in ammunition sales means a decrease in funds. By criminalizing and monitoring ammo purchases, Democratic legislators haven’t only infringed on our Second Amendment rights; they’ve put the health and well-being of our natural environment at risk.”

Jane Havens summed up the contradictory silence from the New York environmental groups who have done nothing to oppose or correct Gov. Hochul’s harmful law. “They don’t realize it. They are going to see the consequences,” Havens said. “These groups don’t put their money where their mouth is. And the gun industry does.”

Time will tell what the funding consequences will be for New York’s conservation efforts. Gov. Hochul’s ammunition registry won’t solve crimes or hold criminals accountable, but it will hurt efforts to keep the state’s wildlife and conservation projects growing and going strong.

Portland art event lets black people in for free, charges everyone else $80

Run This Checklist on Your Bow Before Opening Day

The heightened risk of nuclear war. Mega-Rich Plan for Doomsday