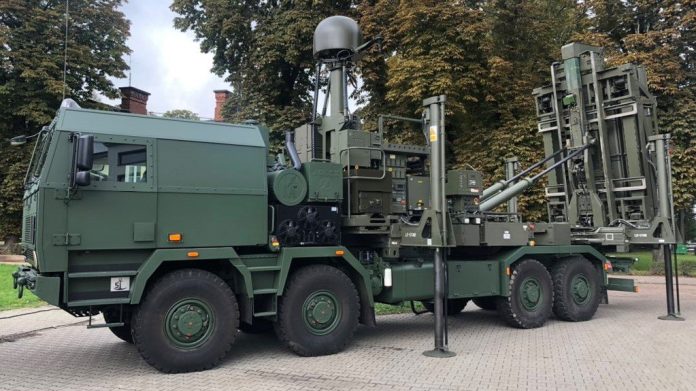 WARSAW — The defense ministers for Poland and the United Kingdom this week signed a series of agreements to move forward on military collaboration, as the Ukraine conflict continues to drive home the necessity of European co-development efforts.

In an Oct. 4 ceremony at the Zamość Military Base in Poland, Poland’s Deputy Prime Minister and Minister of National Defence Mariusz Błaszczak was joined by UK Defense Secretary Ben Wallace to both sign the new agreements and to hand over the first of Poland’s new “small” Narew SHORAD systems, produced in partnership with MBDA UK and Polish industry.

“We are drawing conclusions from the war that is taking place in Ukraine. We know the methods used by the Russians who attack Ukraine, we know how the Ukrainian army’s resistance is built, and we have no doubts that anti-aircraft and anti-missile defense are an important element of security,” Błaszczak said. “That is why we started the process of cooperation with United Kingdom, which resulted in the fact that the Polish soldiers received system operators’ certificates, and the Polish Army will be equipped with elements of the ‘small’ Narew.”

For his part, Wallace added that the UK has “had a close defense alliance with Poland for over 150 years, and as we face the threat from Russia, we need the equipment and the capabilities to safeguard our people and preserve European stability. Our new agreements demonstrate that commitment and the UK’s support for Poland’s defense modernization plans.”

The first document signed by the two ministers is an Air Defence Complex Weapons Memorandum of Understanding (MOU). Per a UK statement, the MOU “enables the UK and Poland to cooperate in the development and manufacture of current and future complex weapons, further strengthening the relationship built through the UK/Poland Defence and Security Cooperation Treaty and deepening the interoperability of both countries’ armed forces.” As part of the MOU, the two ministers agreed to create a new working group, which will “explore the potential for the UK and Polish Armed Forces to cooperate on the development of a Future Common Missile.”

What that missile looks like is unclear, as requirements are still in development. According to the UK release, the weapon is “envisioned to be a medium-to-long range, surface launched missile that can be used in both land and maritime environments and will be a development of the CAMM family of missiles.” (UK officials are focused on developing long-range strike capabilities, and have also had discussions with France on making sure future weapons are interoperable.)

The ministers also signed a Statement of Intent on a frigate agreement built around the Arrowhead-140, a frigate design from UK firm Babcock. The statement provides a framework for the two governments “to collaborate on the procurement and operation of three Miecznik frigates, which will be a variant of the Arrowhead-140 frigates.”

Taking Narew Steps Towards SHORAD, With New Systems To Come

Not to be overlooked in the ceremony is Poland’s acceptance of the first part of its Narew system, which officially launched roughly a year ago.

The basic task of Narew is the protection of Polish Armed Forces units, facilities and air bases. It will compliment the Wisła (the Polish name for the US-made Patriot) medium range air defense and anti-ballistic missile system, to create a national, allied and coalition air defense system in all-weather, day and night conditions. The Narew system will be used primarily to engage multi-role aircraft, cruise missiles and UAVs operating at low altitudes.

The “small” Narew system is a pilot project for the construction of the broader Narew modern SHORAD system. The integration of components under the “small” Narew confirms the compatibility of the Ilauncher launcher with Polish components, such as the fire control station and radar.

“Within a few months of signing the contract, we are pleased to provide soldiers with certificates of readiness to operate this modern air defense system. Today’s ceremony is the result of the work and commitment of Polish engineers who have proven their skills. It is also a confirmation of the effectiveness of the Polish-British partnership. Progress in this area is a good sign for the future, because we treat the ‘small’ Narew as an introduction to the implementation of the Narew program, which will take the Polish industry and the army to a new, higher level,” said Sebastian Chwałek, President of the Management Board of PGZ.

The subject of the contracts, which should be completed in 2023, will be project management and the delivery of components for 21 PSR-A Pilica+ systems. The delivery of the first completed system is expected in 2024, and the next step will be to conduct operation shooting.

Pilica+ anti-aircraft missile and artillery systems will be yet another layer for air-defense, complimenting Narew and Wisła by providing the shortest-range anti-aircraft system. Each Pilica+ system includes a command post, short-range radar, six fire units with artillery tractors, communication subsystem, ammunition vehicles and transport vehicles, which will be supplemented with short-range missile launchers and redeployable Bystra radars. At some point in the future, they will also be equipped with anti-aircraft guns with 23mm programmable ammunition and a counter-UAS system. The MBDA CAMM missiles are the first choice effectors for the Pilica+ launchers.

As part of this process, Polish and American SICO teams carry out an inventory of deliveries and carry out the final assembly of military equipment, as well as perform the first commissioning and tests of the correct functioning of the system. Getting a positive result from the tests is a necessary requirement for the transfer of the Wisła system to Polish air defense units.

SICO is a process divided into 3 stages. The first stage will concern the integration of the M903A2 launchers of the Patriot system with other elements of the system and will be implemented in Toruń. The tests of the Integrated Air and Missile Defense Battle Command System (IBCS) will be carried out in the next stage at the 37th Air Defense Squadron in Sochaczew. Finally, the complete Patriot /IBCS system will be checked, again in Toruń.

As part of SICO, all delivered elements will be checked, from the radars and transponders to the actual interceptors. Completion of the SICO process, which is planned for the second quarter of 2023, will be a milestone to achieving Initial Operational Readiness for the Wisła system units.

In accordance with the current schedule, Basic Operational Capability is planned for 2023 and is to take place with the successful completion of the certification exercise, which will be preceded by the stage of training and matching subunits. According to Poland’s MND “the experiences and conclusions obtained under the SICO procedure implemented for the first phase of the Wisła program will translate into the improvement of future processes related to the integration of subsequent systems acquired under the second phase of the Wisła program and under the Narew or Pilica+ programs, therefore the SICO process is one of the foundations for the construction of an integrated air defense and anti-ballistic missile system of Poland”.

Ultimately, the Aviation Technique Workshop in Toruń is to become an essential military maintenance center for Polish anti-aircraft and anti-missile defense systems.

TIPS FOR TRAVELING WITH YOUR SPORTING DOG

“All these were reckoned by genealogies…”