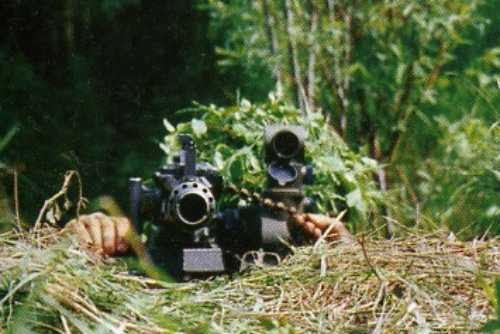 I’m going to insert a small piece on suppression by infantry fires, as the comments in the last piece on short and long range infantry brought this up.

The bigger calibre (7.62×51 mm rather than 5.56×45 mm) is widely believed to suppress effectively in a large radius around the trajectory. The suppression effect stems from justified fear after hearing the sonic crack of a bullet passing nearby. So no subsonic bullets for suppression, please. The bigger calibre weighs more and is more bulky than the smaller one, but it can still be more efficient if you don’t expect to miss very closely. So suppressing someone who occasionally pokes his head out of two windows may better be done with 5.56×45 mm single shots, while suppressing a line of hedges 30 m wide at 300 m distance is much better left to the 7.62×51 mm calibre.

“One rule of thumb states that a soldier will become suppressed if a bullet passes within one metre of him every second, and stay suppressed if one bullet passes within one metre every  three seconds. […] The one-metre rule does not fit with what has been seen in real small-arms firefights. For example, Second World War [when mostly calibres similar to 7.62×51 mm were used] field studies suggested that one round passing within three metres every six seconds would appreciably degrade return fire from a whole fire-team, and two rounds every three seconds would prevent any return fire at all.”

“War Games  The psychology of combat” by Leo Morray

Neither phase works on hostiles who use a periscope and don’t need to expose themselves to aim & shoot. This is particularly relevant for well-sited tripod-mounted machineguns.

We saw remote-controlled sniper rifles used in Syria and other conflicts; these won’t be suppressed, either.

Much depends on the situation and on the small unit leadership here. A well-trained non-commissioned officer leading the infantry section is often expected to control and direct the firing of the section machinegun (especially if it’s a 7.62×51 mm GPMG). He’s supposed to use magnifying optics to find and identify the main threat, then order suppressive fires on it. The rest of the squad should shoot in the approximate direction he directs, and cease fire when he signals it. A section leader who can do this with a disciplined squad may succeed with phase 1 very quickly and with relatively small munition expenditure. He’ll also be able to transition to phase 2 soon and thus save even more munitions. Let’s call this section “frugal”.

Other infantry sections (and indeed other armies) will react to shots taken at them with mad firing, guessing where it comes from and expending a thousand or more rounds as a section in a minute. They may also not be frugal with munition in phase 2. Let’s call this section “mad minute”.

Section “frugal” can very well do its job with 5.56×45 mm calibre and even machinegunners using 30 rounds magazines (“automatic rifleman”). At least one thermal sight (for the section leader, ideally periscopic) will help greatly. Their weapons will not overheat, and they can easily carry enough munitions for an afternoon of (non-continuous) firefights.

Section “mad minute” does not require as much training, but it would be best-served to have one if not two (as late German WW2 mechanised infantry sections) 7.62×51 mm GPMGs. Its optimal weapons are much heavier and it needs to carry more and heavier munitions. It may very well be a lot less lethal and it’s certainly less agile on the battlefield due to the greater weights. An upside is that it’s going to be better when the locations of hostiles are very hard to discern or if the section needs to gain fire superiority almost instantaneously, as it has no decent cover available. Furthermore, its weapons will have an edge at penetrating obstacles and hard body armour.

So you can go all lightweight on small arms (all 5.56×45 mm carbines and magazine-fed light machineguns/”automatic rifles”, modest quantity of rounds carried) and greatly emphasise agility, but you need to be capable of applying the firefight drills that work with that.

P.S.: A
factor for suppression may very well be whether the suppressed hostiles
think they know where the shots are coming from. They may have engaged a
section and suppress it, then get engaged and suppressed by another
section. They will feel extra fear of the unknown until they believe
they know where the second section is. Morale will be hurt especially
much if the 2nd section wasn’t expected (hostile reinforcements always
hurt morale if it’s not a turkey shoot) and if it’s shooting from the
flank or even from the back.

How to Become Great At Shooting UNDER PRESSURE