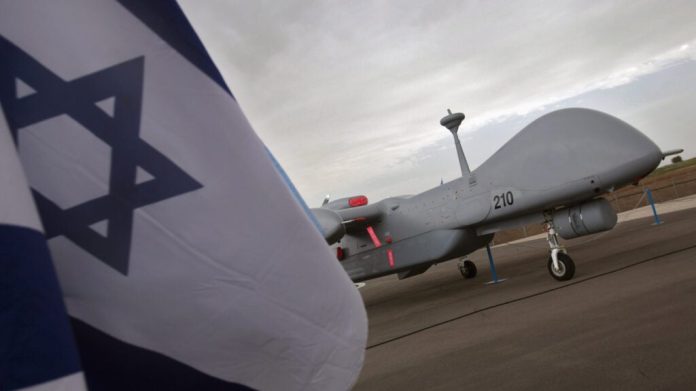 The Eitan, or Heron TP, the Israeli Air Force’s latest generation of Unmanned Aerial Vehicle (UAV), is displayed during a ceremony introducing it into the 210th UAV squadron on February 21, 2010. (David Silverman/Getty Images)

At least three such armed UAVs are now in different development stages. Some are upgrades of currently operational systems, while others are totally new designs. The effort is focused primarily on longer endurance, as well as lowering the signature of the systems. For instance, the Hermes-450 is powered by a Rotax engine, which is very noisy; that’s not a problem when used over Gaza or the West Bank but could be problematic in longer-range scenarios. (Some years ago, the IAF with Elbit attached mufflers to the engine to lower the sound signature, but it is not enough, and new versions may be powered by other types of engines.)

Beyond distance and stealth, sources were unwilling to share in-depth details about what the Israeli MoD is seeking from industry. However, it appears the wish list includes special payloads that would enable upgrading the mission details while the platform is “far, very far” from Israel, per one industry source. Special weapon systems that are light and carry “very powerful” warheads and the option of air refueling of armed UAV’s is also “on the table,” according to a second source with knowledge of the discussions.

That Israel has homemade armed drones has been an open secret for years, but the government only lifted a gag order censoring any discussion about the systems in July. According to multiple sources, the move came as a result of growing pressure from Israel’s domestic military industry, which hopes to cash in on the systems with markets abroad; one industry source told Breaking Defense there are already “ongoing” discussions with potential customers.

However, Israeli defense sources said that these two UAV’s are only the “tip of the iceberg” and that the IAF is using additional platforms equipped with special payloads and special weapon systems. However, the specifics of these UAV’s are highly classified even as they perform missions almost daily.

“The capabilities of these UAV are huge, and they enable Israel to perform long-range pinpoint attacks on targets all over the middle east,” one of the sources said.

The last one according to sources happened on Tuesday when UAV’s claimed to be Israeii, attacked a convoy of trucks on its way from Iran to Syria.

The reports claimed that 15 people in the convoy were killed and that the trucks and tankers were destroyed. The convoy was attacked in Abu Al Kamal, a border town frequently utilized as a shipment point by militant organizations linked to Iran’s Revolutionary Guards.

The almost daily use of UAV’s some of them armed with a variety of weapons explains the fact that 80 % of the total number of flight hours performed by the IAF are with UAV of different types.

Tal Inbar, an Israeli defense analyst, told Breaking Defense that the global demand for armed UAVs is soaring. “Israel has developed some of the most advanced armed UAV and the dedicated munitions,” he noted, but emphasized that the Israeli Air Force has wisely invested a lot of work in developing the operational procedures aimed at getting best results from operating these systems.