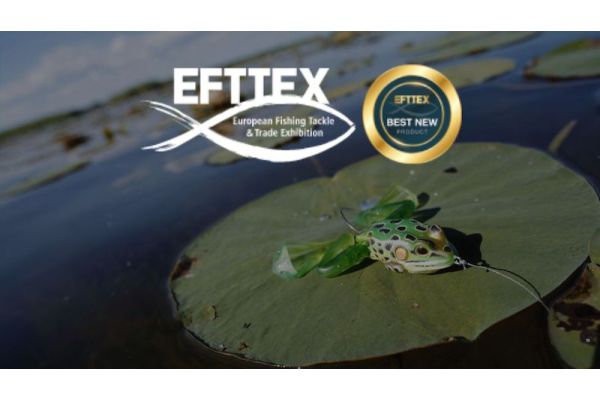 Mustad’s enduring legacy in the fishing industry is unsurpassed. A universally-recognized global leader in the production of premium tackle, the Mustad family of brands – including LIVETARGET and TUF-LINE – is supported by a foundation of design and manufacturing excellence that delivers the quality and performance demanded by the most discerning anglers. Mustad innovation was on full display in the 2022 EFTTEX Digital Best New Product Showcase, collecting trophies and industry-wide accolades in the Soft Lure, Terminal Tackle, and Hard Lure categories.

The thrill of a surface attack from an apex predator is unsurpassed. Triggering topwater bites from supersized bass – the smartest, wariest, and most cunning ones in the school – requires unmatched realism in both form and function. Leveraging a battle-tested research and development process, the master lurecrafters at LIVETARGET tap directly into the DNA of surface predators with the ULTIMATE FROG: The first – and only – frog lures that look AND act alive! When motionless, the LIVETARGET ULTIMATE FROG sits just like a living frog at rest, with its eyes just above the surface, its body angled 45-degrees down, and its legs contracted beneath its body. When twitched or pulled, the ULTIMATE FROG’s body dips beneath the surface as its legs hinge at the hips and knees, extending to full length in perfect unison – just like a living frog as it swims for its life through open water. At the end of this stride, the lure’s legs tuck back in toward the body as its eyes break the surface, in an intricate sequence of biomimetic motions that bring the LIVETARGET ULTIMATE FROG to life. With a body molded from ABS plastic and legs crafted from highly elastic and durable TPE, the ULTIMATE FROG is engineered to withstand the rigors of the surface battlefield. Its well-positioned single hook delivers unmatched hooking percentages in the unforgiving topwater angling environment. Both Popper and Finesse models of the LIVETARGET ULTIMATE FROG have MSRP’s of $17.99, and are available in 2- and 2 ½-inch sizes with an array of 8 compelling colors that turn the most skeptical bass into ravenous eating machines, primed for surface attack.

Precision meets purpose in the all-new Mustad JAW LOK series: The first and only inline treble hook manufactured by a completely automated process, eliminating the hook-to-hook variability – and uncertainty – associated with individually manufactured trebles. The culmination of a 20-year quest to fully automate the production of inline trebles, Mustad’s JAW LOK stands as the most precise – the most perfect – treble hook ever manufactured. Every quantifiable aspect of treble hook design and composition – from weights and gaps to the alignment of the tines and more – is identical from one JAW LOK to another. This new world of precision tolerances and complete reproducibility makes every JAW LOK treble hook – quite simply – superior. JAW LOK features an inline design with the hook eye aligned perfectly with one tine. When rigged on lures, JAW LOK belly hooks tuck against the lure’s body with one tine pointed straight down, while tail hooks trail the lure precisely with one tine pointed straight up. The lightest trebles in their class, JAW LOK hooks allow baits to track truer and deliver improved hook-up ratios. The ultimate consistency of JawLok trebles ensures that baits exhibit optimized strike-triggering action. Each JAW LOK features Mustad’s UltraPoint technology, which keeps hooks sharper, longer. JAW LOK trebles feature a Titan Steel coating with a sleek gunmetal finish, providing each with over 750 hours of saltwater corrosion resistance – more than 20 times longer than typical black nickel trebles. JAW LOK’s fully forged hybrid design maximizes gap and hooking power, keeping fish pinned after the strike. JAW LOK trebles are available as 3X, 4X, and 5X strong hooks with sizes ranging from 8 to 5/0 and MSRP’s starting at $8.99.

Building on its win as the ICAST 2022 Best Saltwater Hard Lure, the innovative LIVETARGET LIVE SHRIMP is the first shrimp imitation that both looks AND acts alive. Perfectly mimicking a vulnerable, exposed shrimp falling toward the bottom – and then scurrying for safety once it gets there – the LIVE SHRIMP features a unique swing weight system that ensures a horizontal profile as the shrimp falls through the water column or crawls across the bottom. Insightful design of the swing weight ensures that the LIVE SHRIMP is slightly off-balance, creating a lifelike wobble as the lure descends or is retrieved across the bottom or within the water column. Interchangeable swing weights allow anglers to fine-tune the LIVE SHRIMP’s rate of descent through the water. An ABS plastic body stands up to the abuse dished out by rocks, shell beds, mangrove roots, and angry inshore predators, while buoyant, high-action TPE legs provide nervous fluttering action during all phases of the retrieve. Equipped with a low-frequency knocker to beckon fish from far away, the LIVE SHRIMP is armed with a stout Mustad hook that converts bites into fish in the cooler. Named the Best Saltwater Hard Lure at ICAST 2022, the LIVETARGET LIVE SHRIMP is available in 3-inch and 3 ¾-inch sizes, each in eight biomimetic colors that will fool the oldest, wariest fish. The LIVETARGET LIVE SHRIMP has an MSRP of $14.99.

Discerning anglers demand quality, performance, and innovation – and the Mustad family of brands delivers. Look for the LIVETARGET LIVE SHRIMP, Mustad JAW LOK trebles, and the LIVETARGET ULTIMATE FROG at your favorite retailer soon – and hanging from the mouths of trophy fish soon thereafter!

Mustad has led the global hook market since 1877. Mustad’s mission is to create a comprehensive multi-brand company that leads the fishing tackle industry, while focusing on innovation, employee and customer satisfaction, and sustainability. With the addition of TUF-LINE and LIVETARGET, Mustad continues to solidify its position as a complete sports fishing brand family.