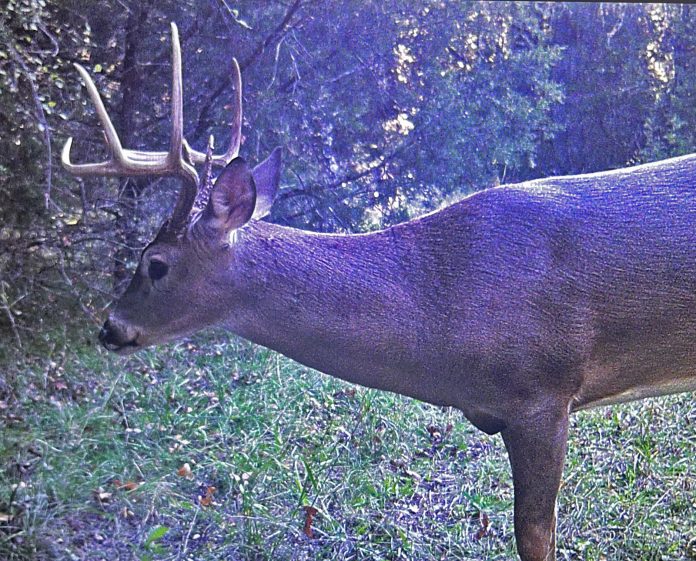 My newest hunting buddy is my step daughter’s son Champ. He is a natural born outdoorsman and at 13 years old he’s spent more time in the woods; and likely knows more about woodsmanship and understands more about locating and hunting our local wild game, Whitetail deer and wild hogs, than most 30-40 year olds do.

I’m not lying, Champ has spent plenty of his time in the surrounding woods and he knows his way around in the whitetail woods.

During the deer and wild turkey season two years ago Champ told me wanted to zero in on a big wild boar showing up regularly on his mobile game camera at one of my ground blind stand sites, and he wanted me to go along and take pictures and possibly video the hunt. The previous day I had hunted in a weather worn, years old, dirt floor, tin shed that I use for a ground blind.

Before long my area got nuts with deer activity, all does, but that’s ok because the rut was coming on right then and this steady flow of does in and out of my area might just get the attention of a mature buck.

Three of the members of our deer lease were also down to hunt, Richey, John and Bryant. I kept up with everyone by texting them and they were seeing deer also. An hour before dark 5 does were scattered around my area; on the slope in front of me, in the valley the slope led to, on the nearby hillside and in the surrounding strips of woods.

Something caught the does attention and they all looked in the direction of a nearby area to my right that was out of my view.

As I watched that direction a buck walked around the right corner of the shed and right into my view. He was only a few feet away from my cut-out shooting window in the blind’s wall.

He was a big, mature buck, and not just that, he was the semi-legendary and elusive ‘Crown Buck”. Based on game-camera pics and a few sightings of him by Richie, Robbie and myself over the last few years he was at least 5 1/2 in age. And he was a buck that holds down the nickname of the “Crown Buck”, named so because of his straight and evenly spaced vertical tines, and his highish rack, and the circular shape of the main beams.

I quietly stepped backward and gripped my crossbow’s handle in my right hand and my iPhone in the left.  turned it on, if possible I wanted his picture. Now ‘Crown Buck’ was standing smack dab in front of my cut-out viewing (and shooting) window. Being well practiced at taking one handed iPhone pictures, I got the buck in view and touched the take-picture button.

Woops!!! A big doe was coming into view around the left corner of the shed. I slid the iPhone into my jacket pocket.

Oh No! ‘Crown Buck’ looked into the cut-out window, right at me.