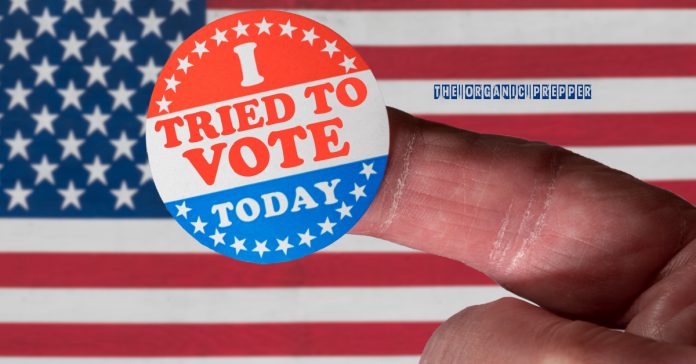 Over the past six years, in particular, confidence in our election process has plummeted. Half the country said that they expected voter fraud in the midterm elections. Only 20% of those polled said they were “very confident” about our elections.

Much of this has to do with our politicians and our media, who cast doubt on close elections before they even happen. They cry foul before the fouls occur. They scream at the top of their lungs that if they lose, somebody cheated.

And despite popular mainstream opinion, it can’t all be blamed on right-wing voters.

Remember during the 2020 election when Mrs. Clinton refused to concede to Mr. Trump on election night? To this day, she still swears that the election wasn’t fair, repeatedly calling Trump an “illegitimate president” and saying, “There was a widespread understanding that this election [in 2016] was not on the level. We still don’t know what really happened.”

Despite the fact that the mainstream media blames Republicans and  Trump supporters for the lack of faith Americans feel about the process, going so far as to paint them as a “threat to democracy,” there are other factors at play.

Clinton has also planted that seed and continues to fertilize it with suggestions like the one that Biden should not concede the election under any circumstances in 2020 had the election been called for Trump, and this doozy:

Clinton did nothing to show her leadership and try and calm things down when riots erupted after she lost the election. Instead, she stood silent, and in that silence is complicity.

This isn’t just a Clinton problem, however. It’s a Democrat problem. In the history of the 2000s, they’ve disputed every single loss.

In the build-up of Trump vs. Biden, the fears of voter suppression, dead people voting, voting machines going haywire, and ballot dumps ran rampant. This was fueled by both sides of the aisle.

After Biden was announced as the winner, it was like an instant replay of the 2016 decision, except for two primary differences: Trump was the one who said that the election was rigged, and supporters didn’t riot throughout the cities of America on Election Night.

This election was so strongly contested that extreme protests did break out on January 6, 2022, when Biden’s election was to be certified by Congress.

Again, there was a major difference. People who participated in that event were called “insurrectionists” and are still, to this day, standing trial. To my knowledge, nobody was prosecuted for the property damage and violence that took part after the 2016 election.

A documentary was made.

A documentary called 2000 Mules was made by Dinesh D’Souza. Here’s the description of the film:

2000 Mules exposes a massive network of coordinated fraud across all five of the states that decided the election. This fraud was more than sufficient to change the outcome. The film uses two types of evidence. The first is geotracking which monitors the cell phone movements of mules or paid criminal traffickers delivering illegal ballots to mail in drop boxes. It’s a new technology used for the first time to bust a very old type of fraud. The second is video evidence, obtained from the official surveillance cameras installed by the states themselves. The film takes you to the scene of the crime, again and again and again. You can actually watch the criminals at work. Finally, the film decisively answers the most important question is who really won the 2020 election? This is a movie that documents the biggest heist in American history. Its goals are to reveal how it happened, who did it, and how to make sure that this never happens again.

Unsurprisingly, the mainstream media quickly began calling it “the debunked conspiracy film” and saying that it, too, was a threat to democracy. Watchdog groups suggested that the documentary might be a “pretext” for more “restrictive voting laws” in the future.

Before the 2022 midterms, polticians and pundits warmed of election tampering.

The most recent midterm election was one of the most hotly contested elections I’ve ever watched. And in the midst of all that were more warnings about election fraud.

We are witnessing a concerted attempt to destabilize the democratic process and delegitimize our multi-racial democracy, carried out in full view of the American people. As Democrats, it’s not enough to push back one law, one court case or even one election at a time. We need to fundamentally change the way we think about and fight back against this blatant, sweeping effort.

She also concluded (ironically, given her response to her 2016 loss):

“When the people make their voices heard in an election, we should respect the results. These aren’t partisan statements; they’re attributes of a functioning democracy.

Same thing is happening with Voter Fraud as happened in 2020???

Clark County, Nevada, has a corrupt voting system (be careful Adam!), as do many places in our soon to be Third World Country. Arizona even said “by the end of the week!” – They want more time to cheat! Kari Lake MUST win!

They are now saying that about 20% of the so-called Voting Machines in Maricopa County are not counting the Votes that have been placed in the Machine. Only Republican areas? WOW! Kari Lake, Blake Masters, and all others are being greatly harmed by this disaster. Can’t let this happen, AGAIN!!! I believe Attorney General Mark Brnovich is on the case, big time. He has a chance to be the biggest hero of them all, and at the same time save our Country from this Cancer from within!!!

The Democrats that run Pennsylvania have just stated that Pennsylvania may not have a final Vote Count for MANY days, and yet they use these very expensive “machines,” for SPEED. Go to PAPER BALLOTS, SAME DAY VOTING, MUST HAVE VOTER I.D., PROBLEM SOLVED. Also, big money saved!!!

Stacy Abrams of Georgia went so far as to go to court to have her last failed gubernatorial race overturned. She lost her suit, and then she lost again in her rematch against Governor Kemp in 2022.

(Regardless of elections, it’s important to make sure you can feed your family. Check out our free QUICKSTART Guide to building a 3-layer food storage supply to help with this.)

Everyone seems convinced the election system is flawed.

The lack of trust in the election process is not just a right-wing thing, a left-wing thing, or a crazy conspiracy theorist thing. It’s the whole damned bird.

Regardless of where you stand, it appears that almost everyone believes that our election system is flawed. Both sides agree on this, but the sticking point is that both are accusing the “others” of doing the rigging.

The lack of strong confidence in the country’s ability to conduct an honest election crosses partisan lines. Among Democrats, whose party leaders have been struggling to legislatively protect what they believe to be deteriorating voting rights across the country, 30% say they are very confident in the U.S. election systems overall. Regarding independents, only 1 in 5 consider themselves “very confident” in the nation’s elections.

Even fewer Republicans (13%) are very confident, with a considerable majority (59%) having little faith in the system, responding that they either are “not so confident” or “not confident at all,” a snapshot of growing skepticism…

So here’s my question:

If nobody believes that the results are valid, does it even matter who is said to have won?

Sure, the person who is sworn into whatever office it happens to be will have the temporary power that comes with their new post, but if nobody except their supporters believes that they are there legitimately, how will they ever get things done? Remember “not my president?” That’s escalated to a whole new level because nobody, anywhere, really trusts the system now.

Twenty-eight percent of all voters, including 41 percent of Republicans, said they had little to no faith in the accuracy of this year’s midterm elections.

“I do agree that the biggest threat is survival of our democracy, but it’s the divisiveness that is creating this threat,” said Ben Johnson, 33, a filmmaker from New Orleans and a Democrat. “It feels like on both sides, people aren’t agreeing on facts anymore. We can’t meet in the middle if we can’t agree on simple facts. You’re not going to be able to move forward and continue as a country if you can’t agree on facts.”

… A majority of voters in both parties identified the opposing party as a “major threat to democracy.”

If we can’t figure out a way to work together, our very existence as a nation is at risk. If we feel like our voices don’t count, what’s to keep us continuing to try? It doesn’t even matter if there are actually shenanigans afoot. If nobody accepts the outcome when their chosen candidate loses, our election process has failed. What’s the point?

I don’t have the answers. I just know that the United States of America we once knew is gone.

What will take its place?

What do you think?

Do you trust the results of the midterms? What evidence makes you trust or mistrust these results? Do you feel represented? How do we move forward as a country?

Let’s talk about it in the comments.

Daisy is the best-selling author of 5 traditionally published books, 12 self-published books, and runs a small digital publishing company with PDF guides, printables, and courses at SelfRelianceand Survival.com You can find her on Facebook, Pinterest, Gab, MeWe, Parler, Instagram, and Twitter.

4 Diseases That Could Become Deadly After SHTF