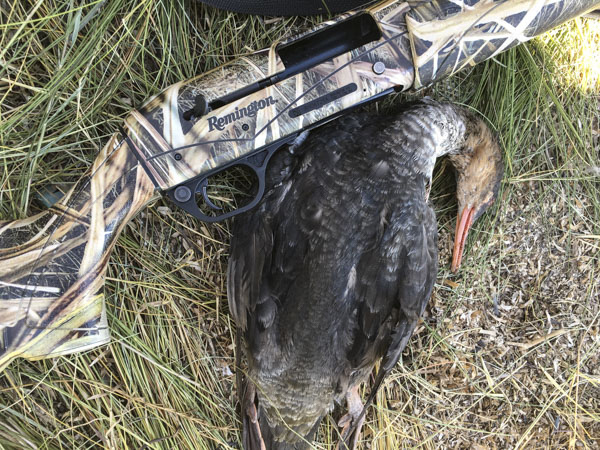 I’m not much of a hunter. Yes, I have hunted, and the proof’s hanging over my desk at home. But I think I’ve probably shot my last ungulate. I just never had the hankering true hunters get to be out there and bring down four-legged non-frozen meat on the hoof. Birds, on the other hand, are a different story.

I love me some scatterguns, and while there are certainly better shotgunners, I’d rather spend time shooting trap or sporting clays than just about anything aside from sidling up to a plate of Stiles Switch brisket. Or a SLV OG bahn mi. Which probably explains why the idea of a bird hunt of some sort appeals so much. And I’ve always wanted to try a duck hunt.

That’s how I found myself in camo gear, standing in the dark on the dock at the Flora-Bama Marina — smack dab on the Florida/Alabama border (strangely enough) — at 04:00 a couple of weeks back. I was there to meet Intercoastal Safaris’ main man, Stephen Lee along with cap’n Aaron Abbott. Getting up at oh-my-God-thirty goes against virtually every fiber of my being, but you gotta be where the ducks are when the sun comes up. Or so I’ve heard. Which is why we shoved off at about 04:20 and plunged into the 40 degree pre-dawn darkness, making our way east on the Intercostal Waterway.

Skimming along the Florida/Alabama state line at 20 mph, I could barely make out Perdido Key to our right and what I later found out was Ono Island on our left. Our motor woke up a pelican on nearly every mile marker we passed on the nearly half-hour trip to the preferred spot Stephen and Aaron had chosen. The location of which I was sworn not to divulge.

First order of business: set out the decoys. That area of the Gulf coast features clear shallow water and is primarily known for three species of ducks; buffleheads, blue bills, and redheads. It took us about a half hour to get everything in place, by which time the rosy orange glow of the sun began to appear on the horizon. There’s no shortage of places along the greater Mississippi flyway you can set yourself up in anticipation of southbound waterfowl on the wing. But there probably isn’t a more congenial one for hunters than the Florida/Alabama coastal area. Warm(er) weather, beautiful beaches, luxurious hotels, and great food as far as the eye can see. While it was chilly that morning, we weren’t breaking ice for our decoys or slipping heat packs into our waders like our fellow hunters do in Arkansas, Missouri, Illinois and Iowa.

And that’s one reason Stephen and Intercoastal do such a good business catering to their clients’ every need; they provide an exceptionally enjoyable experience in a great part of the country. It’s pretty much the ideal way for a noob such as yours truly to experience his first duck hunt. Once the decoys were in place and the blind was set up, we settled in to, well, wait. We twied to be vewwy vewwy, quiet. If you book a hunt with a first class outfitter like Intercoastal, you’re not exactly roughing it out there. Once we sat down in our camo-bedecked camp chairs to wait for some airborne activity, out came the hot coffee, breakfast sandwiches, and orange juice.

It was a picture postcard, crystal-clear coastal morning. We sat back and watched gulls and cormorants circle overhead while dolphins played in the water below. The only thing working against us was the fact that we were out there on only the third day of the season, and the southward migration had gotten off to a slow start this year due to some unusually warm weather up north. Stephen had gotten good reports from Georgia and Arkansas; plenty of southbound traffic was heading our way. But those birds were still a couple of days out from our coastal location. So the ducks we saw that day were the early birds, so to speak. That’s not to say we didn’t enjoy the wait. There probably isn’t a more beautiful spot to post up and take in the sunrise and all the air and sea life. Not to mention that Naval Air Station Pensacola was just visible on the horizon to our northeast, so we had front row seats for the Blue Angels’ morning workout.

And when the birds finally came in, they came in fast. Sporting clays is a blast, but it doesn’t really prepare you for the speed or unpredicablity — the fun, really — of the real things. So when a tightly grouped formation of four winged targets made a left-to-right pass about 20 yards in front of us, I aimed my Remington V3 Field Sport for the lead bird.

And I hit the trailer. I blame that on my left-eye dominance…that’s my story and I’m sticking to it. I’d left my two Labs at home in Austin, where I’m sure they were fast asleep in my bed. Aaron was kind enough to wade out and retrieve the bird for me before I could even take a step toward the water. While the area may be known for buffleheads, blue bills and redheads, the quacker I’d bagged was a merganser. By about 9:00 a.m., we’d seen all the activity we were going to see that morning. It was time to pack up the decoys and gear and head back. If you’re savvy enough to book a duck hunt (or hog hunt or fishing trip, for that matter) with Intercoastal Safaris for yourself or a group of your friends, once you’re back at the dock, they’ll clean your birds for you. And your guns. And pack the meat in ice in your coolers…all while you tuck into breakfast or bend an elbow next door at the Flora-Bama Ole River Bar.

Or you can mosey across the street to the…wait for it…Flora-Bama Lounge and Oyster Bar, possibly the world’s only bar/restaurant/honky-tonk/store/watering hole/roadhouse/church. Yes, church.

Anyway, if there’s a better place for your first duck hunt, it’s hard to imagine where that would be. Unlike shooting deer, I think this duck hunting thing might have stuck. Now I just need to do something about the itch I’ve had for a pheasant hunt.

This article was originally published in 2016.