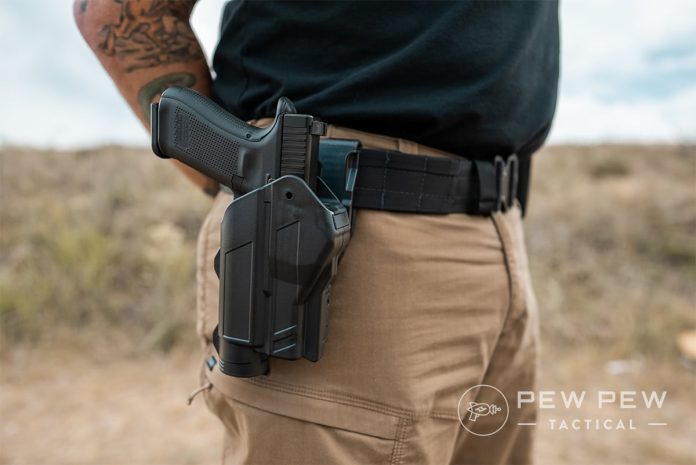 In particular, Suddaby said that the state could not make people disclose social media account names or handles, nor could they compel them to list every person in their household.

Further, Suddaby wrote that applicants should not have to prove “good moral character” and that the provisions are “unprecedented constitutional violations.”

In the 182-page order, the judge also removed portions of New York’s “sensitive places” that prohibited carrying a gun even with a license. He ordered that the state cannot ban firearms in places like theaters, bars, restaurants, parks, and other public places.

Finally, he halted an order that would make it a felony to have a gun on private property without the property owner’s express permission.

The suspension comes after New York enacted a flurry of new gun laws on the heels of the Supreme Court’s decision in Bruen vs. NYSRPA.

(Want to learn more about SCOTUS’ decision: check out our article on the Bruen v. NYSRPA.)

Gun rights groups pushed back at the new laws calling them unconstitutional, and vowed to fight against the new legislation.

In a statement posted to Gun Owners of America, Senior Vice President of GOA Erich Pratt warned New York politicians to “fall in line” with Bruen.

“Just like we warned politicians after the Bruen decision, fall in line, or we will force you to. We are excited to see Kathy Hochul finally served a plate of humble pie, and we are fully prepared to continue the fight should she again attempt to disarm the citizens of her state at a time when her party’s policies are only escalating the danger that everyday citizens face.”

New York Governor Kathy Hochul and Attorney General Letitia James have not commented on the injunction.

Despite tough times economically, Americans are still heading to the gun store, at least according to the most recent data from federal background checks.

The National Shooting Sports Foundation sifted through the data, removed rechecks and checks for things like carry permits, and whittled that number down to 1,427,264 checks for sales.

This marks the 38th consecutive month gun sales have pushed past the 1 million mark.

After Delaware Gov. John Carney announced several new gun control bills this past summer, gun rights groups pledged to challenge them in court, and they are making good on that promise.

Less than four months after the bills were signed, lawsuits have poured in challenging the new restrictions in court.

The Delaware State Sportsmen’s Association is the latest to join the brawl, filing a suit in the Delaware Chancery Court against a provision that prohibits those under 21 from possessing most firearms, outside of shotguns for hunting.

In its challenge, the Delaware State Sportsmen’s Association uses the Bruen decision to state that the U.S. Supreme Court has upheld the right to keep and bear arms.

It goes on to say that the current provision “flouts the fundamental civil rights of Delawareans, particularly those 18 years-old through 20 years-old, by making them criminals — felons — for exercising one of their most exalted rights.”

It also argues the new law goes against the Delaware Constitution, which allows for “the right to keep and bear arms for the defense of self, family, home and state, and for hunting and recreational use.’’

This lawsuit coincides with others from gun rights groups challenging AR-15 and high-capacity magazine bans.

Legislators pointed to two mass shootings – one in Uvalde, Texas, and the other in Buffalo, New York – as the reasons behind the new gun laws.

“Like most rights, the rights afforded by the Second Amendment are not unlimited,’’ Traci Manza Murphy, executive director of the Delaware Coalition Against Gun Violence, told WHYY.

“Courts have upheld laws again and again that place reasonable limits on who can own firearms. The newest suit aims to dismantle a bill aimed at limiting access to firearms for the youngest adults, whose brains are not fully developed,’’ she concluded.

But gun rights activists say the new provisions don’t protect; instead, they infringe.

“If you’re 18, you can get married. You can buy a house. You can be living on your own. But according to this, you can’t own anything other than a shotgun or muzzleloader for protection.”

The state has yet to respond to the allegations.