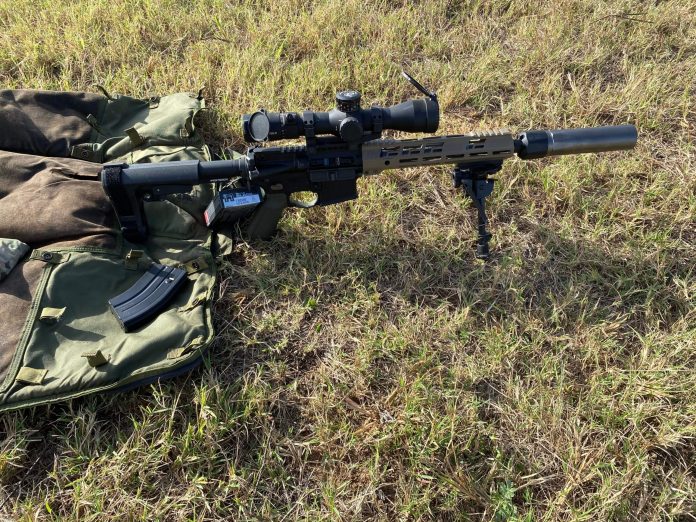 We finally wrapped up our Primary Arms pistol lower build, out of all the orphan parts. We had a lot of fun completely disregarding color schemes as we perused the sale pages and bought whatever was in stock. Which ended us with a 2A lower, radian safety, mag pul grip, and an AR Gold Trigger. Oh, and a CMMG RipBrace since this was a pistol configuration, one of my favorite parts to hit the market this year. So finally, we can get to the point. And the point was to make a 7.62×39 pistol from AR parts.

Why, exactly, would you want that? For starters, because we can. Also, because on paper such a gun has a lot of advantages. I have been very wary of x39 AR’s in the past, but in theory, it provides a lot of benefits. If it works, which is a big if. Having been told over the last year by several people that the science had now been perfected, I wanted to see for myself. And for you, cause I like you guys.

Prior to Uncle Joe causing a run on steel case ammo, imported x39 was dirt cheap. Prior to 2020, steel case x39 was cheaper than brass 5.56, but not by a huge margin. Maybe 5 cents per round, not enough to interest me in an additional caliber. During the course of the Plandemic, however, we saw steel case remain roughly the same while brass 5.56 skyrocketed. I bought a gaggle of x39 at like .33 cpr, when brass 5.56 was not only .75 cpr, but very hard to find. I was planning not only on my CMMG Mk 47 arriving but for this project we are working on today.

What benefits does a commie round theoretically offer? First, out of a short barrel, it still packs enough punch to get the job done. Which is why we built a pistol. 5.56 does most of its wounding via velocity, and it suffers badly from shortening the barrel. We could debate the lethality of 5.56 vs 7.62×39 from a 16-inch gun and both be right. From a shorty, hands down 5.56 sucks. This is why I normally recommend a 300 AAC for pistols. However, at $1 a round pre-pandemic and “firstborn plus an eye” price right now, that isn’t really great. While 7.62x 39 might not have all the easily suppressed subsonic options of 300 AAC, in supersonic loadings they are roughly equal.

The second reason to want this set up is all the new gun owners or the idea that you might want to have a “just one, all jobs” gun in the future. Before I could recommend a 5.56 pistol for training, with a 300 AAC upper you slap on for real-world use. Given the price of both, that is not the best investment strategy right now. If our x39 upper works, not only could a new gun owner get a reliable and lethal piece, they could afford to train with it. Which is important. And you, in a pinch, could carry just one upper/mag/ammo combo and do anything that needs doing.

The third reason is our old pal Thomas Gomez. Doctor (of backyard science) Gomez first turned me on to the idea that 7.62×39 is a reasonably accurate round a few years back. And while I never did manage to get a Howa Mini Action, the idea stuck with me. Gomez has found that several variants of “garbage” import steel cases actually reliably shoot 1.5 to 1.75 MOA. That isn’t going to win at Camp Perry, but it is light years better than I would have expected. If the gun can match, that is actually better than a US Army M-4 is required to do.

Building a Commie Round AR required some further development. First and foremost, hat tip to C Products Duramag and Gun Mag Warehouse for providing them. A lot of digging prior to our complete gun led me to believe that only DuraMag had mastered the geometry required to get a tapered case like this to work reliably in an AR style magazine. They have done some serious engineering work on this one, and I am impressed. More on that in a bit.

That isn’t the only problem with an x39 AR. You also have the feed ramp inherent to the Stoner design not liking Commie food, and the bolt face being an odd size. Not to mention buffer weights and gas pressures. So we turned to an expert, Craddock Precision. Craddock Precision is who I normally turn to when we have a precision project in mind. They have built us amazing uppers in the past, including the very first 224 Valkyrie in history to get 1-mile hits. Recently, they also crafted us a 6.5 Creedmoor pistol. Craddock Precision is the King of Precise for my money, hands down.

This being a highly questionable pistol build for a not surgically precise bullet, they actually were not my first choice. I mentioned I was slapping one together to Paul almost in passing, to which he responded that they had built hundreds of them. Record scratch, wait what? It turns out that in addition to all the other long-range magic they do, Craddock Precision had an unadvertised 7.62×39 upper side project going for years. Would I like some expert opinion instead of groping around in dark using clearance sale components? Yes. Yes, I would.

Talking it over, we opted for an 11-inch barrel. 11 hits the sweet spot of being short overall but keeping optimal velocity for this caliber. This also allows the utilization of an in-house developed special length gas system, to enhance reliability. Even if you buy just the barrel from them, they send the gas tube. (Barrel MSRP $285.) This also means you can run this upper with a standard weight pistol buffer, and not have to monkey around on that end of the gun. An all-stainless precision-cut 1:10 twist bead blasted barrel is the heart of the system. We opted for a new Delta S handguard, a lightweight but durable and functional component.

Accuracy, which Craddock is known for, is off the charts for this caliber. We tested initially using Hornady Black 123 Grain SST, which helps in that equation. With 2 sighters, the Craddock upper printed a 5 round .6 MOA 100-meter group. That is to say, with 7 rounds down the barrel, two of which were for scope adjustments, we were very near ½ MOA accuracy. Of the 5 in the group, the last 3 were in such a small cluster I wouldn’t even type the number. Rather than chasing small groups with a pistol, we swapped over to the steel case. The Craddock upper kept Red Army Standard to 1.25 inches, which is borderline absurd.

And yes, it will run fast too. We grouped with a suppressor on, which gave us a bit of back pressure. When I took the can off, we did have to swap buffers. But with the buffer weight problem solved, this gun runs like the wind. If you have some steel case laying around, or are still shocked at the price of 5.56, this is an excellent option.

What Happened to the Sig Sauer 556?

Is Russia’s Nuclear About-Face More or Less Credible Than Its Earlier Threats?