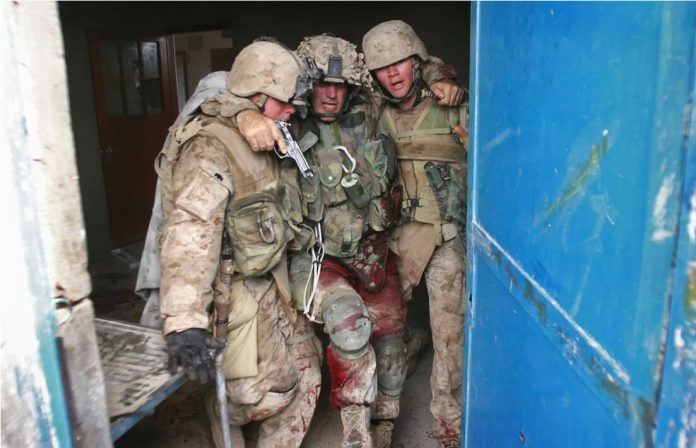 In the winter of 2004 a joint US, Iraqi, and British operation kicked off in Iraq. Local forces called it Operation Al-Fajr. Allied troops titled it Operation Phantom Fury. The world came to know this simply epic scrap as the Second Battle of Fallujah.

Fallujah was a typical Middle Eastern craphole located in the Al Anbar Province some 43 miles West of Baghdad on the Euphrates River. The area has been occupied since the days of Nebuchadnezzar. By 2011 more than a quarter-million Iraqis called Fallujah home. Within Iraq, Fallujah was called the “City of Mosques” for its 500 houses of Islamic worship. In 2004 Fallujah was an understudy for hell.

The party started in April of that year during the aptly-named First Battle of Fallujah. In this fight, coalition forces moved into the city to kill or capture insurgents responsible for the violent deaths of an American Blackwater security team. Once Allied forces seized the city they turned over control to an Iraqi government security force.

It was tough to figure out who the Bad Guys really were in Fallujah, Iraq, in 2004. Between April and November, enemy forces fortified the place. Insurgents and fanatical foreign Islamist fighters flowed toward Fallujah like zombies after fresh brains. The scene was set for Something Truly Horrible. The Second Battle of Fallujah was to be the first major engagement of the war fought solely against insurgents rather than the previous Iraqi Ba’athist government forces. The end result was to become the bloodiest fight of the Iraq War.

The alpha villain in Fallujah was one Abu Musab al-Zarqawi. Al-Zarqawi was one serious piece of work. Originally born in Jordan, al-Zarqawi ran a terrorist training camp in Afghanistan before moving his corporate headquarters to Iraq. His repertoire included suicide bombings, hostage takings, and the errant ritual beheading. His stated goal was to transform an insurgency against coalition forces into a full-blown Shia-Sunni civil war. His followers called him the ”Sheikh of Slaughterers.” Al-Zarqawi was the agent of chaos and a simply despicable human being.

Coalition forces established roadblocks around Fallujah that prevented insurgents from escaping while excluding fresh scum from infiltrating into the city. For the hard-core Islamists in the city, this was to be a come-as-you-are fight. The joint coalition force was comprised primarily of US Marines alongside some 1,500 US Army combat troops supported by extensive air and ground assets as well as Iraqi combat forces. The 1st Battalion of the British Black Watch assisted with the encirclement.

Entrenched within the city were between 1,500 and 3,000 hardline extremists. These freaking lunatics included Filipinos, Chechens, Saudis, Libyans, Syrians, and native Iraqis all united in their hatred of America. On November 7, 2004, Navy SEAL and Marine Force Recon snipers kicked off the party along with some 2,500 rounds of 155mm high explosive artillery. This was to be an old school fight.

There was no shortage of valor to be found among coalition forces as they stormed into Fallujah. US forces ably employed M1 tanks and Bradley Infantry Fighting Vehicles. Air assets included AC130 gunships, B52’s, F15’s, F16’s, and A10’s. UAV’s and a U2 Dragon Lady reconnaissance aircraft kept an eye on things as the fight unfolded. However, this was a city. The only way to take a fortified built-up area is to get out of your vehicles and just go hunting.

One particularly bloody engagement has become known as Hell House. The dwelling was two stories built around a central atrium with a skylight and multi-tiered stairwell. Bedrooms, bathrooms, and a kitchen surrounded this central space. In better times it would have been a nice place to raise a family. On this day the insurgents had transformed it into a deathtrap.

While the insurgents were little more than fanatical cavemen, they weren’t stupid. They had established firing points on the second-floor landing overlooking the interior of the building. Surrounding structures were too low to establish a viable overwatch for snipers or machine gunners. Their well-reasoned defenses had already pinned down eight Marines inside, six of whom were badly wounded.

1SG Brad Kasal and PFC Alex Nicoll moved into the house in an effort at extricating wounded US troops. Checking a doorway underneath the stairs Kasal discovered an insurgent hiding. The Islamist fighter fired a burst from a stubby cut-down AK and missed. Kasal shoved the muzzle of his M16A4 into the man’s chest and cut him down at contact range. Then the entire world exploded.

1SG Kasal was shot several times in the legs. His comrade was caught out in the open and wounded even more severely. 1SG Kasal dragged PFC Nicoll into a bathroom to get out of the line of fire.

One proper stud named Corporal RJ Mitchell was already in a 1st-floor bedroom tending to the wounded. He braved the kill zone in the atrium to reach the bathroom where Kasal and Nicoll were holed up. In the process, he was hit in the leg. The insurgents on the top floor dropped in grenades that liberally peppered the three Marines with shrapnel. 1SG Kasal caught the brunt of one when he threw his body over PFC Nicoll to shield him from the blast.

CPL Mitchell and his wounded comrades found themselves in a seriously bad situation. PFC Nicoll was bleeding out, and 1SG Kasal was struggling to remain conscious in the face of multiple wounds. Mitchell put a tourniquet on Nicoll’s shattered leg and improvised the same thing for 1SG Kasal out of his low-ride thigh holster. Holding his improvised tourniquet in one hand and his Beretta M9 service pistol in the other, 1SG Kasal directed CPL Mitchell to find a way out.

1LT Grapes, the local ground force commander, battered his way through a barred window with a sledgehammer to get into one of the bedrooms. The resulting opening was so small he had to remove his helmet and body armor to gain access. Replacing his gear once inside, Grapes and his men coordinated a proper rescue from within the structure.

Two of Grapes’ Marines ran the gauntlet through the atrium to reach the bathroom where Kasal, Nicoll, and Mitchell were trapped. They improvised a stretcher out of a poncho to retrieve Nicoll and took Kasal under the arms to get him out of the building. Mitchell hobbled out under his own power. Marines on the far side of the dwelling finally beat through the walls to rescue the remaining Marines trapped in other rooms.

An embedded reporter named Lucian Read shot a series of iconic photographs during the fight for Hell House that captured the powerful drama that had occurred there. His shot of 1SG Kasal being carried out of the building with his M9 became one of the most famous images of the war. Once his Marines were clear 1LT Grapes leveled the building with satchel charges.

Once the dust settled, Grapes and his men returned to retrieve any sensitive equipment that might have been lost during the fighting. When they approached the collapsed building an insurgent trapped inside deployed a grenade unexpectedly. The Marines leaped clear as the device exploded. 1LT Grapes then ran up to the wounded Islamist fighter and shot him fifteen times in the head. It had been a hard day for all involved.

The Beretta M9 is the official designation of the Model 92FS handgun adopted in 1985 as a replacement for the original M1911A1 .45. A short-recoil semiautomatic single-action/double-action design, the M9 is typical of the so-called “wondernine” pistols of the day. The M9 feeds from a 15-round double-column, single-feed box magazine.

The M9 was known to suffer slide failures at extreme round counts, and the design was modified to prevent this after deployment. The M9 was the least respected weapon in the US small arms arsenal according to a post-combat survey conducted by the military. Most of the M9’s reliability problems could ultimately be traced to sketchy aftermarket magazines. The M9 is currently being replaced throughout the military by the SIG SAUER M17 and M18 handguns.

1LT Grapes eventually left the Marine Corps to serve as headmaster for a Catholic High School for boys in Virginia. CPL Mitchell left the Marine Corps the following year to study Mechanical Engineering at Arizona State. He eventually took a job as a gas turbine engineer at a utility company. PFC Nicoll lost his left leg but survived. The image of a shattered 1SG Kasal emerging from the doorway to Hell House, his legs drenched in blood and his M9 safely gripped in his right hand, was eventually transformed into a bronze memorial.

By the time 1SG Kasal reached a medical facility, it was estimated that he had lost some 60% of his blood volume. 1SG Kasal caught seven 7.62x39mm rounds to his legs along with 44 pieces of shrapnel. He underwent 21 different surgeries and lost four inches’ worth of bone in his right leg. Nowadays he is said to walk with a limp.

1SG Kasal was promoted to Sergeant Major and served with distinction in a variety of combat roles for another eleven years. He retired after 34 years of service as Sergeant Major of the First Marine Expeditionary Force. According to his Linked-In page, he teaches Marine Corps Junior ROTC at the Basic Academy of International Studies in Los Angeles today. I suspect those kids get their money’s worth.

On June 7, 2006, two F16C fighter jets approached a safe house north of Baqubah, Iraq. The lead plane dropped a pair of guided 500-pound bombs and utterly flattened the structure. Abu Musab Al-Zarqawi was blown straight to hell along with five of his reprobate associates. It was a fitting end for such an evil mob.

Learning to Shoot a Handgun with a Red Dot: Simple but not Easy