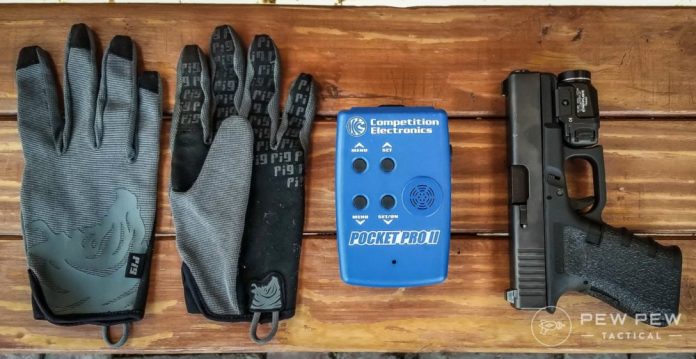 Obviously, we all look like we could be in John Wick when we shoot — slinging rounds as fast as our finger can pull the trigger, each round in the 10-ring.

But how fast are you really?

The easy way to find out is with a shot timer.

No, not your buddy using a stopwatch. Even though your buddy has undoubtedly incredible reflexes, he/she can’t compete with the accuracy of a shot timer.

Shot timers are a must-have range tool to develop speed. They provide a quantifiable metric (time) to measure your progress.

Want to learn more about shot timers? You’re in luck!

We’ll give you some insight into when to use them, types of timers, and a drill to try at the range.

By the end of this article, you’ll have a better understanding of shot timers and how to use them when you train.

Let’s get down to business.

Shot Timers: Should I Get One?

First, shot timers are a tool for those already proficient in the safe operation of their weapons.

That doesn’t mean you know how to load and shoot the thing; it means you’re comfortable with immediate action and remedial actions in the case of malfunctions.

It means you have a smooth draw from the holster and have practiced your transition from rifle to pistol to the point that the mechanics of the movements are instinct.

If you’re not there, that’s okay. That’s great that you recognize it. If you’re still fumbling with the draw, trying to do it faster is not the safe option.

Keep working the basics until you are comfortable, and then add the timer.

The timer, for whatever reason in our brain, immediately adds an element of stress and the idea that you must go faster, faster, faster.

That’s not the way to learn how to draw from a holster, and accidents happen if you add speed before the basics are mastered.

Now, if you feel comfortable with weapon manipulation, engaging multiple targets, or whatever drill you want to time, then, yes, it’s time to buy.

Add the stress, get data points, and continue to progress through your journey to John Wick status.

So, you’re ready to spend yet another Benjamin on an already expensive hobby.

I live by the “Buy Once, Cry Once” mantra when it comes to shooting. It’s better to spend more money on the product you want rather than buying something cheaper that you’ll outgrow in a few months.

With that in mind, let’s look at the best options out there for shot timers.

The Pact Club Shot Timer III comes in a nice, ergonomic form with rounded edges. It comfortably fits in your hand.

Using it is very intuitive and consists of a “go” button, “review” button, and scrolling arrows.

It stores your last 100 shots and features instant and random delayed timer functions — the buzzer is delayed between 2 and 3.5 seconds, which is incredibly handy if using it without a buddy to time you.

It’s worth noting that the sensitivity adjustment is not easily accessible or intuitive. Adjustments are made via a screw located under the battery and without indication if you’re increasing or decreasing the sensitivity.

Full disclosure, the PACT Timer I used for this article was borrowed from a friend who had purchased it from a friend. It had a few issues – namely, a small slip of paper had to be inserted under the battery to turn it on, and the buttons wouldn’t always work.

Not a great start to the day.

Luckily for me, a nice Air Force JTAC who happened to be at the range let me borrow his PACT.
It functioned flawlessly! And it was easy to use.

My new range friend mentioned he used the PACT heavily. Despite that, it still had the original battery from when he purchased it around 2016 — pretty darn impressive!

Depending on your requirements, this timer covers about 90% of what you may need and does so very simply. The instructions are easily found online.

The Pocket Pro II is the timer I personally own. Physically, it’s just slightly smaller than the PACT but a bit more box-like.

The Pocket Pro II uses four buttons to control the features — Set/On (Down), Set (Up), Menu (Down), Menu (Up), and the GO button. The Go button is unlabeled and on the side of the device, away from the other four buttons.

Editor’s Note: Unfortunately, the Pocket Pro Timer II has been discontinued…, but Competition Electronics has a few other models available.

The Pocket Pro offers a separate shot sensor and buzzer and displays time to 199.99 seconds. It operates on a single 9-volt battery and allows you to review up to 50 shots — forward or reverse.

What do you think of the Pocket Pro Timer? Rate it below!

There is another option out there, and you already own the hardware for it…quite a few shot timers exist for smartphones.

But, to be straight with you, I don’t like them. It’s not convenient to put my phone on a table or in my pocket after hitting go.

I think it’s much easier for a timer to hang off my belt or a pocket via belt clips. This makes it a lot simpler move.

I also like the actual tactile go button on the timers…I don’t have to look down to find it. I can get in my ready stance and reach down to find the button instead of fumbling with my phone.

The apps tend to work OK, but remember you’re using a phone, not a shot timer.

Having the phone on you during a drill also opens you up to distraction if your phone starts ringing or you get a text.

I’d rather have a purpose-built timer, but some prefer to use what they already have on hand. If that’s you, then a smartphone app can work.

How to Train with a Shot Timer

Ok, you’ve got your shot timer; what do you do with it?

I recommend starting with the basics

You get the idea…

Once you’re used to drawing and firing while on the clock, you can move on to other drills. One of my favorites to work on starts with an unloaded rifle at the low ready, a holstered pistol with one round in the chamber, an empty mag in the mag well, and a second mag with two rounds either on your belt in a pouch, pocket, etc.

At the beep, attempt to fire the rifle — which should be a dry fire for this specific drill if you prepared your rifle correctly.

Transition to your pistol and fire one well-aimed shot. Slide-lock-reload and fire your remaining two rounds.

There are many moving parts there, but you get to practice transition/drawing, slide-lock-reloads, and staying in the fight despite multiple systems not firing when you expect them to.

Want a good timer drill? Check out the Brownells Daily Defense video below!

Shot timers are a great way to add a little stress to your training and shake up range days.

Make sure you’re good on the fundamentals first before adding this to your training regimen.

While you can opt for a smartphone app, a dedicated shot timer like the PACT or Pocket Pro II improves the experience, in my opinion.

What model shot timer do you use? Let me know in the comments below. Ready to add some more drills to range day but short on ammo? Check out our recommendations on the best Low Round Count Range Drills.

The Best Outdoor Activities for Survivalists to Stave Off Boredom

Not to be left ‘behind’: Advocates hopeful NDAA will mandate a Space Guard

The Tide Is Turning Against ‘Woke Capitalism’