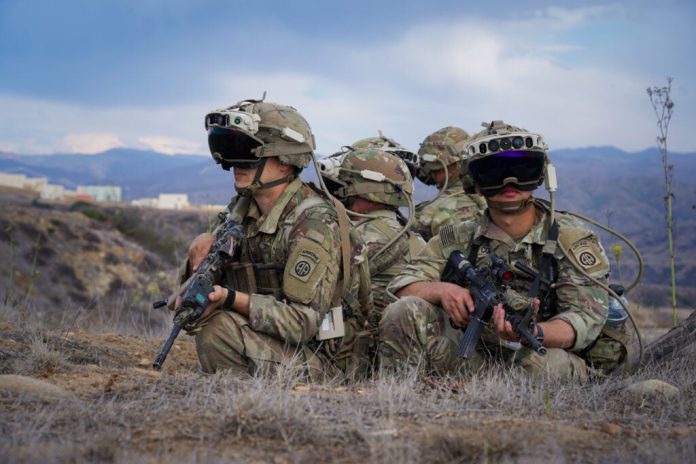 U.S. Soldiers, assigned to 82nd Airborne 3rd Brigade Combat Team, train with the Integrated Visual Augmentation System as a part of Project Convergence 2022 (PC22) at Camp Talega, California, Oct. 11, 2022. During PC22 many systems will be tested to determine how future command and control capabilities can be integrated with all-service multi-national partners (U.S. Army photo by Sgt. Thiem Huynh)

FT. IRWIN, Cali. — The British and Australian military are taking notes from this year’s Project Convergence to see how their own programs and soldiers can benefit from the annual sensor-to-shooter experiments, meant to build out the Pentagon’s broader Joint All Domain Command and Control (JADC2) effort.

“Warfighting in the future is going to require collaboration, we’re going to need to collaborate across countries, but also across domains and across technology,” Alex Chalk, UK’s minister for defence procurement, told reporters Wednesday. “This is all about making that happen.”

Officials from both the United Kingdom and Australia took part in this year’s experiment for the first time, bringing their own technologies alongside the US Army to test across the past few months. The British Army brought over 450 soldiers and 20 scientists and engineers from its Defence Science and Technology Laboratory, while 110 Australian soldiers took part in the experiments.

According to a handout given to reporters at the scenario bravo demonstration and a press release from the UK government, the following technologies from the British and Australian military were tested (not all of the technologies were listed):

Maj. Gen. Sharon Nesmith, deputy chief of the UK general staff, told reporters the experiments served as a “brilliant demonstration of how the British Army is seeking to modernize,” specifically when it comes to Future Soldier, the UK’s program to develop its Army of the future that Nesmith called the “most significant transformation program” of the last few decades.

“And of course, modernization is at the heart of that transformation program,” she said. “And if we want to be more nimble, agile, and more expeditionary, we need to be able to test ourselves and inform that modernization program. So what we’ve taken from Project Convergence is a fantastic opportunity to do that alongside our partners and our allies. We learn from each other, we share our thinking, we’ll be better for it, you know, we’ll be better for it today and better for it tomorrow when we have to fight alongside each other.”

Australian Army Brig. Gen. Warren Gould, director of general systems and integration, added that one of the most successful missions he saw during scenario bravo was a demonstration that involved relaying targeting information from US sensors to Australia.

“And doing that electronically for the first time, with humans in the loop, but providing that information flow all the way into Australia, that led to a live fire mission in Australia, which was an outstanding first for us,” Gould said.