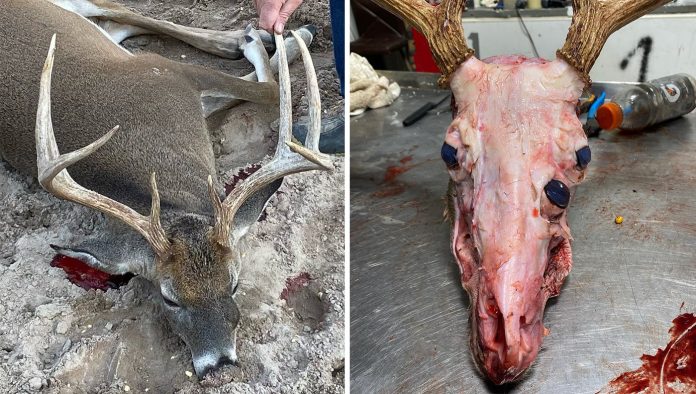 What do you call blind buck? Right. No-eyed deer. But this buck was blind in only one eye. He could see perfectly well with the other…two. What we have here is a three-eyed deer.

On November 9th, Jon Wilson of Double Nickel Taxidermy in New Braunfels, Texas, posted a picture of the buck’s caped-out skull, which clearly shows an extra eyeball on the left side of the deer’s face. “Never have I ever…seen a deer with 3 eyes!” he wrote. “What seemed to be an abscess at first was later revealed to be a fully formed eye under the skin! This will be a surprise to the hunter! [N]ature sure is amazing!”

Double Nickel Taxidermy’s Facebook followers were earger to see a field photo of the buck, and Wilson obliged. In it, you can see that the deer looks normal enough, with the exception of a large bump on its left cheek. “We have skinned thousands if not tens of thousands of deer over the years. Typically a lump under the skin is simply an abscess or maybe even a broken off piece of antler from fighting with another deer that healed over,” Wilson told F&S. “This is definitely the weirdest thing we have seen.”

It didn’t take long for the “eye” jokes to start rolling in. (“Eye’ve seen it all now,” said Lynette Best Gray.) And there were a plenty of Chernobyl and Third Eye Blind references. But mainly, people wanted to know if the taxidermy mount would show off that third eye. It would be “a conversation piece of a lifetime!” said Dixie Dawn. That the hunter is getting a skull mount of the buck disappointed a few commenters, but they can take some consolation in the fact that the third eye socket should be plain to see on the bleached skull.

“We are fortunate to get to mount lots of unique animals from all over the world,” said Wilson. “But this one definitely takes the cake. Tough to say what would come in second to this, but we have seen a mule-shoed hog, albino, melanistic, and leucistic animals, and three hooves on one foot to name a few. As for this one, disbelief would probably sum up our reaction the best.”