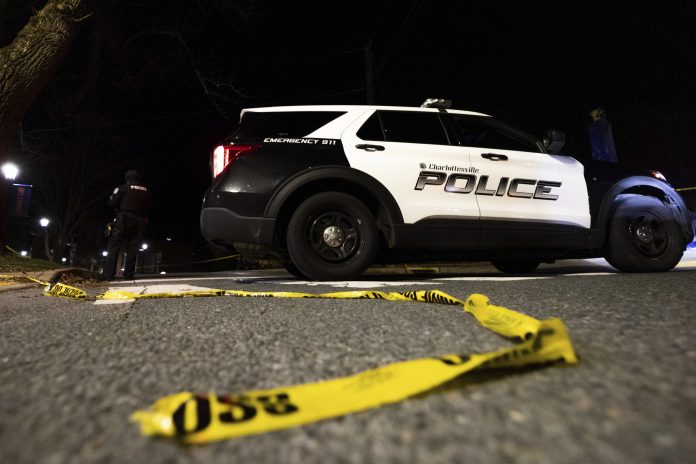 No one is really sure why three people were shot to death and two more were wounded in a University of Viriginia parking garage last night. The university has a policy which clearly prohibits firearms. That really should have been more than enough to keep anyone from bringing a gun onto the school’s beautiful campus.

And yet Christopher Darnell Jones, a former UVA football player, is suspected of not only bringing a gun on campus, but opening fire and murdering three people. The reason for what happened isn’t yet known.

The UVA Police Department is looking for Christopher Darnell Jones regarding the shooting incident that occurred on the grounds of the University of Virginia. Call 911 if seen, do not approach. pic.twitter.com/mKcxF6ksxw

The university sent word out that an “active attacker firearm” was endangering lives on the UVA campus. From the Associated Press . . .

The university’s emergency management issued an alert on Sunday night notifying the campus community of an “active attacker firearm.” The message warned students to shelter in place following a report of shots fired on Culbreth Road on the northern outskirts of campus. Classes were canceled Monday.

The UVA Police Department posted a notice online saying multiple police agencies including the state police were searching for a suspect who was considered “armed and dangerous.”

In his letter to campus, the university president said Jones was suspected to have committed the shooting. The campus emergency management twitter account said that he was believed to be wearing blue jeans and a burgundy jacket and driving a black SUV with Virginia tags.

The gun control industry wasted no time in issuing its prescriptions for preventing future shootings in university “gun-free” zones.

Six hundred? They’re obviously just making it up as they go along now.

The fact that the motive, the firearm and the circumstances behind the UVA shooting haven’t been determined yet, let alone reported, obviously makes no difference at all. Jones likely used a handgun, not an “assault weapon” but that isn’t yet known. People like Volsky, however, don’t give a damn. He also has no idea how Jones got whatever firearm he used, so there’s zero evidence yet that he didn’t undergo a background check.

As for “community investment” — whatever that means — we’re eagerly awaiting clarification from Volsky as to how throwing more cash at who-knows-what perceived societal iniquity would have made any difference at all in preventing what happened last night in Charlottesville.

The Civilian Disarmament Industrial Complex stands for one thing and one thing only. They want average citizens disarmed, whatever it takes. That’s why they toss out nonsense like this in the aftermath of a murder without knowing anything about what happened or why.

Their responses are always the same, no matter the circumstances. More gun control laws along with more bans and more prohibitions. That’s they square policy peg they try to ram into every round news hold they find when a high profile crime is committed with a gun.

USAF to Unveil B-21 Stealth Bomber in December