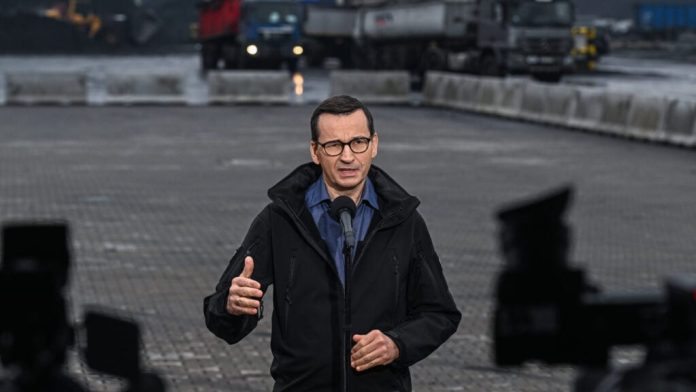 Poland’s Prime Minister Mateusz Morawiecki delivers a statement to the press after chairing the coal committee at the Gdansk Port on October 22, 2022 in Gdansk, Poland. (Photo by Omar Marques/Getty Images)

WASHINGTON — Explosions in Poland that appear to have killed two Polish civilians sent shock waves through Western capitals today, with some reports pointing the finger at Russian weapons — a potential major escalation of a war that has, so far, not drawn NATO nations directly into the conflict.

However, analysts were quick to point out that information is still to come, and that even if Russia was responsible for what may be missile strikes into Poland, it would not necessarily lead to an invocation of NATO’s Article 5 and the specter of a NATO-Russian war.

Local reports from Poland about the explosions, including social media posts that appeared to show the damage in a small town in eastern Poland, began circulating around 1 p.m. Eastern time. The Polish government has yet to make a public statement attributing the explosions, but they came amid a Russian missile barrage targeting Ukrainian cities. Poland’s national security council was reportedly convening an emergency session on the “crisis situation.”

The Associated Press, citing a senior US intelligence official, reported that the US assessed the missiles were Russian. The Pentagon, for its part, told reporters this afternoon that it did not have “any information at this time to corroborate those reports and are looking into this further.” A White House National Security Council spokeswoman tweeted, “We’ve seen these reports out of Poland and are working with the Polish government to gather more information. We cannot confirm the reports or any of the details at this time. We will determine what happened and what the appropriate next steps would be.”

Beyond the potential for a purposeful Russian strike, there’s the possibility that the strike was unintentional, or, as suggested by some defense observers online, could involve errant air defense munitions or pieces of a weapon that was intercepted mid-air.

For Latvia’s defense minister Artis Pabriks, there was little question of blame, as he tweeted, “My condolences to our Polish brothers in arms. Criminal Russian regime fired missiles which target not only Ukrainian civilians but also landed on NATO territory in Poland. Latvia fully stands with Polish friends and condemns this crime.”

The Estonian government said it was ready to stand with its NATO allies. “Latest news from Poland is most concerning,” the foreign ministry tweeted. “We are consulting closely with Poland and other Allies. Estonia is ready to defend every inch of NATO territory. We’re in full solidarity with our close ally Poland.”

The Russian defense ministry reportedly suggested on its Telegram channel that the claims of Russian strikes in Poland was a “deliberate provocation in order to escalate the situation.” Tass, a state-run Russian news outlet, quoted a spokesman saying that “Russian military has conducted no strikes at targets close to the Ukrainian-Polish state border.”

A Russian strike into Poland would constitute a violation of NATO territory and, on paper, could be grounds for Poland to invoke the alliance’s Article 5 request for military aid — essentially creating a worst case scenario many have feared since Russia’s invasion of Ukraine began in February, with a full-scale conflict between Moscow and the 30 allied nations.

However, Poland does not automatically have to invoke Article 5, and would likely be encouraged by the White House and other NATO nations to seek other options, especially if it become clear the strike was an accident and Russia was willing to make an apology to avoid full-scale conflict. The Biden administration has crafted its Ukraine policies specifically to avoid such an escalation.

More likely is the potential that Poland could invoke Article 4 — a lesser-known, but more frequently invoked, part of the NATO bylaws. That would lead to a meeting of NATO members for a “consultation” about the security issue, sending a political message to the world that the alliance stands together, without the full escalation Article 5 brings.

However, invoking either Article 5 or Article 4 would necessitate getting the sign off from all 30 NATO member countries, making either measure unlikely if the missile strike was not premeditated, said Stacie Pettyjohn, director of the defense program at the Center for a New American Security.

“From the early reporting that we’ve seen, which is still a bit hazy, it seems like this was probably an accident. And it may have been some errant surface-to-air missiles that Russia had fired at ground targets — so using them for an inappropriate role — that went into Poland. I don’t honestly know if Poland wants to escalate the situation that much either,” she said.

“My assumption is that the [Biden] administration is going to be looking to de-escalate, issue a stern warning, tell Russia that they need to be more careful in the future and take steps to reassure Poland and other NATO members,” she said.

Jim Townsend, a former Pentagon official now also with CNAS, said, “NATO has to proceed very carefully- almost like a prosecutor building a case. They have to have an airtight case — and if they want to proceed, to work to get the votes from all member states… NATO is going to have to be measured, because they don’t want to be victims of jumping to conclusions or bad information. They’ll to see a missile track leaving Russia and landing in Poland — and they’ll want to make sure that even if that track is there, it’s not an errant missile, that there was intent there.”

Another likely outcome, predicted by both Pettyjohn and Townsend, is that the United States and its European allies and partners could double down on missile defense investments or seek to move additional assets to NATO’s eastern flank.

“This will definitely reinforce sort of the feeling that more missile defenses are needed,” Pettyjohn said. “Poland only has a couple of Patriot batteries right now, and they’ve already said they want to buy six more.”

Of note, the Ukraine Defense Contact Group, a semi-regular meeting of defense heads from states involved in supporting Ukraine, is set to meet virtually tomorrow.

The crisis in Poland emerged as the Biden administration announced plans to ask Congress for $37.7 billion in new funding for Ukraine’s aid. The money, which would be planned to last for the remainder of fiscal year 2023, includes $21.7 billion for “equipment for Ukraine, replenishment of Department of Defense stocks, and for continued military, intelligence and other defense support.”

The rest of the money covers $14.5 billion through the State Department and USAID that would cover “critical war time investments,” including food and humanitarian assistance; $626 million for nuclear security support through the Department of Energy; and $900 million through HHS for health care and support services.

“I’ll just note that this request is intended to last through the end of this fiscal year. Previous requests for Ukraine aid have been tied to the length of the continuing resolution,” a senior administration official said during a background call with reporters. “We fully expect this year, in December, Congress will come up with a bipartisan agreement and fund the government for the remainder of the fiscal year, so it makes sense for us to tie this to that timeframe.”

Decide now, what you are willing to do