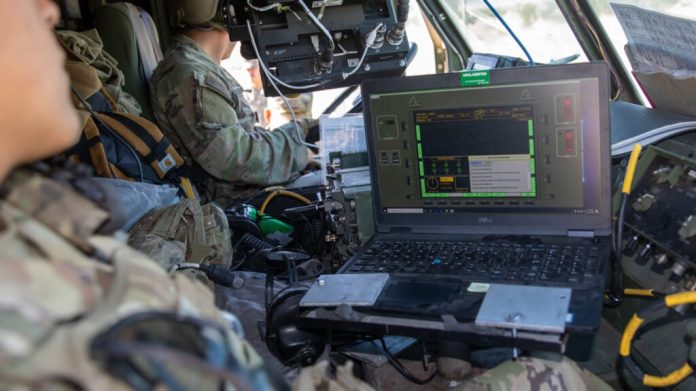 FT. IRWIN, Cali. — In the past, Army leaders have lamented the lack of data on hand and the inability for what information they had to break across stovepipes. Which makes the big finding out of this year’s Project Convergence experiments an ironic one: the service, officials say, now has too much data to work with. And now Army leadership has to figure out how to better manage it before they drown.

Speaking to reporters Nov. 9 at the “Scenario Bravo” demonstration of Project Convergence, an annual experiment meant to build out the Pentagon’s broader Joint All Domain Command and Control (JADC2) effort, Army Secretary Christine Wormuth said “the problem is not a lack of data, you know, we’re now able to tap into a huge volume of data.”

“So a lot of the challenge is going to be figuring out how…we process that as quickly as we can,” she continued. “And I think we did see some real…improvements in terms of how quickly we were able to take information and change it into sort of what I would call more actionable knowledge.”

Wormuth, who has made turning the Army into a data-centric service a top priority, added that she thinks the service can get additional “top down sort of guidance” from the the Office of the Secretary of Defense on how to better standardize data so it’s accessible and shareable across platforms and services, an area that was also highlighted during last year’s experiments.

Along with standardizing data, training commanders to understand the data and not be overwhelmed will be just as important, according to Wormuth.

It’s not just the Army: managing data proved to be an issue across the board for other military services and international partners who took part in this year’s Convergence exercise. Lt. Gen. Clint Hinote, Air Force deputy chief of staff for strategy, integration and requirements, told reporters that he saw “real progress” this year, but there were still issues.

“I’ll start with one of the big problems we identified in this particular scenario, one of the challenges, is going to be [that] we have too much data and we haven’t been able to correlate and fuse it in the way that we want to to provide it to the warfighter,” Hinote said. “A few years ago, we wouldn’t have had that problem because we wouldn’t have been talking to each other and our machines certainly wouldn’t have been talking to each other. And so that’s a huge step forward is the fact that we are all sharing data right now, it’s almost too much.”

Speaking with reporters earlier that day, Lt. Gen. Charles Hamilton, Army deputy chief of staff (G-4), said he wants more than just situational awareness with the data — he wants the data to drive a decision at echelon from the tactical point of contact back to the strategic support area.

“So that was one of the big things that we wanted to get out of this and… it challenged us to look through and work through all that data we’re looking at, to help us not only inform something happened in the past, that’s great, but helping you make the decision for the future that can make sure we maintain that momentum of the maneuver,” he said.

Hamilton, who in his role coordinates logistics policy, said the experiments conducted this year that involved artificial intelligence and machine learning could help in future missions, particularly when it comes to giving options to a commander.

“Because what’s going to happen in the future is that at some point, that machine is going to be so intuitive, it’s not going to make a decision, but it’s going to have the ability to wake me up at two in the morning, and say, we have 20 aircraft on the ground and Scott Air Force Base,” he said. “It has a routine conveyor belt shipment of food going into theaters. It’s going to say, Charles, you got three options…you can down load those 20 aircraft in about five hours…[or] it could say, I’m gonna do a hybrid, I can offload only 10 and put 10…But through machine learning and artificial intelligence is going to give you those options.”

That’s a big difference from how that process is done now, according to Hamilton, who said he’d have to have at least three or four meetings to get to a decision.