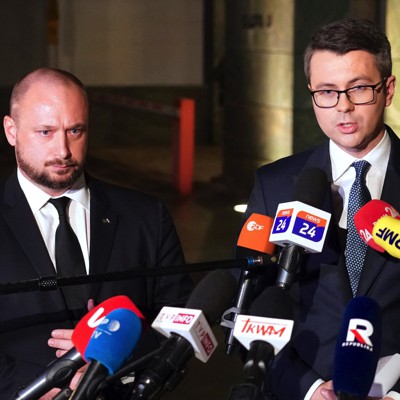 Reports of a “projectile” landing inside Poland amid a heavy barrage of missile strikes on Ukraine are renewing concerns that Russia’s war could spread.

After Polish media reported “that two people died Tuesday afternoon after a projectile struck an area where grain was drying in Przewodów, a Polish village near the border with Ukraine,” the Associated Press reported that “a senior U.S. intelligence official” and “another person” said the projectile was actually a Russian missile.

Russian officials denied it, and a Pentagon spokesman said Tuesday that he couldn’t corroborate or refute the report.

“We are aware of the press reports alleging that two Russian missiles have struck a location inside Poland near the Ukraine border. I can tell you that we don’t have any information at this time to corroborate those reports and are looking into this further,” Defense Press Secretary Brig. Gen. Pat Ryder told reporters at the Pentagon.

Polish officials were holding an emergency meeting to discuss the situation, AP reported. A senior Polish Defense official did not immediately respond to requests for comment.

A Russian strike on the territory of a NATO ally could draw an Article 5 collective military response from the alliance. U.S. President Joe Biden has stressed that the United States would not hesitate to defend “every inch of NATO territory.” But officials and experts hastened to dampen the notion that the Polish incident might lead to that.

Shortly after the news broke on Tuesday, Ben Hodges, a retired U.S. Army general, who commanded U.S. Army Europe and now is a senior advisor to the group Human Rights First, sought to cool the waters. “There is no such thing as ‘triggering’ Article 5. It’s not automatic,” Hodges tweeted. “There is no laser beam that opens a door like at a hotel or store if you walk thru it. Art 5 is a political decision. In this case, Art 4 Consultations seem appropriate, until we have more facts.”

Under Article 4 of the NATO Treaty, a member state could ask for a consultation from the NATO governing body.

Online, some anecdotal reports indicate that the “projectile” may have been the result of Ukrainian S-300 air defense system shooting down Russian missiles, which heavily targeted Ukrainian energy infrastructure on Tuesday.

“73 out of more than 90 CRUISE MISSILES shot down! As well as 10 enemy kamikaze drones!” Ukrainian Defense Secretary Oleksii Reznikov said on Twitter.

The U.S. currently has about 10,000 personnel in Poland, including the operators of two Patriot missile batteries, a U.S. military official in Europe said. The official told Defense One that there had been no changes to alert status or force posture as a result of the incident.

Sen. Mark Warner, D-Va., said in a statement, “As U.S. national security officials engage directly with Polish allies to confirm details about today’s events, the deaths of civilians following a reported Russian strike inside Poland underscore the disastrous and destabilizing effects of Putin’s unjust war. The United States has been clear in our continued support for Ukraine, as well as in our commitments to our NATO allies.”

In September, Joint Chiefs Chairman Gen. Mark Milley visited troops at an airbase in Poland close to the border to check on adequate force protection measures. “I don’t think [the threat of Russia to U.S. troops in Poland] is any greater or less,” he said at the time. But added “maintaining high degrees of force protection and readiness is always incumbent upon us.”