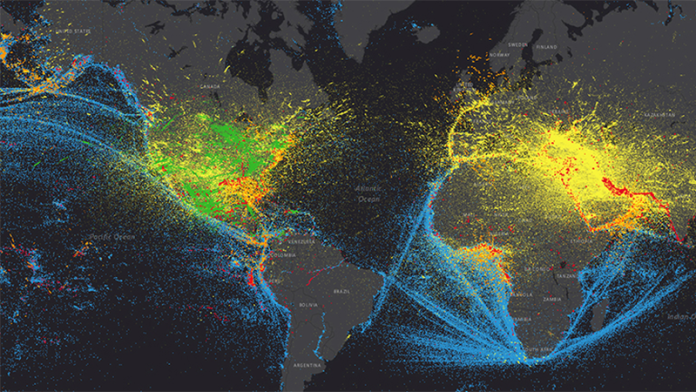 WASHINGTON — HawkEye 360 plans to launch a trio of radio frequency (RF) geolocation satellites next month to expand coverage over the Earth’s middle latitudes, and to bring the Virginia-based startup the capability to collect RF data as frequently as every hour anywhere in the world, according to company officials.

The new Cluster 6 trio will lift off sometime between Dec. 7 and Dec. 20 on a Rocket Lab Electron booster from NASA’s Wallops Island Facility — the first time HawkEye 360 will use the Electron and the first time Rocket Lab will fly from the Mid-Atlantic Regional Spaceport in Virginia, according to press releases issued by both companies last week.

HawkEye 360 currently has five “clusters” of three satellites, a total of 15 birds, on orbit around the Earth’s poles. The December launch will bring the total number of HawkEye’s RF geolocation satellites to 18. RF geolocation satellites detect sources of RF emissions. For example, they can pinpoint the location of GPS jammers, as well as the Automatic Identification System (AIS) signals used by ships to identify themselves and broadcast their location.

But rather than going into a polar orbit, the Cluster 6 birds instead will be stationed in an inclined orbit over the middle of the globe, explained HawkEye 360’s Chief Operating Office Rob Rainhart in an interview with Breaking Defense Thursday.

“This will be the first launch of ours at a mid-inclination. So it helps balance out the revisit rate for our customers, particularly in the mid-latitudes and around the equator. And it drives down that revisit rates that our customers see in those regions,” he said.

More than a few of those customers use .gov and .mil email addresses. The National Reconnaissance Office, for one, issued study contracts worth about $300,000 each to HawkEye 360 and five other RF geolocation providers in September. The Air Force Research Laboratory in January issued a three-year $15.5 million contract to the firm. And the Army signed a two-year, no cost Cooperative Research and Development Agreement with the company in August. In addition, the National Geospatial-Intelligence Agency (NGA) also last September granted HawkEye a contract to map RF emitters in different frequencies.

“Cluster 6 has some increased frequency reach on it —  it covers some higher frequencies. That gives us access to new new signals that we currently don’t have access to,” he said. “Earlier clusters went as high as 12 or 13 gigahertz; then we added up to 15 gigahertz. Cluster 6 will get us up to 18 gigahertz and that gets up into the lower regions of Ku-band interference monitoring applications.”

The company already has plans for launching 9 more satellites through the middle of next year, Rainhart said. Cluster 7, which should launch in February, will go up on a SpaceX Falcon 9 booster; Clusters 8 and 9 will again be launched by Rocket Lab together on the same Electron booster sometime mid-next year, he added.

Rocket Lab’s press release said the mission, cleverly named “Virginia is for Launch Lovers,” will be “the first of three Electron launches for HawkEye 360 in a contract that will see Rocket Lab deliver 15 satellites to low Earth orbit between late 2022 and 2024.” The launch will take place from the Virginia spaceport’s Launch Complex 2 specially developed for Electron launches, the release added.

“We are honored and excited to bring a new launch capability to Virginia’s Eastern Shore,” said Rocket Lab founder and CEO Peter Beck in the release. “Electron is well established as the leader in small launch, reliably serving the responsive space needs of the commercial, civil, DoD, and national security markets alike.”

5 Food Storage Myths That Are Ruining Your Stockpile