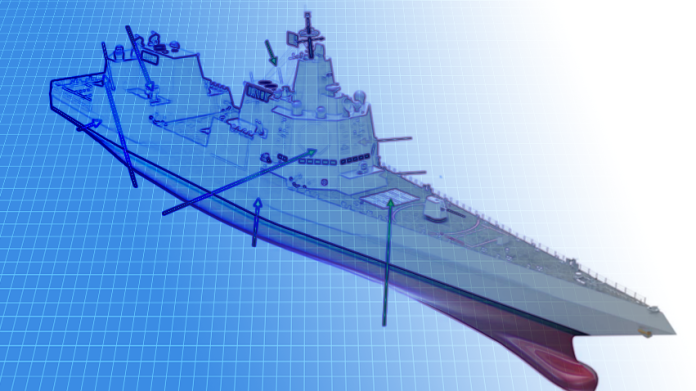 WASHINGTON — The US Navy’s next-generation destroyer, dubbed DDG(X), might cost roughly $1 billion more per hull than the service’s internal projections are forecasting, a non-partisan government watchdog has concluded.

That analysis is from the Congressional Budget Office’s annual report assessing the costs of the Navy’s future shipbuilding plans. The report, published on Nov. 11, found the service’s future destroyer will cost between $3.1 billion and $3.4 billion per ship, with anywhere between 29 and 47 vessels planned to be purchased after production begins in 2030. Meanwhile, the program as a whole, starting this year and running through 2052, would cost somewhere between $99 billion and $146 billion, the watchdog estimates.

By contrast, the Navy’s internal projections show each new ship costing between $2.3 billion and $2.4 billion depending on which version of the service’s 30-year long-term shipbuilding plan lawmakers pursue.

“Overall, the program represents roughly 30 percent to 40 percent of the difference between the Navy’s and CBO’s estimates of the total cost of the alternatives in the 2023 shipbuilding plan,” according to the new report. “The uncertainty about the ultimate size and capabilities of the next-generation destroyer suggests that its final cost could differ substantially from both the Navy’s and CBO’s estimates.”

The report represents a first glimpse into the potential costs of a nascent shipbuilding program with big shoes to fill. The Navy earlier this year during the Surface Navy Association’s annual symposium provided an initial overview of what the service — alongside the two private shipyards primarily responsible for building destroyers, HII and General Dynamics Bath Iron Works — have in mind for the next-generation destroyer.

DDG(X) will follow the service’s workhorse ship, the Arleigh Burke class, a vessel senior Navy officials have repeatedly stressed has already been been tightly packed with the best technology the service has at its disposal.

Historically, CBO routinely projects higher shipbuilding costs than the Navy. The reason for this is mostly due to the assumptions analysts must make when they consider the costs of materials, rates of inflation, levels of commonality among older vessels as well as a host of other variables. The further out construction remains, the more difficult it is to create a precise estimates.

The Navy, which has to defend its budget proposals to Congress every year, often provides more optimistic estimates than CBO, which has earned itself a positive reputation among lawmakers who see it as an objective third party scorekeeper.

Also impacting this year’s report is the unusual step the Navy took when it offered lawmakers three different long-term shipbuilding plans, rather than laying out a unified vision for the future force. The Navy defended that decision as necessary given the “uncertainty” and “fiscal reality” the service faces.

Nonetheless, the total quantity and rate at which ships are built have a direct impact on their cost, which means the precise cost of DDG(X) will necessarily differ depending upon which of the Navy’s “alternatives” Congress chooses.