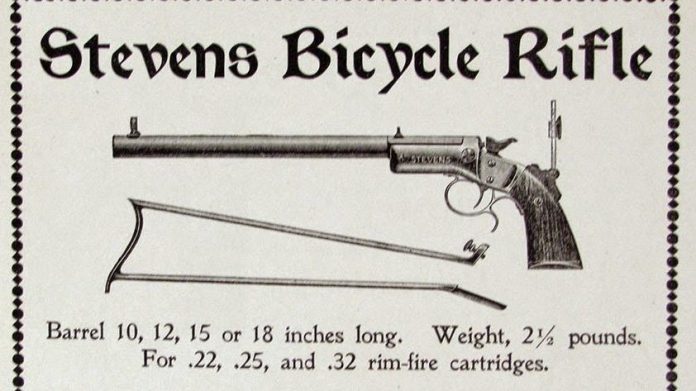 Hello and welcome back to another edition of The Rimfire Report! This ongoing series is all about the rimfire firearm world and its many guns, ammunition types, and of course its rich history as a special category of firearms and cartridges. Last week we talked a little bit about the basics of suppressing rimfire pistols and rifles. Suppressors are incredibly useful tools across a broad spectrum of firearms and related uses but I’ve found the most joy in combining the rimfire world with the suppressed one. This week we’re once again diving back into the history books to look at another family of somewhat forgotten rimfire guns – the J. Stevens Arms and Tool Co. Pocket Rifle or colloquial for the time – the Bicycle Rifle. This relatively obscure family of rimfire firearms was chambered in multiple varieties of rimfire cartridges, weighed less than 3 lbs, and was specifically marketed as a self-defense option in the late 19th century. Today we’ll look at the history of the J. Stevens Arms and Tool Co, some of their successes, the origin of the Pocket Rifle, and how it might have actually influenced some of the more modern firearms designs. The Steven’s Pocket Pistol saw great success upon its release and just 5 years later (1869), Stevens Arms would produce the first “Pocket Rifle.” The Pocket Rifle was essentially the same firearm as the Pocket Pistol but featured a larger grip handle, heavier, thicker, and longer barrels ranging from 10 inches all the way up to 18 inches, and of course a removable wire stock and flip-up iron sights attached to the rear of the grip. While it may seem strange that something nearly as long as what the ATF now considers to be the minimum length for a non-NFA rifle can be considered a “pocket rifle”, the pint-sized rimfire firearm was indeed intended to be carried in a long coat pocket. It’s worth noting here that by the late 1800s, Victorian-era fashion was already well on its way out but still the norm for many citizens and as a result, the smaller pockets that would dominate the fashion scene starting around the dawn of the 20th century.

The Stevens Pocket rifle was so popular that it put Joshua Stevens’ company on the map as a truly legitimate firearms manufacturer. Each rifle was made available in 22 Long Rifle, 25 Rimfire, and 32 Rimfire, and some models came complete with a special carrying case specifically designed for bicycles which lead to the Pocket Rifle being referred to as the “Bicycle Rifle” as a marketing tactic to broaden the appeal of the design to cyclers, outdoorsmen who wanted a backup to their centerfire rifle, or even those simply wanting a lightweight, compact, affordable, and accurate small caliber rifle. Each rifle was sold with its leather-bound, reinforced canvas case for just $7.50, shipped to anywhere in the USA to your front door. Stevens firearms were well known for being some of the most accurate designs around at the time with some users allegedly capable of remaining accurate on small 8″ targets at distances nearing 200-yards – with 22LR. Stevens Firearms always had accuracy as its highest goal and this spread to the company’s other ventures including some of the finest precision tools, firearms, and even automobiles. This vision of accuracy did seem to lead to Stevens’ firearms being well regarded as many professional target shooters of the time used Stevens rifles, even the ones that weren’t rimfire guns.

While the original price of the Stevens Pocket rifle was right around $8 at the time, modern collectors can expect to pay at least $1,000 or more for a rifle in good condition, even more, if you can find one with its bicycle case and included wire stock. The rifle sold very well in the United States but never gained popularity anywhere else on the globe. Why is anyone’s guess but if you forced me to come up with a reason, other countries for that time already had firearms licensing laws which forbade the personal carrying of firearms anywhere other than one’s own property which could have stymied the widespread adoption of firearms as every day carry items for citizens of other countries?

The design of the Bicycle Rifle and the Stevens Arms and Tool Co would later suffer at the hands of some ill-fated business near the start of The Great War. What essentially happened is that the New England Westing House Company purchased The J Stevens Arms & Tool Company and its facility in Chicopee Falls, MA as well as all of its holdings simply to fulfill a contract for 1,800,000 Mosin-Nagant rifles (affectionately known as “Garbage Rods” by TFB staff). During this time, Stevens did not produce any arms for the civilian market and thus, this is where the production history of the Pocket Rifle ends. Unfortunately, due to the assassination of the Russian Czar, the Westinghouse company was never fully paid for the 770,000 rifles that it produced which forced Westinghouse to eventually sell the company to Savage Arms in 1920 after the factory produced an unknown number of M1918 Browning Automatic Rifles (BAR) and a limited amount of civilian firearms. Stevens firearms do live on in a limited capacity today via Savage Arms but not many firearms like the Stevens Pocket Rifle have been produced by any company since. However, the spirit of the Stevens Pocket Rifle is arguably more alive today than it ever was back during its heyday. Compact rimfire firearms with attachment points for stocks or pistol braces are extremely popular today and many people opt for these features simply because they can take advantage of the compact size of the pistol but at the stability and accuracy potential that a stock provides making them convenient as self-defense or hunting weapons for travelers. In all honesty, I think the whole braced-pistol movement can largely thank J. Stevens for putting in the leg work for what would become one of the most controversial subjects within the firearms world in the 21st century.

I hope you all enjoyed this brief historical look at one of the most obscure rimfire firearms I’ve come across to date. If any of you have any extra or ancillary information from texts or books you’ve read on the subject, feel free to post them below. Additionally, I’d like to hear what your thoughts are on the initial concept of the pocket rifle and how it might have influenced future firearms designs. Thanks as always for stopping by to read The Rimfire Report and we’ll see you all again next week!

How to Read a Road Map Correctly In 5 Simple Steps

A Few Compost Recipes For All Your Different Garden Needs