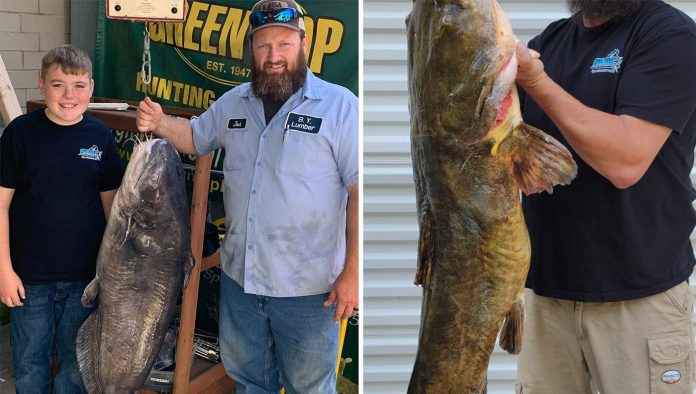 The Virginia Department of Wildlife Resources (VDWR) announced this past Thursday that the top spots in the state’s bowfishing record category for both blue and flathead catfish have been bested. The new state-record blue cat with a bow came out of the Rappahannock River and weighed nearly 70 pounds, while the state’s largest recorded flathead—with an official weight of 48 pounds—was recently arrowed in the waters of Belmont Bay.

Josh Bailey of Waldorf, Maryland, boated the 69-pound record blue cat. When he finally brought the giant fish ashore, it taped out at 3 feet, 11 inches and sported a 35-inch girth. Once certified by VDWR officials, it surpassed the previous record by more than 2 pounds. That fish was caught earlier this year by Jordan Emmel in the Pamunkey River and weighed 66.5 pounds.

Blue catfish are considered an invasive species in the Rappahannock River. According to the National Oceanic an Atmospheric Administration they’re invasive throughout the entire Chesapeake Bay Watershed.

Like blue cats, flatheads aren’t native to Virginia’s waterways. Both species were introduced decades ago with the hope of establishing a viable recreational fishery in the state. Top destinations for Virginia flathead fishing include the New, Staunton, and James River, along with Flannigan, Smith, and Claytor Lakes.

How to Get Started With Kitchen Scrap Gardening