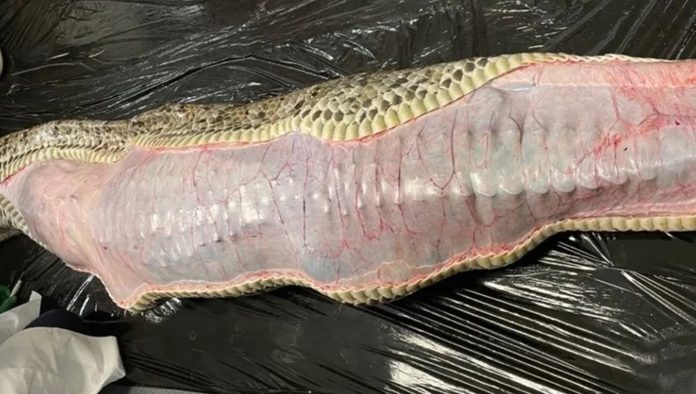 A giant python swallowed an alligator in Florida, and scientists captured the aftermath in a shocking video that’s going viral online. The 5-foot alligator was remarkably intact when researchers removed it from the stomach of a Burmese python during a necropsy at a Florida laboratory. The gator-eating python measured a full 18 feet in length after it was euthanized by workers at Florida Everglades National Park, according to the scientist who posted video footage of the necropsy on Instagram.

“[There was] just slight decay on the outer dermal layer [of the alligator],” Rosie Moore, the geospatial scientist who shot the footage, told USA Today. “The osteoderms (bony deposits on the skin) were completely intact.”

As Florida pythons go, an 18-footer is nothing to scoff at. The longest Burmese python ever captured in the Sunshine State was taken by professional snake hunters Kevin Pavlidis and Ryan Ausburn on October 2, 2020. It measured a full 18 feet, 9 inches long. The heaviest Florida python on record was taken earlier this year and weighed 215 pounds. There’s no mention in Moore’s post of how much the snake in her video weighed when the fully intact gator was still inside its stomach.

Burmese pythons are a destructive invasive species in the Florida Everglades. Inadvertently introduced in the 1970s, the snakes have taken a devastating ecological toll on south Florida’s native flora and fauna. As their numbers have ballooned well beyond the tens of thousands, they’ve been credited with substantial declines in bobcat, fox, raccoon, opossum, and rabbit populations. Florida’s pythons will also target whitetail deer when given the chance. According to researchers at the University of California Berkley, deer populations in the Everglades have declined by upwards of 90 percent, in the face of Burmese python predation.

Read Next: 10 of the Biggest Pythons Ever Captured in Florida

Pythons are native to Asia. In rare cases throughout their native range, the massive, non-venomous constrictors have been known to take down human prey as well. Earlier this month, an Indonesian woman was found inside the stomach of a reticulated python after she was reported missing by her husband when she failed to return home from her daily shift on a rubber plantation. That snake measured 22 feet long.

Fixed Blade or Mechanical Broadhead? Why not Both? – Bowhunting.Net