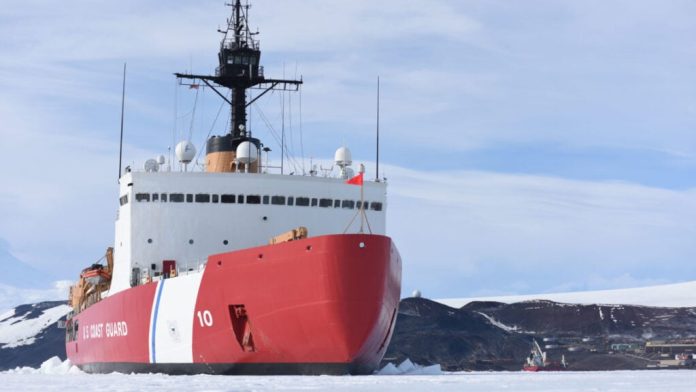 WASHINGTON — Two weeks after the US Navy sounded alarms about the state of its public shipbuilding infrastructure, a new private shipyard merger has closed, with one small firm buying out another that is currently building the US Coast Guard’s next-generation heavy icebreaker.

The merger, formally announced the morning of Nov. 7 and closed today, involves Bollinger Shipyards, of Louisiana, acquiring the Mississippi-based shipyard Halter Marine as well as another business unit belonging to Halter Marine’s parent company, ST Engineering. Bollinger CEO Ben Bordelon in a statement hailed the deal as one that “further strengthens our position in the U.S. defense industrial base.”

On the one hand, there are factors specific to Halter Marine that may have made it ripe for takeover. But analysts told Breaking Defense that the merger may be a bellwether for further shipyard consolidation, limiting the Navy’s options at a time when the service is trying to grow its fleet. It’s an eventuality the Navy could forestall, if only it could get its own shipbuilding plans in order.

Small shipbuilders “that build commercial and government ships cannot wait to get well financially until the Navy figures out its small combatant and [unmanned surface vessel] plans, and then take years to get hulls under contract,” said Bryan Clark, a senior fellow at the Hudson Institute.

The Coast Guard’s Cutter And A Cost Conundrum

The merger turns Halter Marine’s Mississippi facilities into satellite operations for Bollinger, which already has numerous sites across Louisiana. Perhaps most notably in the short-term, though, the deal also hands Bollinger control of the Polar Security Cutter project, a heavy icebreaker shipbuilding contract with the US Coast Guard valued at $2.6 billion and one of the service’s top acquisition priorities.

Bollinger paid $15 million up front for Halter Marine and will pay roughly an additional $10.3 million contingent on current contract performance and future deals being awarded, according to statements from both companies.

The price tag is strikingly low, analysts say, and part of why they say the Pentagon should be worried. That a shipyard with such a high-profile contract — not to mention the value of its land, facilities and other lesser contracts — would sell for relatively cheap implies there were troubles in operations, they said. A spokesperson for ST Engineering and Halter Marine declined to comment about the sale price as well as other issues analysts raised for this story.

Mergers like this one are a way for smaller companies to relieve financial pressure, Clark told Breaking Defense. And it’s no secret that Halter Marine has been under pressure: ST Engineering in its own statement said Halter Marine and the other unit sold, nicknamed STEHMO, “incurred a combined net loss before tax” of $256 million over the past five years.

As for the Coast Guard contract, top service officials last year told lawmakers the construction schedule for the Polar Security Cutter has slipped one year, and is now projected for delivery in the third quarter of fiscal 2025.

Analysts said there is also reason to believe Halter Marine underbid its offer to the service, an issue that may now compound itself as the company and Coast Guard work out who would foot the bill for future delays.

The service is aiming to build the first Polar Security Cutter for roughly $1 billion, with $746 million awarded to Halter Marine and the remainder representing other bills associated with the program, such as the third-party systems that will be installed onboard, usually referred to as “government-furnished equipment.”

It is difficult to judge how realistic that $1 billion figure is because of how infrequently the United States has produced heavy icebreakers. The Polar Star (WABG-10) and the Polar Sea (WAGB-11), the Coast Guard’s legacy ships, were commissioned in the 1970s.

But one of the primary metrics analysts consider when projecting a ship’s cost is its size. From that perspective, comparisons to recent US shipbuilding endeavors suggest its an overly optimistic price tag.

The Navy’s latest Arleigh Burke-class destroyers are less than half the size of the planned icebreakers with a $2.2 billion price tag. That ship’s price point is at least somewhat driven up by the copious amounts of high technology onboard. Meanwhile, the San Antonio-class amphibious ships are closer in size compared to the icebreakers, and the latest one, LPD-32, is projected to cost roughly $1.9 billion.

Timothy Choi, a fellow at the Canadian Global Affairs Institute, said most recently built icebreakers from the United Kingdom and Australia have characteristics that make them difficult to compare against the Polar Security Cutter. Choi offered Canada’s Polar Icebreaker as one potential analog. That vessel, a program announced in May 2021, was estimated to cost $3 billion Canadian dollars ($2.2 billion USD) by a government watchdog, he said.

With that in mind, Choi estimated that $1.5 billion USD for one Polar Security Cutter would be a more realistic price point for the US program — 50 percent more than what the Coast Guard projects.

The US Government Accountability Office has extensively studied the US Navy’s first-in-class ships and has shown the vessels almost always experience cost overruns and scheduling delays due to the complexities and unexpected problems that occur while building a brand-new ship.

Halter Marine’s sale to Bollinger “appears to be a tragically foreseeable consequence of underpricing the project and being held to a strict fixed-price contract,” Choi said. “For such yards [like Halter Marine] owned by larger companies with no other particular interests in the projects of the yard, they become an albatross that’s prime for removal.”

“Whether [Bollinger is] able to sustain the yard and the PSC project at a loss by making profit off their other projects will be a major question,” he added. 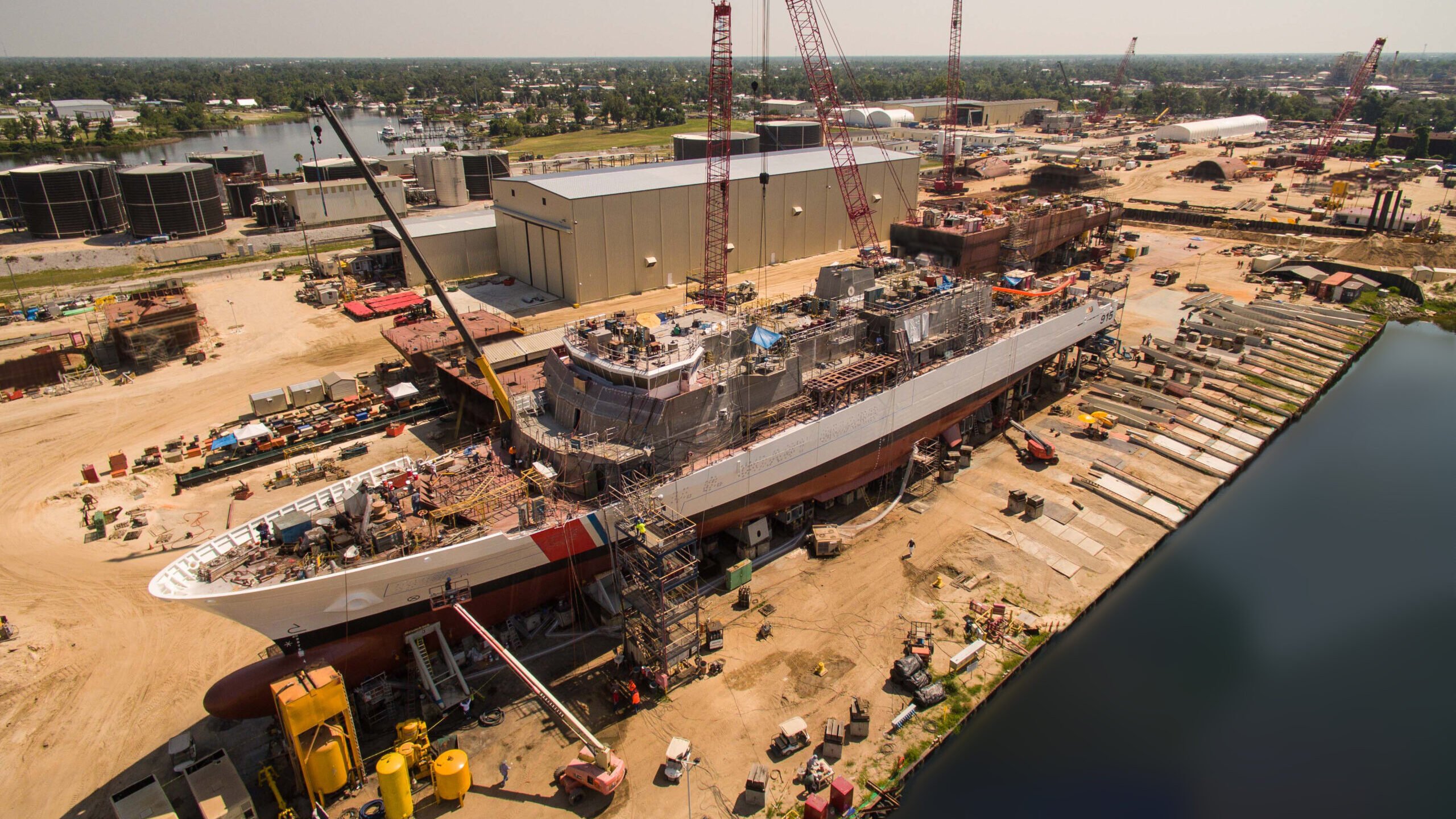 The Offshore Patrol Cutter is the US Coast Guard’s other top acquisition priority alongside the Polar Security Cutter. (Photo courtesy of Eastern Shipbuilding.)

If Bollinger can stabilize the Polar Security Cutter program and at least minimize future delays, it will surely raise its own profile in the world of military shipbuilding, one that is often dominated by a small group of the country’s biggest defense contractors. But the threat of smaller shipyards folding from a lack of work remains.

The value of even a single government contract for a small yard was on display last month when Eastern Shipbuilding Group, a Florida-based private yard, filed a lawsuit against the US Coast Guard for another chance at claiming the service’s other top shipbuilding priority, the second round of funding for the Offshore Patrol Cutter. Joey D’Isernia, the company’s president, in a November 2021 interview said that program’s first deal accounted for more than 50 percent of his company’s work. (For its part, the Coast Guard doesn’t comment on pending litigation but has defended its choice to award that contract to Austal USA.)

Should more mergers like Halter Marine’s follow, the bottom line for the US Navy is it will effectively have fewer vendors to rely on as it administers industry competitions for future shipbuilding contracts that will deliver the “distributed fleet” full of small surface combatants and unmanned vessels to which Clark alluded.

Jerry Hendrix, a senior fellow at the Indianapolis-based Sagamore Institute, said that until more is done — such as defense industrial base cash infusions often dished out by lawmakers — to help these small shipyards stabilize, the Pentagon should worry about these companies’ longevity.

“The US Navy, Naval Sea Systems Command [and] the US government have to take a more hands-on approach of managing the defense industrial base to include both the shipbuilding and the ship repair industrial base,” he said.

When asked to respond to analyst comments in this story, a Navy spokesman told Breaking Defense, “The Navy does not comment on the internal workings of private business.”

Infographic: The Deadliest Animals in the United States

“We know that the idea of perfect socialism is an oxymoron.”