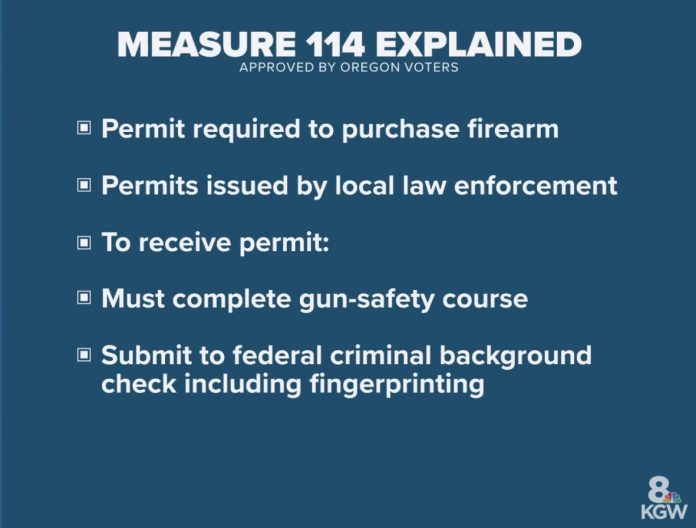 It was a sad week for gun owners in the Beaver State as Ballot Measure 114 passed into law by the narrowest of margins with just over 50 percent of voters favoring it.

Ballot Measure 114 implements all of the following:

The fee to apply for the license is $65 and renewal, which is every five years, costs $50.

The NRA-ILA strongly opposed the measure, calling it “the nation’s most extreme gun control Initiative.”  In a recent article, the pro-gun organization also detailed who was behind the push to pass BM 114.

Not surprisingly, a handful of wealthy elites put up the majority of the funding for BM 114.  NRA-ILA reported:

There was a huge funding disparity in the campaign contributions reported in relation to the measure, with $2,930,049.57 in support and $173,205.26 against. Large donations from single individuals made up most of the pro-Measure 114 funding, with Connie Ballmer, the wife of Steve Ballmer, billionaire and former Microsoft CEO, being the top donor with a contribution of $750,000, followed by Nicolas Hanauer ($250,000), and Bloomberg’s Everytown PAC donating an additional $155,000.

At least three Oregon sheriffs have already declared on social media that they will not enforce BM 114 in their respective counties.

“The Linn County Sheriff’s Office is NOT going to be enforcing magazine capacity limits,” wrote Sheriff Michelle Duncan in a post on Facebook.

“I agree 100% with Sheriff Duncan,” wrote Union County Sheriff Cody Bowen on Facebook. “This is an infringement on our constitutional rights and will not be enforced by my office!”

“Per [the sheriffs’] direction our office would not enforce Measure 114,” Undersheriff James Burgett of Sherman County told WWeek.com via email.

Lawsuits challenging the constitutionality of BM 114 from pro-gun groups are also expected to be filed in the coming days, according to OregonLive.com.

So while the anti-gun Billionaires who backed BM 114 may have won the first round, this fight is far from over. As always, stay tuned for updates.

Movement Drills To Help You Succeed -The Firearm Blog