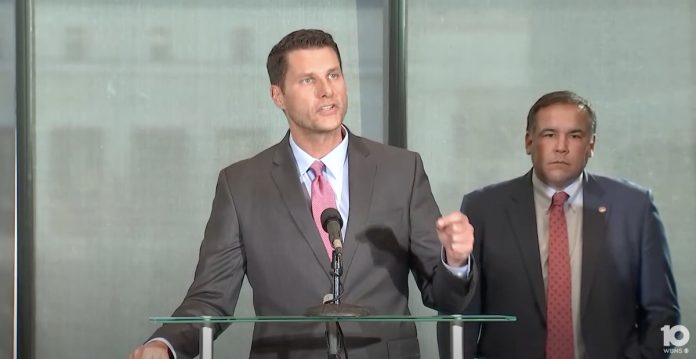 The city of Columbus, Ohio, is attempting to enact gun control in spite of the fact that only the state legislature has the power to regulate firearms.

Last week, city leaders unveiled a sweeping proposal to, as they see it, “reduce gun violence.”

“Today we are taking local action to reduce gun violence in Columbus,” said Andrew Mayor Ginther in a press release obtained by GunsAmerica.

“Every person in every neighborhood deserves to be safe,” he continued.  “These proposed new laws bolster the work of the Comprehensive Neighborhood Safety Strategy and get more guns out of the hands of those who misuse them.”

The package would do all of the following:

“Gun violence plagued Columbus’ neighborhoods in 2017, yet the Statehouse handcuffed responsible local officials, preventing them from enacting the most basic gun safety laws. We are proud to stand with Mayor Ginther and City Attorney Klein to put forth specific steps to reduce the number of guns on the street and keep our neighborhoods safe,” said City Council President Hardin.

As mentioned, city leaders do not have the power to enact municipal gun laws under the state’s preemption statute. So why are they pushing this proposal?

They claim a judge opened the door with a recent ruling that created a loophole in state law with respect to firearm regulation.

“The preliminary injunction remains in effect and the legislative calendar being laid out by leaders at City Hall remains unchanged,” noted City Attorney Zach Klein in a statement, per WSOU.

“The City Attorney’s Office is ready to continue this lawsuit once the stay is lifted so that we can make the injunction against the State’s unconstitutional firearms law permanent,” Klein added.

However, the Ohio Attorney General has already stepped in to both appeal and block that ruling, according to the Buckeye Firearms Association (BFA).

This case has been developing rapidly, so let me give you a quick history of preemption and a summary of what has been happening recently.https://t.co/91enyUKJF6 pic.twitter.com/qvlE7MCf58

Unless there is a change to the state’s preemption statute that comes from the legislature, it’s unlikely that Columbus’s gun control policies will stick in the long run.

In the short term, both sides are going to be battling it out in court.

“Preemption is settled law in Ohio. And the Ohio Supreme Court has already ruled on it. This is yet another attempt by the City of Columbus to override state law and pass gun control laws they have no right to pass,” the BFA said in a statement to 10tv.com.

“The city ran a study not so long ago that showed where most of the violence is coming from in the city, so what are city officials doing about that? Why do they insist on passing laws that affect the law-abiding and which criminals will never obey? Why don’t they focus their efforts on the real criminals?” BFA continued.

“The whole idea of having statewide preemption regarding firearms is to provide a consistent set of laws throughout the state, rather than a patchwork of laws that will entrap and confuse people and infringe on their Second Amendment rights,” BFA concluded.

GunsAmerica reached out to Alan Gottlieb, the founder of the Second Amendment Foundation, for comment. Gottlieb also believes Columbus city leaders will lose in the end.

“The city of Columbus is clearly prohibited by state law from passing and enforcing this gun law,” he told GunsAmerica via email. “The state of Ohio will win their lawsuit and Columbus will lose. I applaud OHIO for suing the city of Columbus to protect both state law and the people of Ohio.”

Remington Partners with the NCSSAA to Provide AmmunitionThe Firearm Blog

From HIMARS to helos: What the US has given Ukraine [GRAPHIC]