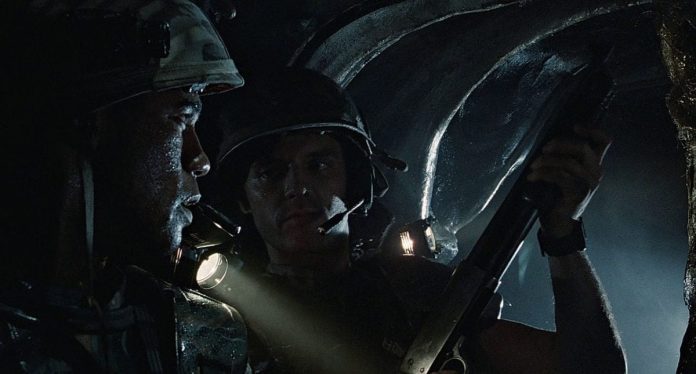 “I like to keep this handy for close encounters….” The immortal word of Corporal Dwayne Hicks has echoed on into eternity.

It’s become a solid part of pop culture, and it’s just a perfect line for that part of the film. In 1977, Close Encounters of the Third Kind premiered and became a genre-defining alien film.

In 1986, Aliens became another genre-defining film.

Part of the reason was the mix of horror, action, aliens, and even a little comedy.

Part of those visuals is the weapons. They look rough, old, and beat up.

However, they aren’t the subject of today’s discussion.

No, today, we are talking about the custom Ithaca 37 Shorty wielded by Corporal Hicks.

The Ithaca 37 in the film is far from futuristic, and that lends some credence to the dystopian and dirty feel of the movie.

Far From the Future

Aliens takes place in 2179, which is a long way from 1937 when the Ithaca 37 premiered. Ithaca watched Winchester dominate the shotgun market with the 1897 and Model 12. They wanted a piece of that sweet pump shotgun pie.

They started with the Browning-designed and Pederson-improved Remington Model 17 and began to make improvements to simplify production and lower cost. Then, they reportedly altered the firing pin and ejection mechanism.

Remington designed the Model 17 to be a 20-gauge gun, but Ithaca went with multiple calibers, including 12-, 20-, 16-, and 28-gauge. While the gun was ready in 1933, they had to wait for the expiration of patents from Browning and Pederson to sell the gun.

If you’re familiar with U.S. history, you might know that 1937 wasn’t a great time for the United States. The Great Depression was in full effect.

It wasn’t until after WWII that the Ithaca 37 became an American legend. The Ithaca 37 was more popular than the Model 17 ever was, even though they took several features from the Model 17.

This includes the fact the loading and ejection ports were under the gun. It ejected the shell straight downwards at the feet of the shooter. Over time, the Ithaca became popular as a hunting firearm and a tactical weapon.

The trench variants and police models saw decades of service in their respective roles. One variant was known as the Stakeout and featured a pistol grip only set up with a 13-inch barrel for low-profile use.

The Stakeout variant would be the closest factory variant of Hick’s blaster.

A Far Away World

Hick’s model is fairly interesting. The receiver features the famed Ithaca engraving reserved for bird guns of the series but also a super short barrel and pistol grip-only configuration.

The barrel length is tough to say, but it’s likely closer to 13 inches than 18 inches.

The Armorer didn’t forget iron sights, either. We have a front sight on the barrel and a set of rear sights on the receiver.

I’ve never seen any other Ithaca with this sight setup, and it does give a nice, long sight radius.

At the rear, the pistol grip is an amalgamation of an MP40 design.

Although it’s covered in tape and you can’t see it, the stock is removed, and a big circle sits where it’s supposed to be.

This custom hack job used a portion of the original wood stock to attach the pistol grip and stock mount to the gun.

It’s a fascinating, unique Ithaca 37 that fits in with the dirty, grimy world. Hicks uses the gun to decapitate a Xenomorph by sticking the gun in its mouth and blowing its head off.

The resulting carnage results in acid blood destroying the gun, and it is abandoned. It’s hardly used and never seen super well in the dark film, but it’s a gun that left an impression.

Enough that it’s become a big part of Aliens and Colonial Marine lore with the gun popping up in most Aliens video games. It’s cool, stylish, and clearly effective.

What did you think of Aliens? Give us your thoughts in the comments below. For more Guns of Pop Culture, head to our Fun Category!

Infographic: The Most Dangerous Hobbies